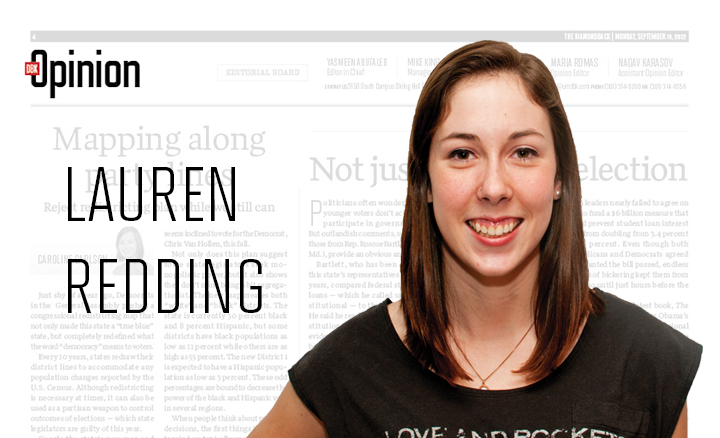 At the end of fall 2011, when I was editor in chief of The Diamondback, I wrote a column titled, “An editor’s confession: I have depression.” I wrote it after a close friend attempted suicide — it was my way to shed a little light on such a dark, scary issue. The response was overwhelming: Hundreds of people wrote to me, thanking me for sharing my struggle with depression and my long-standing relationship with Prozac.

People told me I was brave. They told me I was inspirational. The love and support I received was amazing — but I also felt guilty. Because it wasn’t the whole story. I wasn’t ready to tell my whole story yet. A year and a half later, I think I am. So, (deep breath), bear with me. Here’s take two.

I was raped. R-a-p-e-d. God, that’s such a horrible word. As many times as I’ve said it since it happened — spring break of my sophomore year, right before I took over as editor in chief — it still hurts like hell to see it in front of me. But it’s the truth. It’s the reason my depression took the sharpest nosedive of my life. It’s the reason I spent most nights sobbing, huddled in a ball on my bed, unable to find any word in the English language to describe how profoundly and desperately I was hurting.

I was raped. By someone I knew, trusted and valued. The worst part? My inability to tell anyone. I felt like I was drowning and I couldn’t even shout for help — I didn’t think I deserved help. I felt worthless, dirty and guilty. So, so guilty. I just knew, I knew that I was the person responsible for what had happened, not him. I was too drunk. I was too flirty. I led him on. He didn’t know any better. I did want to have sex with him. He couldn’t hear me say, “No.” He was drunk, too.

I stayed silent for six months — six long months of constantly being on the verge of tears, not being able to eat, not being able to sleep and staying in bed for days. Six months of putting on a brave face as I put out this newspaper day after day and then going home and sobbing in the shower. (The sound of the water covered my wails.)

It wasn’t until a complete breakdown landed me back in the psychiatrist’s office that I finally got some help — weekly therapy sessions and a prescription for Prozac. Finally, I could eat. Finally, I could sleep. And even though I couldn’t yet say the “R” word, I was beginning to accept what had happened to me — at least in my head.

It took several more months before I could tell my friends and family why I had suddenly gotten so passionate about feminism and violence against women — I became president of UMD Feminists and a peer educator for the Sexual Assault Response and Prevention Program. With the help and support of my amazing SARPP family — a group of people who saved my life — I slowly started saying the “R” word.

Now that my entire family and all my Facebook friends know, I’m ready to share it with you. Because I’m guessing, for some of you reading this, my story is all too familiar. And so I want to tell those of you in a similar position something you should have heard a long, long time ago. No one said it to me for a long, long time, so I’m going to say it to you now:

Someday, the weight of what happened to you won’t seem so heavy. But here’s the thing: The key is to let other people help you carry it. It will take time, I know. Maybe you’re not there yet. That’s OK. But I hope, just by reading this, that weight already feels a little bit lighter. I hope by sharing my story, you know it is safe for you to share yours.

When you’re ready, I’ll be here. Thanks for reading, friend.

Lauren Redding is a senior journalism major and former editor in chief of The Diamondback. She can be reached at laurredding@gmail.com.