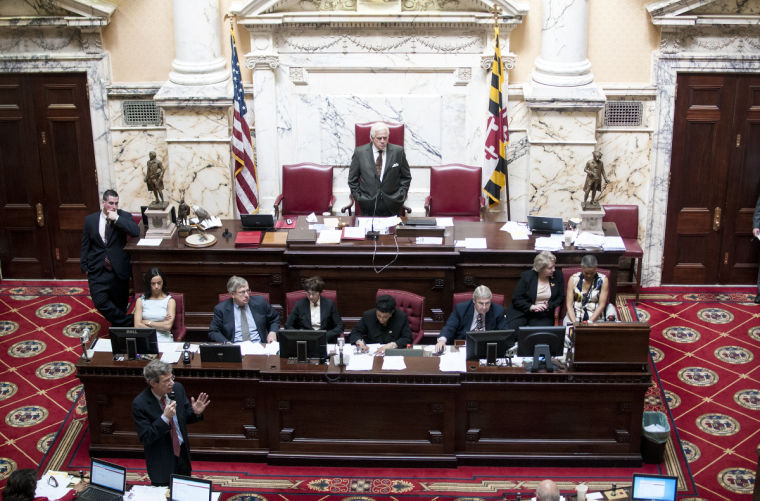 The State Senate voted on hotly contested issues well before Sine Die, the last day of the legislative session. Debates on measures such as gun control, the death penalty repeal and offshore wind energy farms were long gone, leaving breathing room for issues such as medical marijuana and the Open Meetings Act.

The State Senate voted on hotly contested issues well before Sine Die, the last day of the legislative session. Debates on measures such as gun control, the death penalty repeal and offshore wind energy farms were long gone, leaving breathing room for issues such as medical marijuana and the Open Meetings Act.

The nation’s foremost gun lobbying group is taking the state’s new gun control measures to task by planning to challenge the constitutionality of the law in court.

Earlier this month, Gov. Martin O’Malley secured a victory after the General Assembly passed one of the country’s strictest gun control measures, which bans certain firearms designated as assault weapons, imposes more rigid background checks such as fingerprinting requirements and limits the number of rounds permitted in an ammunition clip from 20 to 10. But a lawsuit could follow after O’Malley signs the bill into law, as several news reports indicate the National Rifle Association will sue the state on charges that the bill violates Second Amendment rights.

Amid fierce debate in the General Assembly in March, many opponents of O’Malley’s catchall gun bill invoked the Second Amendment, arguing the bill’s provisions make it more difficult for law-abiding citizens to obtain guns, thus infringing upon their “right to keep and bear arms.”

“This bill is full of licensure requirements, registration requirements, fingerprinting and outright bans of whole classes of commonly held weapons,” said Del. Steven Schuh (R-Anne Arundel) on the floor of the House of Delegates less than an hour before the April 3 vote. “Taken together, this bill is an astounding infringement of our Second Amendment rights.”

House Minority Leader Anthony O’Donnell (R-Calvert and St. Mary’s) said the Second Amendment is less about owning firearms and more about allowing people to protect themselves from a government “so big, so strong and so out of control.”

“I think the Second Amendment protects us from the government taking that right away,” O’Donnell said during the debate. “It’s our obligation, for some of us, to fight for that Second Amendment right because we take seriously our oath to uphold it.”

Opponents such as Del. Patrick McDonough (R-Baltimore and Harford) initially discussed petitioning for a referendum and putting the bill to a popular vote in the 2014 election, in the same way the same-sex marriage bill and the DREAM Act were added to the ballot in 2012. However, Del. Neil Parrott (R-Washington), the primary force behind 2012’s petition drives, said he wouldn’t pursue the same route this time.

Parrott has garnered support from the state gun lobby not to bring the bill to a vote and instead see how it plays out in the courts.

“We fully support Del. Parrott’s decision to not pursue a strategy of taking [the Firearms Safety Act of 2013] to a referendum,” said John Josselyn, Associated Gun Clubs of Baltimore legislative vice president, in a statement. “We agree that God-given rights enumerated in the United States Constitution should not be the subject of a referendum in Maryland or any other state.”

The organization also supports the move “to pursue litigation to address the most onerous and unconstitutional provisions in the bill,” according to a news release.

The courts will likely side with the bill, said Vincent DeMarco, state gun control lobbyist and president of Marylanders to Prevent Gun Violence.

“I do think that they are mistaken in their belief that the law is unconstitutional — the law is clearly constitutional,” DeMarco said. “This law saves lives and does not infringe any lawful gun owners’ rights.”

The NRA and the gun lobby “will lose in court, absolutely,” he added.

Though a referendum effort seems unlikely, given the opposition’s intent to pursue legal action, the bill could still be subject to a petition effort, DeMarco said. But if that were to happen, he added, state voters would side with the bill.