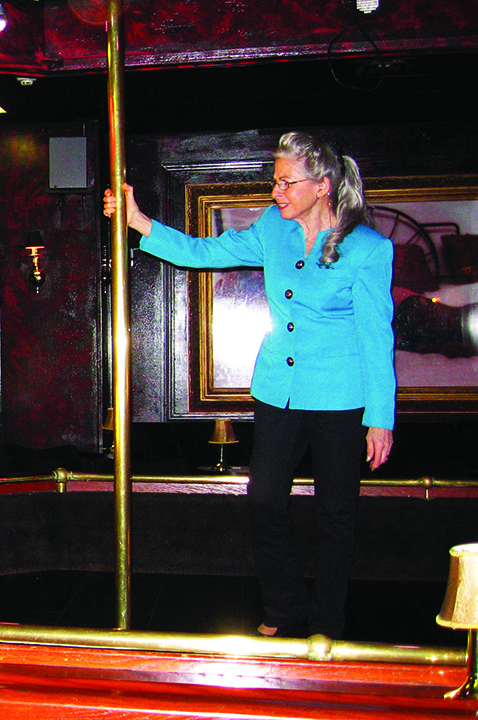 Judith Hanna, a university anthropology research scientist, advocates for exotic dancing and stripping to be recognized as a form of art. She recently appeared on an episode of The Colbert Report.

Judith Hanna, a university anthropology research scientist, advocates for exotic dancing and stripping to be recognized as a form of art. She recently appeared on an episode of The Colbert Report.

When Jacksonville legislators tried to pass an ordinance that would require strippers to wear boy shorts in 2005, Judith Hanna took matters into her own hands.

The then-69 year-old grandmother headed out to the beach and spent the day snapping pictures of women wearing thongs — evidence the university researcher later submitted to the court in the fight against this regulation.

That was just another day on the job for the university anthropology research scientist, who has served as an expert court witness in more than 150 exotic dance and strip club cases since 1995. In September, Hanna’s expertise took her to an Albany, N.Y., nightclub for the filming of The Colbert Report’s “Difference Makers” segment, which aired Nov. 8.

“My initial thought was that it would be fun to do,” said Hanna, a self-proclaimed fan of the show. “But I didn’t want to be part of a program that demeaned the dancers because the biggest problem that the dancers have is the unwarranted stigma.”

This “stigma” is one Hanna had been fighting to eliminate for more than 15 years, and her mission is for lawmakers to recognize exotic dance as a constitutionally protected form of expression.

For the Comedy Central segment, Hanna recounted a 2008 case in which an Albany nightclub owner argued he should not have to pay sales tax for his club’s exotic dance performances. She argued the case was an issue of the First Amendment: by state law, a “live, dramatic, choreographic or musical performance” was exempt from sales taxes, and Hanna contended tax auditors were discriminating against artistic expression based on content.

As a dancer slid down a pole in the background, Hanna went on to read aloud some of the exotic dance moves featured in her book, Naked Truth: Strip Clubs, Democracy, and Christian Right. She even demonstrated the “butterfly” technique for the cameras, and Hanna estimated the film crew recorded 10 hours of material, with a great deal being left on the cutting room floor.

“It was fun. It was a new experience for me,” Hanna said.

However, some dancers were unhappy with the segment that eventually made it to air, she said. And Laurie Frederik Meer, a theatre professor who frequently works with Hanna, worried the satirical nature of the Colbert segment might undermine the gravity of Hanna’s work.

Hanna first began her career as an expert witness when she was contacted for a Seattle case involving table dancing in 1995. Since then, Hanna estimates she has watched about 400 exotic dance performances across the country. She has also written several books on anthropology and dance and spoken at more than 50 colleges nationwide.

“I know the seriousness of her work and the incredible amount of research that she’s done on it, so there was a bit of making fun of the expert,” Meer said.

Her work has been met with its share of criticism, even by fellow advocates of rights for exotic dancers. In response to a July 2001 piece Hanna wrote for The New York Times, “Wrapping Nudity In a Cloak of Law,” a reader submitted a countering editorial.

“The article compares strip joints to art spaces and their patrons to ‘museumgoers’ who are allowed to ‘move around and marvel at living sculpture,’” wrote T. L. Sobel of Manhattan. “The reality is very different. … Strippers have relatively short careers and few benefits or opportunities for economic advancement, and many depend on alcohol and drugs to provide the emotional numbness needed for a career in exhibitionism. Is this the ‘female empowerment’ to which Ms. Hanna refers?”

However, it is religious right-wing politicians who are to blame for the discrimination against exotic dance, Hanna argues.

“I think what people do not realize is how strong the Christian right is at the local and state level around the country,” Hanna said. “This is just one other issue of trying to eliminate the separation of church and state, and that’s pretty serious business.”

She also disagreed with an assertion made in the final Colbert Report segment, that the Albany nightclub owner, Stephen Dick, was “the Martin Luther King of exotic dance.”

“He may make a difference if he ends up winning the case,” she said.

Overall, Hanna said she enjoyed the final product and received positive feedback from her peers, including people she had not heard from in 20 years.

While her work may be unconventional, Hanna hopes it will lead people to think differently about freedom of expression.

“She uses her current research as a stepping-off point to discuss bigger concepts,” Meer said.