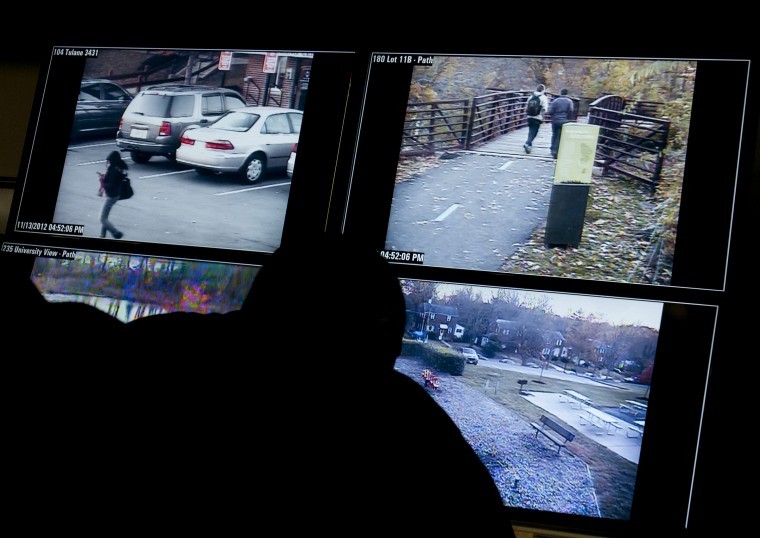 A few miles off the campus, a massive complex houses the eyes of University Police — all 600 of them.

Six people constantly monitor 350 cameras on the campus and surrounding areas from inside the security operations center, residing in the $12 million, 300,000 square foot building which was once The Washington Post’s production plant. Another 250 cameras store data accessible at any time, University Police spokesman Capt. Marc Limansky said. These cameras are part of a move toward increased use of technology in police operations, a trend Limansky said allows police to operate more efficiently.

“We’re closing out cases much more quickly than we used to because of these advancements,” he said. “We’ve added technology to supplement [officers], to make us more efficient.”

Outside the former plant, a painted Testudo statue hints at a university tie to the building, purchased in 2010 to hold university services and make room for the East Campus development. The center operates out of a small room, its temporary home until the Pocomoke Building is renovated. It is a command center of sorts, with multiple large screens across the wall and smaller computer stations.

Students walk to class, across Route 1 and through Old Town daily, all in view of the center’s cameras, which can be manipulated to zoom and pan in all directions. The video is crisp and clear, allowing security to pick out faces and license plates if necessary and to run plates through an automatic reader to alert police to potentially dangerous individuals.

“The owner [of a vehicle] could be wanted, be a sex offender, on a terrorist watch list,” Limansky said. “We can put people in [the automated license plate reader] that are of interest to us.”

While technology has long been an important component of police operations, Limansky said advances have created a more efficient force. In the past, VHS tapes had to be switched out every hour, according to Security Operations Center coordinator Caryn Russell. Now the staff can use a joystick and a lit keypad to control more than 350 different cameras. University Police keep most data for 30 days, Limansky said.

Michell Min, a junior accounting and business major, said she was surprised the university operates surveillance to that extent. Knowing police technology is constantly recording student actions is a little disconcerting, she said.

Cameras don’t merely monitor activity around the campus and community from stationary posts — they are also in police cars, Limansky said. These cameras constantly record and delete until the officer activates his or her lights, prompting the system to save data recorded from two minutes prior to the activation until two minutes after the lights are off.

When officers are close to the station, hard drives in the cars wirelessly upload the video to servers. Officers used to load VHS tapes into the trunk.

University Police recently received a grant from the governor’s office for a Situational Awareness Module, Limansky said. The module will allow local police and fire departments to pool together dispatch data from all nearby jurisdictions. Limansky said the technology is the next step in real-time information sharing between agencies.

An update to the university’s alert system is also on the horizon. Police hope to soon be able to broadcast alerts into buildings so students, faculty and staff without cell service or Internet access can still receive alerts. SMART Boards will also be able to receive the data from police, Limansky said.