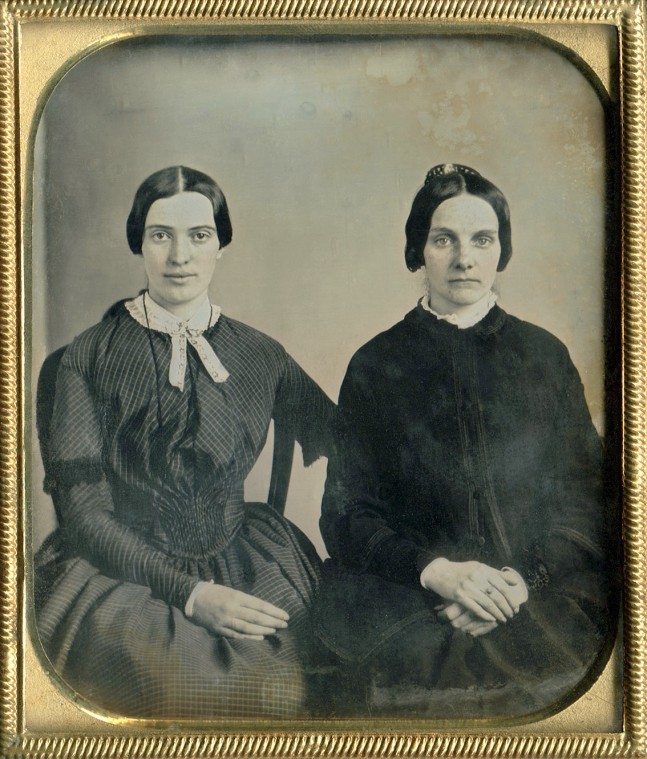 Emily Dickinson (left) is likely depicted in the above photograph, only the second-known picture of her.

Emily Dickinson (left) is likely depicted in the above photograph, only the second-known picture of her.

As a graduate student, Martha Nell Smith noticed something in a book of Emily Dickinson’s poetry and personal letters — although there was only one known photograph of the writer, she’d penned in one of her letters, “I will tell you about the picture. If I can, I will.”

Smith jotted a note in the margin: “Is there another photograph?” Then she turned the page and forgot about it.

That is, until emails from a collector began populating the university English professor’s inbox in early 2008. Smith, who has written five books about Emily Dickinson, was used to getting mail from people who thought they had discovered antiques and belongings related to Dickinson, and she was wary of this collector’s claims. But after sending him a somewhat dismissive thank-you letter, he still insisted he had found something new — only the second known photograph of the 19th-century writer.

“I’m telling you, I really, really have a photograph of Emily Dickinson,” wrote the collector, who has since asked Smith to keep his identity secret.

The two were in correspondence for more than a year. In the summer of 2009, the collector said he would be in Washington, and Smith agreed to meet with him. They sat down for an early dinner near the White House and the collector flipped his laptop open.

“He shows me the photo and I had to work hard to remain impassive,” Smith said. For the first time, she thought, “Oh. This really could be Emily Dickinson.”

Smith said she was already somewhat convinced, but she needed scientific proof. She said the collector, who bought the relic in 1995 from a junk dealer, needed to test and verify the photo at his expense. It was after a specialist at Dartmouth University Medical School confirmed its authenticity that Smith rediscovered her note in the letter’s margins and other evidence to suggest a significant discovery had been made.

For Smith, uncovering the photo goes beyond just an academic discovery. It also serves as a memento of the poet she has loved since childhood. She read a Dickinson poem here and there in early English classes, but it was when Smith was grounded and home alone at her older brother’s house that she truly became engrossed in the poet’s work.

“I loved it. I mean, I just got completely absorbed. I stole his copy of Emily Dickinson, which I only recently gave back to him,” she said.

When Smith went to graduate school at Rutgers University, most of her advisers said she wouldn’t have a career if she studied Dickinson. But after nearly dying in a car crash, Smith’s priorities shifted, and she said, “You know what? I’m going to work on what I want.”

Her renewed dedication inspired a graduate dissertation and one day, sparked some dialogue with a peer, Marilee Lindemann, now Smith’s partner of 28 years and director of the university’s LGBT studies program.

“We got into this really lively conversation about Emily Dickinson and feminist theory,” said Lindemann, a university English professor. “I think of that as the first serious conversation we ever had.”

It’s only fitting the photograph contains a possible Dickinson sitting with her arm around a woman, Kate Anthon, dressed in black. In her works, Smith has speculated Dickinson was “passionately in love” with Anthon, as well Dickinson’s own sister-in-law.

A year earlier, the collector had brought the photo to Amherst College to show the archives staff and took up correspondence with the school’s Archives and Special Collections specialist Margaret Dakin again in 2008.

“In a way, I didn’t know much about Dickinson at the time. I had not yet drunk the Kool-Aid,” Dakin said. “My interest in her really, really revved up after this picture came to light.”

The pair and Smith began researching and working in tandem. Over the last few months they picked up their pace to go public with the photo and corresponding information on Smith’s website, emilydickinson.org, as well as at the Emily Dickinson Museum and the Amherst College Special Collections. The site went live Tuesday, though news broke earlier of the photo’s existence.

Smith and Dakin said since the newly discovered image dates back to approximately 1859, they no longer have to base their perception of Dickinson off the original photo of her as a teenager.

“There’s only been one photograph of her that’s known,” Smith said of the original from 1847. “It would be like me being known by my 16-year-old high school yearbook picture. And I look different now.”

“I think what’s fascinating to me is to see a mature person there,” Dakin said. “If this is Dickinson, then we are looking at the real poet, the poet that wrote so much of the verse that’s important to us now.”

Smith said the photo also may help dispel some stereotypes about Dickinson, such as the idea that she was a withdrawn, brokenhearted poet, which was perpetuated by the fact that Dickinson looks young and weak in the original photo.

“She’s looking straight out in this new photo. That’s not a shrinking violet who’s looking out. She also looks very assertive and confident,” Smith said. “It’ll show she’s not a recluse. It will show she’s not writing in isolation. And it will also show she’s much stronger in this photo than in the other one.”

Smith and Dakin said they hope the photo, which still belongs to the collector, will end up at Amherst College, which was co-founded by Dickinson’s grandfather, Samuel Fowler Dickinson.

“This would certainly seem like the natural place for it to be,” Dakin said.

Lindemann said Smith has brought “relentless focus and discipline that comes from deep passion for what she’s doing” to her work.

In addition to “intellectual stimulation,” Smith said she was drawn to Dickinson because of her works and their passionate expressions.

“I have colleagues who tell me routinely that they’re scared to teach her because she’s too hard, and that just gets me really excited,” Smith said. “I think she’s really sexy.”