Microgreens have up to 40 times more nutrients, researchers discover 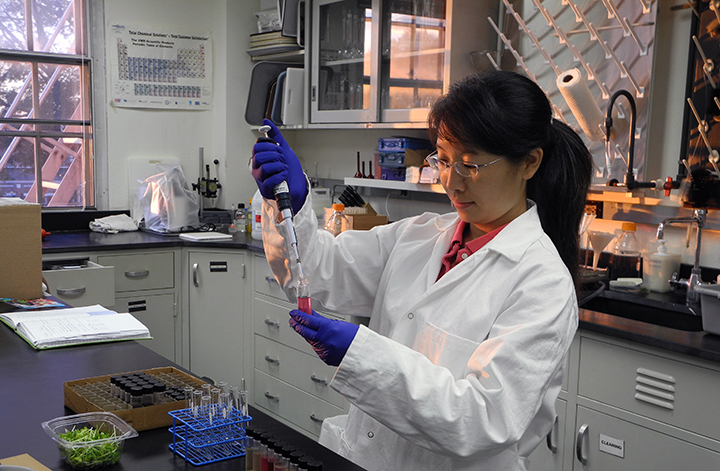 All greens great and small

All greens great and small

Those tender baby microgreens used to add a splash of color to dishes in upscale restaurants are good for more than just decoration, according to new studies by university and government researchers.

In the first comprehensive study of these trendy mini-plants — tiny, immature versions of vegetables, herbs and other plants harvested anywhere one to two weeks after germination — a group of four scientists of the agriculture and natural resources school and the U.S. Department of Agriculture confirmed microgreens may be packed with up to 40 times more nutrients and vitamins than their matured counterparts, planting the seeds for additional research and more widespread consumption.

“The finding was completely shocking,” said USDA research plant physiologist Gene Lester. “We were aware that greener vegetables tend to be better, but we did not expect them to be so nutrient-dense, especially given the little time they have for development.”

It’s this blast of flavor and nutrients that inspired the scientists to explore the untapped potential of microgreens, which are usually 1 to 2 inches long with stem and leaves attached.

“Forget the phytochemical nature — all I thought when I first saw them was they’re just so cute and pretty,” Xiao said. “They’re really just a ball of intense flavor, vivid colors and crisp texture, and with the added nutritional benefit, you really can’t get any better than this.”

Wang, Xiao’s supervisor, added that much of the project’s inspiration stemmed from the food’s physical appearance.

“It was funny, because here we were doing all these precise measurements — spectrometry, precise analysis and extraction — but some of our initial inspiration stemmed from the simple observation that they were just so cute,” Wang said.

With this groundwork in place, scientists hope microgreen awareness will translate from the laboratory to grocery stores.

The small plants are commonly used as decorative ingredients to add color, texture and flavor to meals at high-end restaurants. Now grocery stores are beginning to welcome the microgreen market. Wegman’s, an upscale market, expressed interest in the researchers’ work, but because of their high price and limited quantity, microgreens still sell on a micro-level.

Because such a limited supply of these greens exists, the scientists had to custom-order them from California, Wang said.

“Upscale restaurants and grocery stores cater this product because it is pleasing to the eye,” she said. “But hopefully, once demand of the product increases, given its nutritional value, supply should as well.”

Scientists still grapple with questions ranging from how the microgreens should be packaged for a consumer market to how much light they should be exposed to, and they advise consumption of the greens in moderation until researchers complete further comparative research.

“How should farmers optimally grow these microgreens? How can use increase their shelf life without nutrient degradation? What kind of packaging is best — microfilm or something else?” Xiao said. “There’s a lot of potential for research, and we’ve already started working on it.”

Katrina Bynum, a freshman enrolled in letters and sciences, said she would be open to trying microgreens if they were available in dining halls on the campus. However, she said she doesn’t want to shell out extra cash for the mini vegetables.

“I’ve always thought they were used to make pasta look pretty and colorful,” she said. “The bottom line is, as it is with buying organic food, the costs can outweigh the nutritional benefits.”

Lester said researchers hope to test microgreens at a consumer level at a workshop next week.

“This is what I love about what I have to do,” Lester said. “You work at such a minute level and discover profound things: size and light retention isn’t everything.”