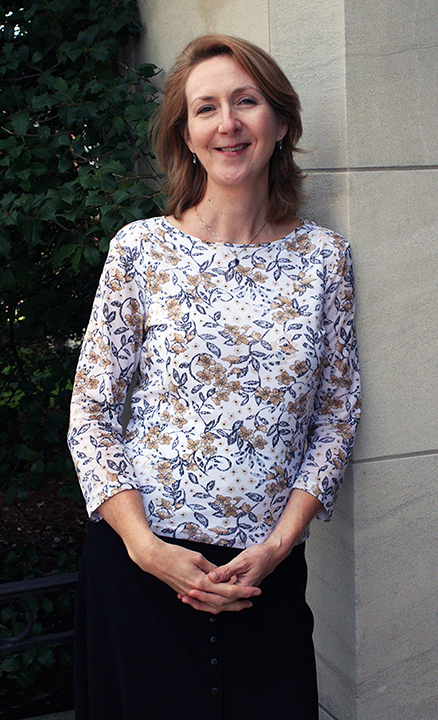 Penny Bender Fuchs never let a student pass through her introductory reporting and writing class without receiving an “F,” but it was her tough love approach that her students and coworkers admired.

Penny Bender Fuchs never let a student pass through her introductory reporting and writing class without receiving an “F,” but it was her tough love approach that her students and coworkers admired.

Penny Bender Fuchs knew everyone had the potential for greatness. It’s why she refused to settle for anything less, even from herself.

Fuchs, a journalism college professor and interim associate dean, died Friday after a seven-year-long battle with breast cancer. She was 50 years old.

Soon after her diagnosis in 2005, Fuchs became motivated to seize each day. She took up piano lessons and joined her church’s choir. Her husband, Michael, said she soon developed a disdain for the color pink, which reminded her of the disease that still could not stop her from accomplishing all she wanted to accomplish. Even through grueling chemotherapy, she would work Monday through Friday mornings, go through her treatment Friday afternoons, stay in bed through the weekend and start the cycle all over again Monday morning.

“She did not want to be known, nor did she view herself as, a patient of cancer or survivor,” Michael Fuchs said. “She pushed herself as hard as she pushed her students and her family, so she was an inspiration at home by doing as much as she could. She didn’t have to yell at us. We knew what we were expected to do.”

Fuchs worked as a Washington correspondent for Gannett News Service, covering the impeachment and trial of former President Bill Clinton in 1998 and 1999, former Vice President Al Gore’s fundraising role in the White House and Vice President Joe Biden’s time in the Senate. She also served as a reporter for the Daily Press and Daily News Record in Harrisonburg, Va.

That work experience came after Fuchs received her bachelor’s degree in mass communications from Virginia Commonwealth University in 1984.

She won several awards as a reporter before joining the journalism college in 1999 as a graduate student and part-time professor. She quickly rose through the ranks as a faculty member before becoming an associate dean, and was one of the most honored professors in the university’s history.

Seven of the journalism college’s most successful seniors, the Philip Merrill Presidential Scholars, named her their top faculty mentor between 2005 and 2012. She received the honors from four more students than any other teacher.

“It’s extraordinary,” colleague and journalism professor Ira Chinoy said of Fuchs’ awards. “She showed what could be done even when she was in a pretty dreadful situation.”

Though many tried, no student could pass through Fuchs’ reporting and writing class without receiving at least one “F”  — even the college’s top students. But it was the “F” papers she took extra time to mark up, so her students wouldn’t be discouraged, said Michael Fuchs.

“She loved reporting, but I think she loved teaching even more. She would spend long hours grading papers well into the evening, especially when she gave someone an ‘F’ for misspelling a proper noun,” Michael Fuchs said. “I would try to talk her out of it. I’d say, ‘This is terrific; you can’t possibly do that.’ And she’d say, ‘Don’t worry; he or she will learn from it.’”

And despite her “tough love” approach, she knew all of her students could be successful journalists, even those who didn’t actively seek out opportunities.

“I really remember her as the one person in the journalism school who really believed in me,” said Mark Davis, a 2004 graduate who now reports for the Valley News in New Hampshire and Vermont. “I don’t think most professors knew who I was. … She was the one person who went to bat for me, and I didn’t have to ask her to do it. She found this job for me.”

Although Fuchs completed the coursework for her doctoral degree, she gave it up after her diagnosis. But she never looked back, her husband said, because she realized her true passion laid in teaching. It also gave her more time to focus on being a mom — the job she loved most, her husband said — to her 17-year-old daughter and 14-year-old son.

Ever since her diagnosis seven years ago, Fuchs pursued reaching every day’s full potential, which has been an infectious attitude, her coworkers said.

“She was pretty much an open book. … From the time she was diagnosed with breast cancer in 2005, she treasured every single day,” said journalism professor Carl Stepp, who began working with Fuchs in 1999. “I remember one day we were walking back from the student union having lunch and she looked around and she said, ‘I’m lucky to even be here today.’ I think she made the most of every day, and I think that made people around her make the most of every day.”

Fuchs’ survivors include her husband and her two children, Kathryn and Jonathan.