Q&A: Maxwell wants WMUC to survive, metal and all 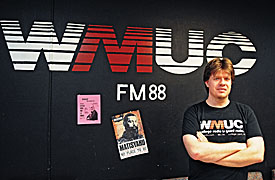 WMUC General Manager Scott Maxwell had only been on the job a few weeks when a rumor hit the Internet: The last vestige of student-run radio in the region was as good as dead.

The rumor was prompted by a filing with the Federal Communications Commission that indicated Baltimore’s WYPR-FM was poised to overtake the 88.1 signal emanating from College Park and was ready to blast the Washington area with Charm City-flavored public radio programming.

That never happened, but WMUC DJs and alumni veterans of the station have worried it would ever since WYPR announced it was seeking to increase its signal strength.

Maxwell spoke to The Diamondback yesterday about survival, extinction and the threats bland modern radio pose to us all.

DIAMONDBACK: How did you get started at WMUC, and how did you end up taking over as general manager this semester?

Scott Maxwell: I started at WMUC two years ago. I started in the spring of ’06. I had just come back to school full-time. I had been to the station before. I attended live shows here in the past. Friends of mine who had attended Maryland in the past had been DJs here. I came to the open house and said I wanted to do a heavy metal show. They gave me a shot. They ended up putting me on Thursday 2 to 4 in the morning – that’s what new DJs at WMUC tend to get – and I loved it. After that, when fall came around, I ran for general manager. I ended up being named operations manager … After that, this past year, I ran for general manager again, and this time I ended up being elected.

Maxwell: One of the things that makes us different, especially in, you know, the D.C.-Baltimore-Virginia area is that we’re one of the last true college radio stations left. And by true college radio station, I mean we’re broadcast over FM, we’re totally student-run, and we’re free-format. We don’t tell our DJs what to play. We give them a block of time and say “Hey, this is your time; do what you want, and show us what you got.” And there’s very few of those left in the country, period.

DBK: College radio has been around for a very long time in the United States, but a lot of stations have sort of been dying off. What it’s like being one of the last ones?

Maxwell: A lot of them have been sold off by their universities. Some of them sold them off and made them commercial interests. Some made them NPR affiliates. One of the reasons we’re still around – and I tell our staff – it’s because we’re [very] small. When people were looking for small, nonprofit stations to take over, we weren’t an appealing target. Now, that puts us in a very interesting position because we’re really one of the last true college stations in the area. We’ve survived all the pitfalls that have happened to other college stations along the way.

DBK: Recently, a local radio and TV blog, DCRTV.com, had a post saying that WMUC’s demise was imminent [because a Baltimore NPR affiliate may overtake WMUC’s signal by raising its own.] What did you hear from the university community about this, what did you hear from alumni, and what was your reaction?

Maxwell: I actually woke up to that. I woke up, and I checked my e-mail, and there were about five new e-mails there from alumni who had contacted me who saw this post. The reaction was “Is this finally happening?” We knew that WYPR had been threatening. That’s a funny word, but, you know, stating their intent to make [their] signal increase. We worried that it would wipe us off the air. Long story short, now it looks like it might not. But we’re still not entirely sure. We’re waiting for them to give us, you know, the sign that they’re done … The reaction was “Is this it for WMUC?” Blogs aren’t known for their reliability. Basically, the guy didn’t know what he was talking about. And no, there is no doomsday for WMUC. Yes, we will have our coverage affected. To what extent, we don’t know yet. What happened, a day after it was posted, it was taken off of DCRTV.

DBK: Let’s say a worst-case scenario does happen. What would your options be, technologically and legally, if WYPR did drown out your signal?

Maxwell: That’s what we don’t know yet. We’re looking into our options right now. Worst-case scenario, we’d be an online-only station. That’s the way that a lot of college stations have gone. We’re trying to avoid that, both because broadcast is our legacy and we want to preserve that, and [because] everyone and their mother can set up an online-only station. Having that FM signal is what legitimizes us as a radio station.

DBK: Among some students, there’s the perception that WMUC broadcasts obscure music that’s played by non-professional DJs. Do you think that’s true at all? What’s your programming philosophy in general?

Maxwell: First of all, I think that one of the important things about our station is that it’s educational. We’re a student organization; our license is owned by the university. We need to keep with the university’s mission, which is obviously education. And as a station, in so many ways, we try to educate and inform. First, our DJs are students. They’re here not because they have professional DJ experience, but because they’re trying to get professional DJ experience. We have a recording studio. People can come in here with no experience recording, and they can learn how. As for obscure music, that’s right in line with the educational mission as well. We try to play music that you can’t hear – that you, by and large, won’t hear on commercial radio. If you want to hear what DC101 is playing, listen to DC101. If you want to hear what 94.7 is playing, then listen to them. If you want to hear something else entirely, then listen to WMUC, ’cause we’re going to give you something different.

Maxwell: I think that in recent years, people have begun to realize the importance of what it is that we now do. As far as vulnerability, we’ve never had the goal of being a commercially viable station – because we’re non-commercial, we’re a nonprofit. What we’re trying to do, basically our mission is to exist and to broadcast. … Especially because of media consolidation, you can listen to radio stations in different cities that are all playing the same playlists over and over and over because they’re all owned by the same conglomerates. I think people are starting to turn to stations like us for something different, for something that they didn’t hear on bland modern radio. Over the last past decade or so, there’s been this new appreciation for the culture of college radio, sort of an anything-goes kind of atmosphere. While we are trying to fulfill our educational mission, we do want to remain free-form because that’s an important part of our mission.

DBK: Your DJs are not paid. Why do they want to work here? What do they gain?

Maxwell: They come here for all sorts of reasons. We’ve got people who seriously want to get into radio or TV broadcasting, and a lot of them do. You see a lot of journalism students, especially with our sports department. A lot of those guys are seriously looking into sportscasting, and a lot of them have gone on to success after college here. Some of them just love music and just love to be around a place where they can discuss obscure music with like-minded folks. A lot of them are also looking into getting into the business side of the music industry. A lot of them have their own bands or want to get into promotions, start their own record labels – recording is a big thing that we do. And some of them are just looking for a social group, and we welcome those folks as well. We try to keep this a fun place as well as a productive radio station. People have all sorts of different motivations in coming here.