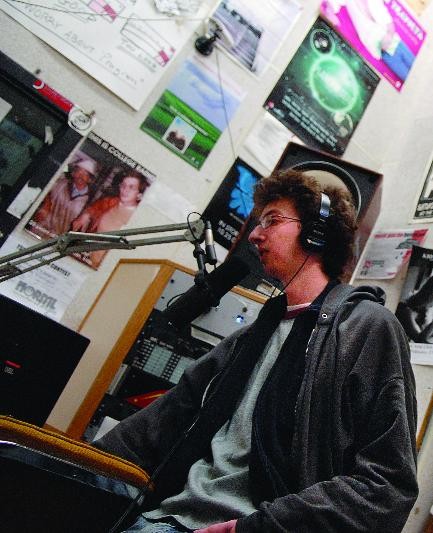 Senior Anton Kropp of WMUC says he isn't worried about WYPR's threat to take over their frequency.

Senior Anton Kropp of WMUC says he isn’t worried about WYPR’s threat to take over their frequency.

University officials agreed yesterday that Baltimore station WYPR 88.1FM is within its legal rights to overtake the university’s student station WMUC 88.1FM, but said they were previously unaware of WYPR’s intentions to expand its signal to this area by the end of this year.

University attorney Anne Bowden said because WMUC has a low-wattage student license, the station’s signal is not legally protected by the Federal Communications Commission in the same manner as a high-wattage station would be. But Bowden said it was her understanding the Washington area’s FM dial was so congested, no stations would be able to expand.

“We talked with professionals in the broadcast industry and communication lawyers, and it was their unofficial opinion that while we were not covered by FCC law, the fact that we had not been interfered with in the past suggested we would be okay,” Gnadt said. “If someone did increase their signal strength they would probably be met with protest.”

WYPR Program Director Andy Bienstock said his station was granted a construction permit in 2001 by the FCC to increase its signal strength but held off on the power-up to try to work with WMUC, which he said was unsuccessful.

“It’s unfortunate for WMUC,” Bienstock said. “I understand their frustration, but the university had to have known about it. These aren’t secrets.”

Concerns of WMUC’s fate exploded Tuesday when an article in The (Baltimore) Sun said WYPR intended on “pushing aside” WMUC to make room for their increased signal. WMUC officials said they were “blindsided” by the claim.

Bienstock said WYPR managers notified University System of Maryland Chancellor Brit Kirwan of their intentions, offering to help WMUC find an alternate frequency or employ students at WYPR. Bienstock said the station attempted to contact the university for six months, but the university did not return calls or express interest in working with WYPR.

Kirwan did not return several messages left by The Diamondback last night.

Gnadt, who also serves as associate director of Stamp Student Union, said Bienstock’s claims were “completely false,” claiming he was in verbal and written communication with WYPR’s president and general manager, Anthony Brandon, in November 2002.

Gnadt said he received a letter from Brandon expressing interest in altering WMUC’s license to increase WYPR’s signal. Gnadt and WMUC’s executive board said they would consider the decision. After discussion and a meeting involving Vice President for Student Affairs Linda Clement and Philip Merrill College of Journalism Dean Thomas Kunkel in June 2003, Gnadt said he contacted Brandon, “indicating that we were not interested in considering their proposal any further.”

Gnadt provided The Diamondback with letters between himself and Brandon, the final piece of which Gnadt sent Aug. 1, 2003. Gnadt said his letter was the “last I heard about it, until the [Sun] article.”

Bienstock said the increase of WYPR’s signal strength was “not imminent” but said the station planned to make the jump by the end of the year. WYPR’s FCC construction permit expires in 2008, he said.

It is unclear how WMUC will be affected by the power, if at all.

“Honestly, we won’t really know how it’s going to work out until we throw the switch,” Bienstock said.

Gnadt said the interference from WYPR may mean WMUC can only be heard as far as the Denton Community on North Campus, rather than farther up Route 1.

Gnadt said he and WMUC officials will collect information, including consulting a broadcast engineer on the issue in the coming weeks on how WMUC might be affected, and create a plan of action.

Regardless of the specifics, Gnadt said he believed it was important to keep WMUC running.

“WMUC offers such a great opportunity for students,” he said.