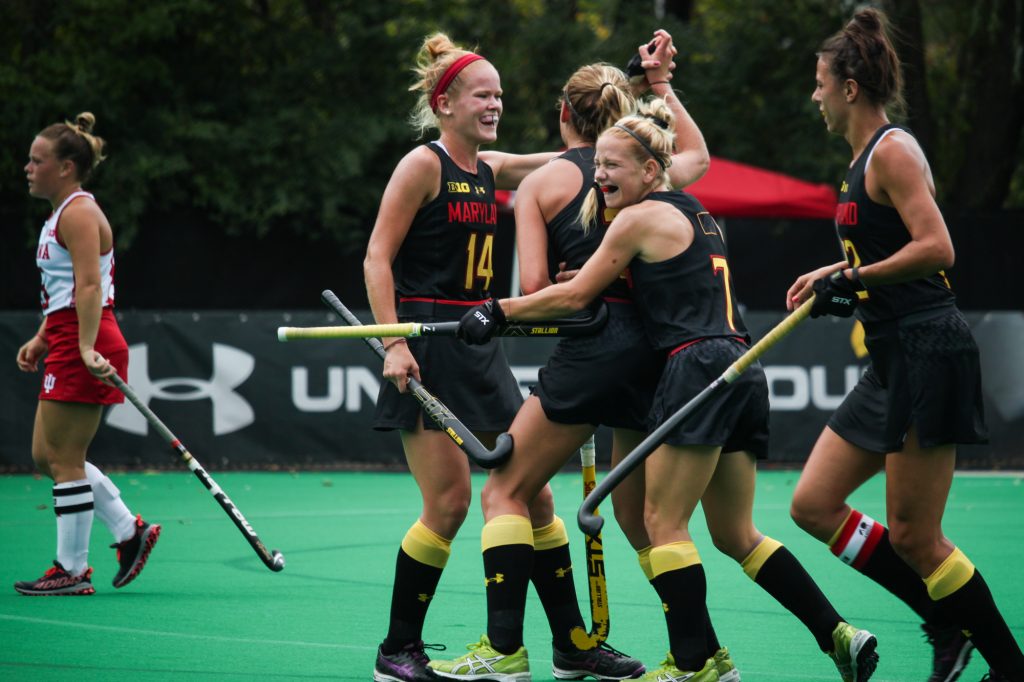 The team celebrates midfielder Olivia Reiter's goal before halftime in Maryland's 1-0 lead over Indiana at the Field Hockey & Lacrosse Complex on September 17, 2016. (Reid Poluhovich / The Diamondback)

In the Maryland field hockey team’s match against Indiana on Saturday afternoon, the Terps experienced some frustration.

At one point in the second half, forward Welma Luus jumped up and down after a foul prevented her from taking a shot at point-blank range.

Yet despite the few slips, coach Missy Meharg’s squad didn’t succumb to the Hoosiers, capturing a 4-1 win at the Field Hockey and Lacrosse Complex in its first Big Ten game of the season.

“We weren’t framing the goal cage well,” coach Missy Meharg said. “We didn’t have people on the help side.”

Though the Terps controlled possession for the majority of the first half, the offense couldn’t capitalize on many of its looks, out-shooting Indiana, 10-3, in the period. They struggled to connect in the circle, and the Hoosiers goalkeeper Noëlle Rother finished with eight saves.

Defender Courtney Deena, though, sparked the Terps’ momentum when she controlled possession deep in Maryland’s territory. Deena appeared to try to pass the ball forward and missed, but her backswing made the whiff into a fake, and she used the space to start a string of passes.

Midfielder Olivia Reiter was on the receiving end of the move and charged toward Rother. Reiter looked to take a shot, but didn’t make initial contact.

Midfielder Lein Holsboer said Reiter’s move was intentional. The team had practiced faking shots to beat Rother, who tends to come off her line. Instead, Reiter composed herself for her second look, which Rother saved. On her third effort, Reiter pushed the rebound in.

“It was perfect,” Holsboer said. “She faked it and got around [Rother.]”

It wasn’t the Terps’ first shot at an empty net. About a minute before Reiter’s score, Maryland earned its first corner of the game. Luus had a clear shot with Rother out of position, but she pulled it wide.

For Luus, it was the first of a few missed opportunities. She hit the post twice and couldn’t capitalize on a look at the start of the second half.

“At halftime, Missy was talking about how we had so many balls go right across the cage,” goalkeeper Sarah Holliday said.

In the 38th minute, though, Luus made a connection, taking a pass at the edge of the circle and backhanding the shot past a charging Rother.

After the Terps extended the lead to 2-0, the Hoosiers seemed to come alive. They earned a string of corners, one of which led to their first goal of the day.

“When [they] come back and [make] it a one-goal difference again, that adds some extra stressors that I thought we handled quite well,” Meharg said.

The Terps responded with two goals to close the game. In the 60th minute, defender Grace Balsdon scored her sixth goal of the year, and midfielder Lein Holsboer scored two minutes later to secure the team’s fifth straight win.