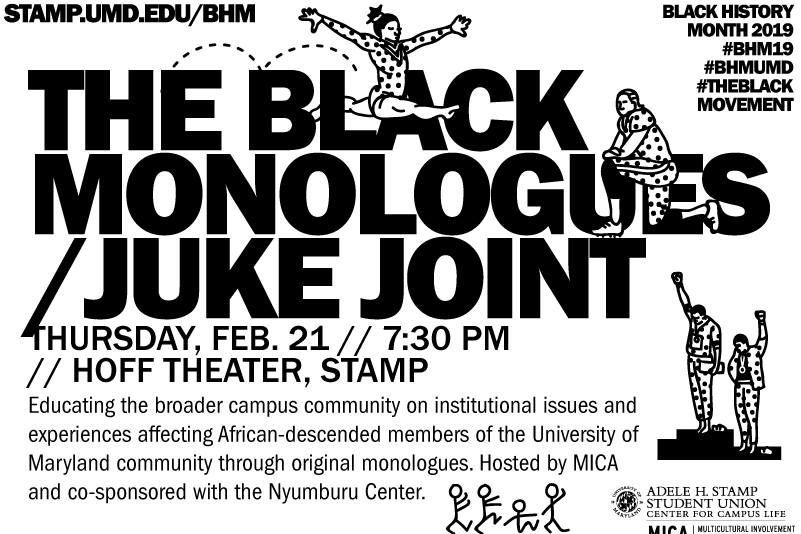 On Thursday night, the University of Maryland’s Office of Multicultural Involvement & Community Advocacy hosted the Black Monologues, a series of performances co-sponsored by the Nyumburu Cultural Center. Students’ original performances described some of the institutional issues affecting African-descended members of the university community.

“The Black Monologues happens every year and brings us together as a community to showcase our arts, and it’s really nice to see people’s talents, regardless of their majors,” said Trey Huff, a senior in his fifth year. The biochemistry major, who is a student ambassador for Nyumburu, hosted the event.

Huff made sure everyone felt comfortable throughout the event, playing hype music, dancing around and encouraging anyone to come up the stage and showcase any type of art. They also had a full DJ setup, and everyone seemed like they were having a good time. There was such a strong community feel.

Monique Wingo, a senior communication and journalism major, focused on the word “minority.” She spoke about how language shapes culture and people’s perceptions.

“The words of language are the roots of how we think and spread ideas amongst ourselves. That’s why we are called the word ‘minority,’” Wingo said. “Subordinate, smaller, lesser, marginal, insignificant, secondary, minimal, lower, with the root of the word itself being minor.”

Another student performed a chilling spoken word poem with such strong rhythm it was almost a song. Myles Gomez, a freshman finance major, titled his poem “Struggled,” which focused on institutional racism. He talked about a common fear African-American families have: that their son or daughter won’t come home at night.

The poem enraptured the audience. Gomez’s most powerful line was: “We learn to walk, talk and act just right, but none of it matters because we can never be white.”

The performances weren’t all just about race issues. One of the most moving performances was actually an original ballad written and performed by Huff. His voice was so smooth and beautiful — and the song made me tear up. The a cappella ballad was about his grandfather who passed away in 2015. Everyone in the crowd was snapping along with Huff, and the tune was stuck in my head for a while after the event.

“But that was then, sitting on the couch in the busy house, on memory lane, watching the sunshine when you were all mine, without you, it wouldn’t be the same,” Huff sang.

It was refreshing to go to an event that inspired action, and it was very enjoyable as an audience member. It’s important to support diverse communities on campus — even if you aren’t a part of the community yourself.