‘It is not hopeless’: UMD panel tackles global refugee crisis 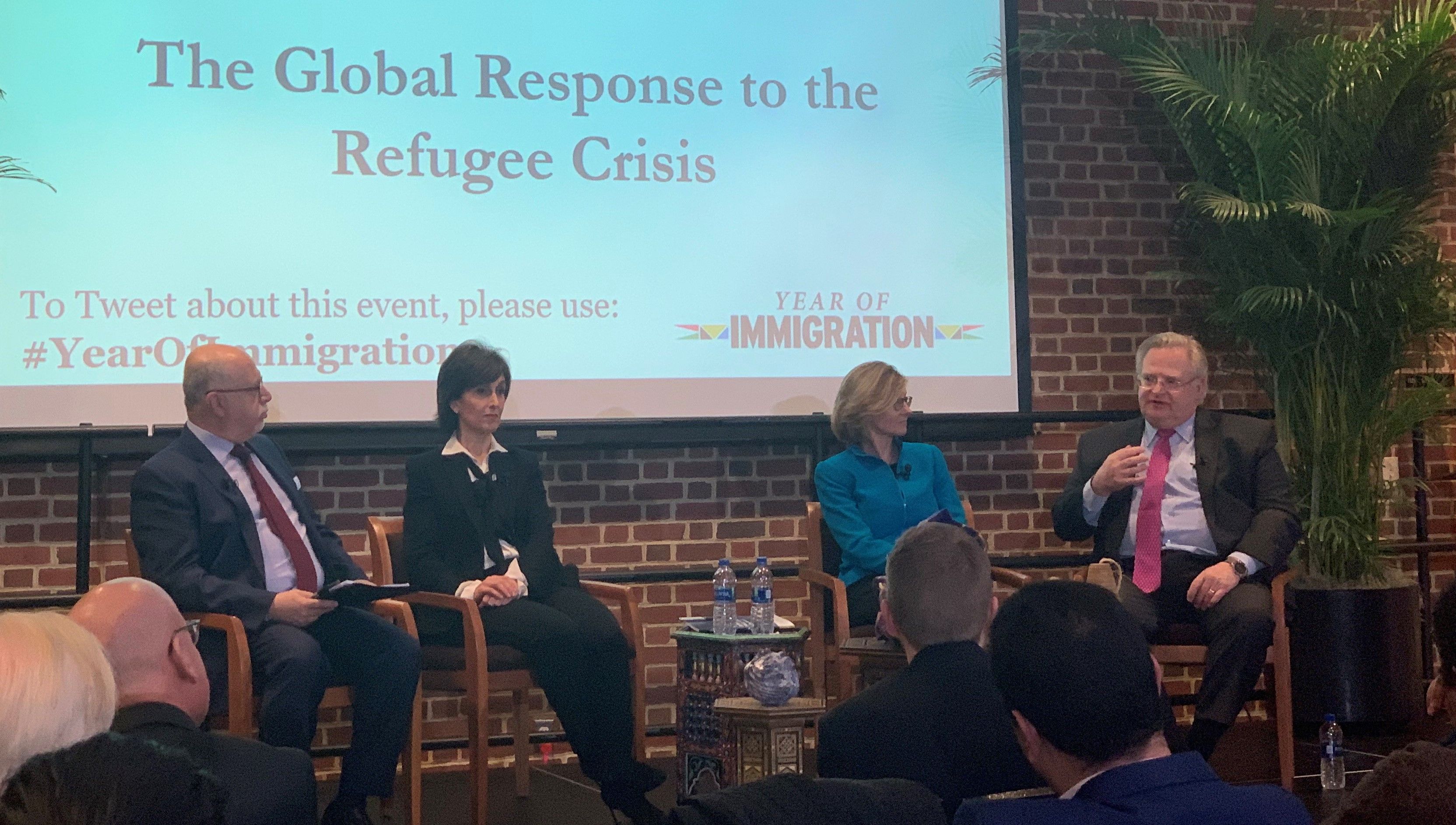 The Sadat Chair for Peace hosted the "The Global Response to the Refugee Crisis” panel, to discuss the refugee displacement on Mar. 3, 2019. (Photo by Ryan Wu/For The Diamondback)

Several international affairs experts discussed causes and solutions to the growing global refugee crisis at a University of Maryland panel on Thursday.

“The response challenge [to the refugee crisis] is a formidable one,” said Eric Schwartz, president of Refugees International, an independent humanitarian aid organization. “As difficult as this situation is, it is not hopeless.”

Schwartz, who also served as Assistant Secretary of State for Population, Refugees and Migration during the Obama administration, was one of the panelists at “The Global Response to the Refugee Crisis” panel, hosted by the Anwar Sadat Chair for Peace and Development within this university’s behavioral and social sciences college on Thursday.

University President Wallace Loh delivered the forum’s opening speech and welcomed both the moderator, Shibley Telhami, Anwar Sadat Professor of Peace and Development, as well as other attending experts in Stamp Student Union.

With the campuswide celebration of the Year of Immigration, Loh said, this year is critical to raising awareness about the refugee crisis.

“I’ve never seen a situation where this country and other liberal democracies have responded with such nativism, isolationism and populism to this incredible human crisis,” he said. “The issue here is nothing less than the heart and soul of our democracy, of the values that we stand for.”

There are about 70 million refugees in the world today, the largest number recorded since the end of World War II, Schwartz said.

The three common solutions to a refugee crisis are returning refugees to their home countries once the cause of their fleeing has been addressed; providing permanent citizenship in the countries that they have fled to; or repatriation — permanent settlement in a third country like the United States — Schwartz said.

“Those three solutions have not been adequate,” Schwartz said, adding that there are studies going on across the world to strengthen those solutions and devise new ones.

Twenty years ago, four out of every five refugees were displaced due to natural disasters like floods and droughts.

Now, violence has become the predominant reason for refugee displacement, in part due to years-long civil wars and famines in countries like Syria, Afghanistan and South Sudan, according to panelist Nancy Lindborg, president of the United States Institute of Peace, an independent national security organization.

“If you look at the top 15 sources of refugees, these are all the same countries that are at the top of the list for state fragility,” Lindborg said. “Countries that are not responsive to the needs of their people. … There’s a broken contract between the state and people.”

Jordan, one of many countries that has seen an influx of Syrian refugees since the Syrian civil war broke out in 2011, has struggled to accommodate the people fleeing across its borders, said Dina Kawar, Jordan’s ambassador to the United States.

The Jordanian government has provided around 100,000 working permits for Syrian refugees and is committed to providing education services, too, Kawar said. Kawar added that it’s necessary for Jordan to help the refugees improve not only their living conditions but their overall well-beings too.

“You don’t want to bring a whole generation of uneducated refugees back to their countries,” she said.

Daniela Saez, a senior government and politics major, said she had a classmate in high school whose family was granted asylum in the U.S., which made her more accepting of refugees in general.

Junior government and politics major Taiwo Mustafa, a Nigerian immigrant, said he was concerned by the sheer size of the Syrian refugee crisis and the burden it puts on neighboring countries. As of 2016, more than half of Syria’s pre-war population is in need of humanitarian aid, according to the United Nations.

“They are [humans first], and they deserve protection and asylum,” Mustafa said.