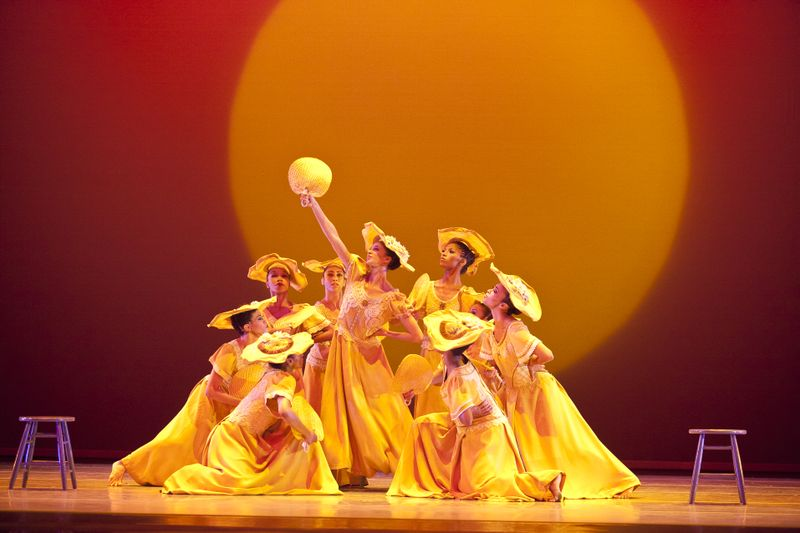 In the Bible, the story of Lazarus is in the Gospel of John. A follower of Jesus’, Lazarus falls ill, and his sisters seek Jesus to request his help. By the time Jesus arrives, Lazarus has been dead for four days. Ultimately, Jesus pulls off a miracle and resurrects Lazarus from the dead.

This tale was the theme opening act’s theme at the 60th anniversary performance of the Alvin Ailey Dance Theater. The troupe graced the John F. Kennedy Center for the Performing Arts’ stage with a clear display of finesse and passion, continuing to cement a decades-long legacy.

“Lazarus,” is act one of the company’s first two-act ballet, choreographed by Rennie Harris. One of the smaller dancers represents Lazarus. He gets up and falls down, gets up and falls down, but never quite reaches the ground. He collapses into the arms of someone much larger than he is and is supported by a village of people who move with such oneness you’d think you were watching clones.

There is despair and trauma. Hope seems lost. There is a rare moment of uptempo as the dancers Dougie, shuffle and twirl across the stage to Michael Kiwanuka’s “Black Man in a White World.”

There is a lot of emphasis on footwork, which is so hypnotic that you almost forget the gravity of their motion. It’s rapid and seems as if it wants to be joyous, but the song instead makes the routine seem more representative of the anxiety and panic many black Americans experience.

The theater had humble beginnings, touring the country on what the dancers called “station wagon tours,” in reference to their mode of transportation.

Just four years later, President John F. Kennedy commissioned the troupe for an international tour to Australia and Asia as part of his “Special International Program for Cultural Presentations.”

In the decades that would follow, the Ailey Theater became one of the most sought after dance companies in the world, touring multiple other continents and performing at The White House. It collaborated with and housed legendary artists such as Duke Ellington and Judith Jones. CBS and PBC even gave the theater television specials.

The second act, “Revelations,” follows the book of John within the production. In it, Earth is plagued with rivers of bloods and swarms of locusts, and only those who kept their Christian faith are allowed to see heaven. The contentment and glee often associated with an ascension to heaven is brought to life with vivid whites, yellows and blues and a lively melding of gospel, jazz and hip hop.

The act is, deservedly, one of Ailey’s earlier and most recognized works. Ailey, who died in 1989, said his days in church in his home state of Texas inspired the routine.

“Sometimes, once we express that someone is an icon, that kind of takes the humanity out of the fact that this person probably had fears, probably had things that they had to overcome to be able to have the grace that Alvin Ailey did,” artistic director Robert Battle said.

The final scene of the show is an exuberant rendition of the old Negro spiritual, “Rock a My Soul in the Bosom of Abraham.” The bosom of Abraham being symbolic of rest in the Bible, and in this case, comfort knowing that all that Ailey built — a dance theater, a school for dance, a foundation, among other things — has pressed on even in his death.