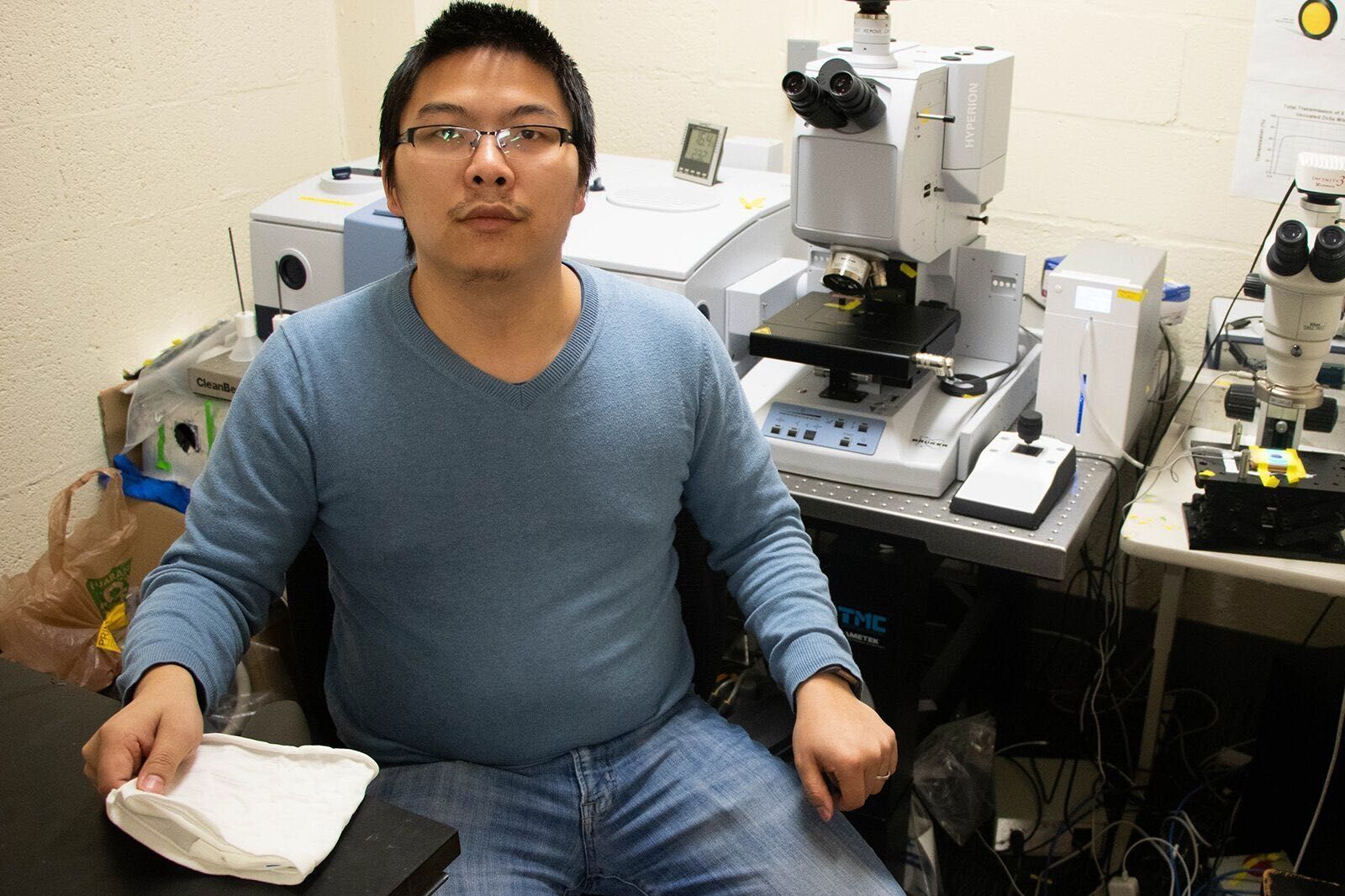 Zhiwei Peng is part of a UMD research team that created a fabric that adapts to body temperature. (Julia Nikhinson/The Diamondback)

Thanks to a group of researchers at the University of Maryland, you might not have to worry about putting on and taking off layers to keep up with temperature fluctuations in the future.

Five years ago, 11 researchers from the chemistry and biochemistry and physics departments, as well as the Center for Nanophysics and Advanced Materials, began to design a fabric that adapts to changes in temperature. In February, they published their research in Science — and now, they’re planning to produce the cloth for sale.

“Most fabric now only has one function: to keep you warm. It doesn’t care about how you feel,” chemistry professor and co-author YuHuang Wang said. “The only way you can do that is, if you feel too hot, you take it off. If you feel cold, you put it on.”

Currently, the researchers have only a prototype of the fabric’s future commercial product, which is soft and looks similar to a dishrag.

The developed cloth is made from yarn fibers that shrink when they’re hot or wet — when the wearer is sweating, for instance — to open gaps in the cloth for ventilation. Likewise, when the yarn fibers are dry, they expand, closing these gaps and insulating the wearer.

“Our fabric has a switch automatically tailored to your own response,” Wang said. “It can open, it can close, allowing the heat to come out or stay in.”

The authors filed a patent for the cloth and have spoken with the university’s Office of Technology Commercialization about selling the fabric to the general public.

The team plans to start out by marketing the fabric to university and professional athletic teams, as they would be most likely to have the budget to purchase the product, Wang said. But he hopes it will eventually be affordable to the average consumer.

Infants and the elderly could especially benefit from the fabric’s capabilities, Wang said, as they have problems regulating their own body temperatures. He added that it could also be helpful for military personnel and outdoorsmen, who often aren’t able to bring along extra clothes to keep up with temperature fluctuations.

But Wang said he thinks everybody — including university staff and students — could benefit from the cloth.

Sophomore information science major Edelawit Sebesibe said it would be nice not to worry about how uncertainty in temperature will impact her day.

“Especially with Maryland weather, I never know if I’m going to be hot or cold, and then once I’m inside the buildings, [it’s] the same [thing],” she said.

Because it is still a prototype, the scientists are unable to estimate how much the cloth will cost commercially, but they say that getting the price to be competitive with other apparel companies is crucial to the product’s success.

“The main issue is that we are getting to a very big and traditional market. There are a lot of big companies there,” said assistant research professor and co-author Zhiwei Peng. “We are trying to compete with them.”

Regardless, the scientists are optimistic that the price will go down once they move past the prototype phase and start producing the cloth for the mass market.

“The scale is really small, but if we can scale up, the cost can be very competitive,” Wang said. “Even compared to a performance fabric by Under Armour.”