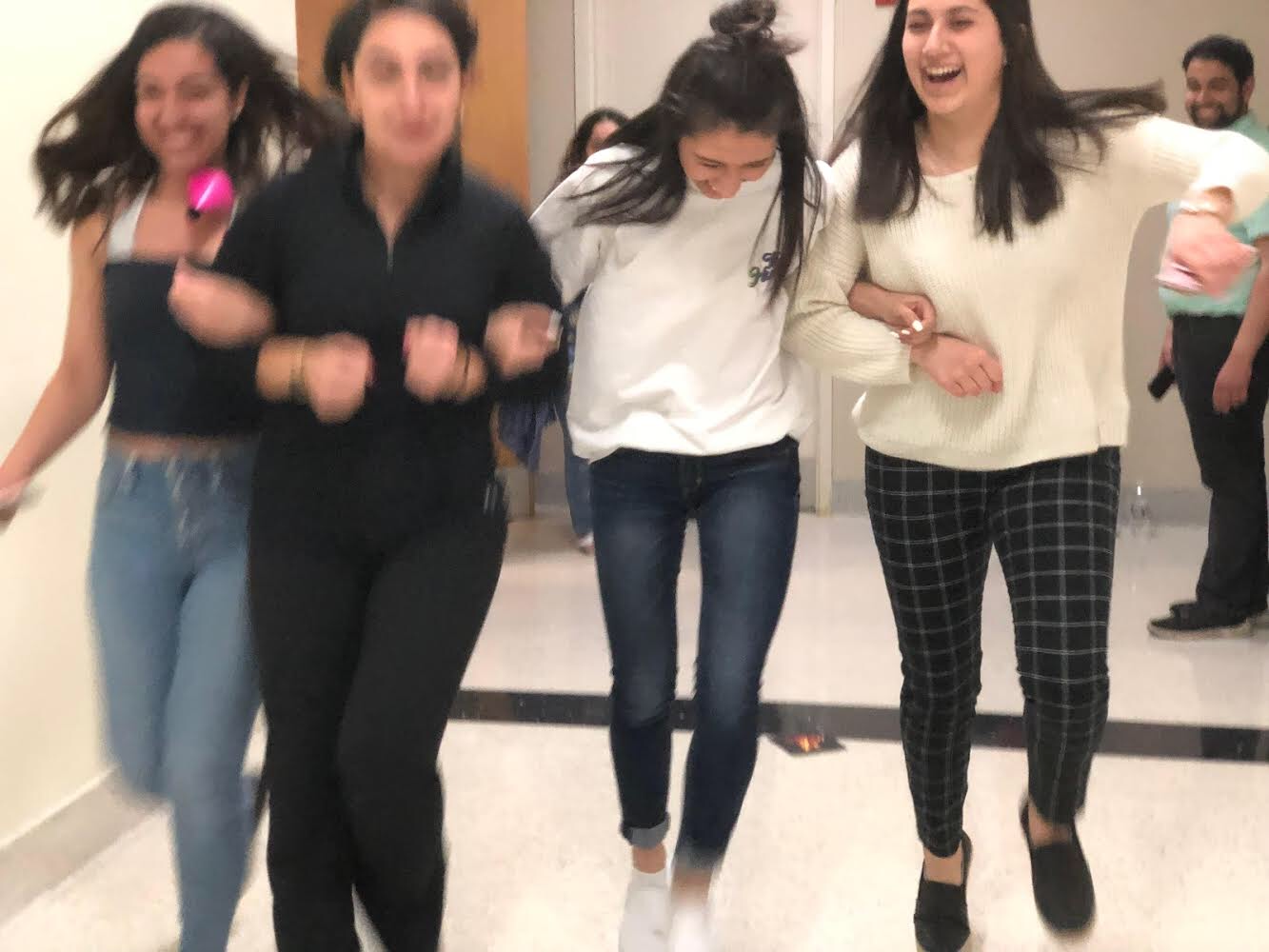 Laudan Nikoobakht, second from left, and three other friends jump over pictures of Chahar Shanbe Souri fire in the hallway at Stamp Student Union at the University of Maryland on Thursday, March 14, 2019 (Photo by Fatemeh Paryavi/For the Diamondback)

The four girls giggled to each other as they linked arms and jumped over a small photo of a fire, lying in the middle of the hallway.

The act, known as Chaharshanbe Soori, is meant to ring in Nowruz, the Iranian new year. It has been celebrated for thousands of years in the Middle Eastern country and aligns with the spring equinox, on March 20 this year.

The Iranian Students’ Foundation at the University of Maryland had originally planned to hold the event outside on Mar. 8 by jumping over a real fire in Hornbake Plaza, but had to cancel due to bad weather.

Instead, students like sophomore criminology and criminal justice major Avva Sarkarzadeh celebrated the new year with her friends at Stamp Student Union on Thursday by eating pies and cookies and jumping over pictures of fire in the hallway in front of the Jimenez room.

“It’s really fun … just being with my family around that time,” she said. “I love the traditions and I always can look back on my pictures with all my family and … just see how we all grow and change.”

Chaharshanbe Soori is tied to one of the oldest religions on Earth, Zoroastrianism, which Sarkarzadeh practices. Fire-jumping represents leaving negativity behind in the previous year.

“Jumping over the fire not only provides warmth — meaning winter is ending and warmth and light is coming — but is also something that must be kept pure,” said Kamyar Dastani, president of the Iranian Students’ Foundation on campus. “The symbolism of fire is that it burns off the bad, and provides purification as Iranians head into the new year.”

Sarkarzadeh said she usually attends traditional dinners with her family during the 13-day celebration. They eat a salmon and rice dish called sabzi polo mahi, which represents life and rebirth.

Hirmand Saleh, a freshman physiology and neurobiology major, celebrated his birthday at the event. Saleh sees the event as a chance to forget the negativity of the previous twelve months.

“It’s a fresh start for the new year,” he said.