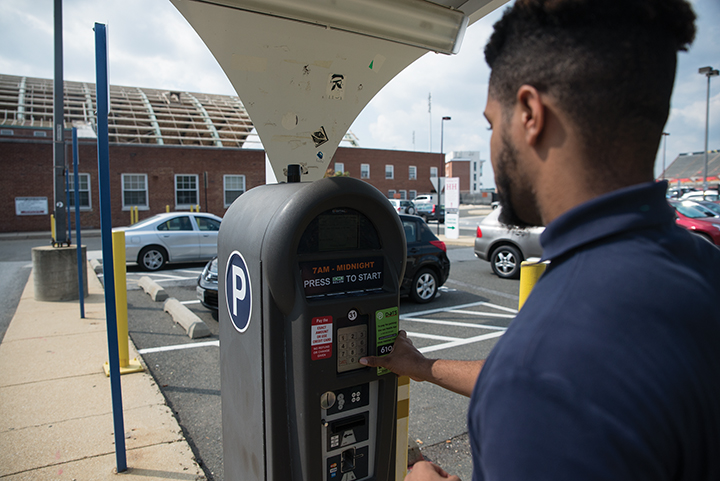 Mario Johnson, a senior in Family Science, uses a parking meter on campus.

University of Maryland residents may be able to park their cars in a lot off of the campus beginning next year, DOTS Director David Allen said.

Because of various construction projects, freshmen and sophomores will not be able to park on the campus beginning next fall, according to a previous Diamondback article. The construction will reduce the number of parking spots on campus by more than 2,000.

To offset this loss in parking spaces, this university’s Residence Hall Association has worked with the Department of Transportation Services to assess various solutions — including a park-and-ride lot in South Laurel about 13 miles away, said Matthew O’Brien, RHA Transportation Advisory Committee chairman.

The RHA is in the process of contacting the lot’s owners to assess its availability, particularly for overnight parking, Allen said. The lot features about 600 spaces and is “very under-utilized,” he added.

“I don’t know what the owner may require, or if they even allow the 24 hours,” he said. “Generally park-and-ride lots do not allow overnight parking.”

DOTS would likely provide a shuttle to and from the lot, Allen said.

O’Brien, a freshman enrolled in letters and sciences, said closer lots were not adequate for student parking.

However, because some students have concerns about security in the Laurel lot, the group is looking into hiring security personnel, O’Brien said.

The fee charged to students parking in this lot would likely be lower than what students pay to park on the campus now, O’Brien added.

“If that parking permit is more than what a parking permit here is currently, it probably wouldn’t be the best idea to do that, because it’s less convenient,” he said.

Resident students are currently required to pay $514 per year to park on the campus, according to the DOTS website. Parking permits are guaranteed to students who are juniors or seniors, and they are offered to freshmen and sophomores only if space is available.

RHA President Steve Chen said discussion during RHA’s senate meeting Tuesday showed that many students have a positive reaction toward the proposal.