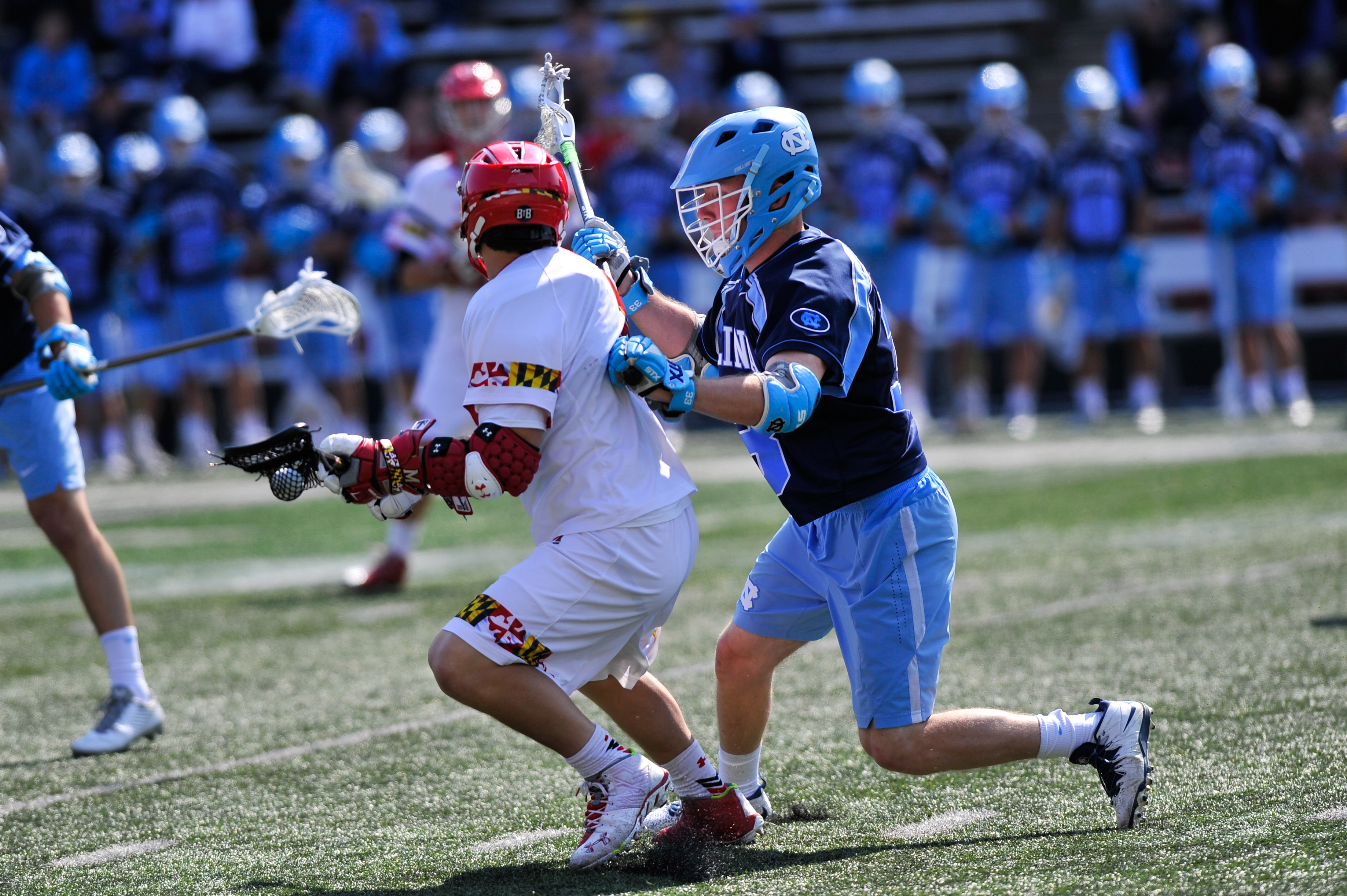 Attackman Matt Rambo looks to go to the goal when the Terps beat North Carolina, 11-8, at Maryland Stadium on March 26, 2016. (Daniel Jenkins/The Diamondback)

The Terrapins men’s lacrosse team’s ninth game will have a different vibe from the first eight, coach John Tillman said.

His squad’s Big Ten slate starts Saturday at Michigan. There’s a trophy on the line.

Regardless of the outcome against the Wolverines, the Terps know they won’t hoist any hardware after the contest. But with conference records determining the Big Ten regular-season champion, Tillman “knows what’s at stake” as the Terps enter their second season in their new conference.

Last year, they split the regular-season title with Johns Hopkins before losing their first game of the Big Ten Tournament. The Terps know surprises can happen with each opponent gunning for the top spot, so they’ve relied on the veteran players to set a workmanlike example entering the bout.

“Conference games are just always tough,” Tillman said. “Any time you have a conference game, it takes a little bit more meaning. You’re always competitive, and you want to win.”

The Terps were no stranger to tight battles in their first year as members of the Big Ten. In a span of 10 days last April, they won three straight games by one goal each, the latter two coming against conference foes.

The Wolverines were also the Terps’ first conference game in 2015, a 13-4 victory in College Park. While the Terps have only played in Ann Arbor once, winning 13-5 in 2014, they’ve become accustomed to playing on the road.

Five of their first eight outings have come away from Maryland Stadium, and Tillman said this week that their hectic schedule could have been a distraction.

But his upperclassmen haven’t allowed the team’s concentration to waver, despite dropping their first two away games to start the season.

They don’t goof around in practice or walkthroughs. They study the details of the game plan, often quizzing the younger players on the scouting report. They’re vocal on the field and the sidelines.

“It’s really easy to lose your focus, and I get it; they’re 18- to 22-year-olds, and I was certainly no different,” Tillman said. “So you’re really leaning on those guys [to say], ‘Hey, we want you guys to have fun. We want you to enjoy the moment. But this is a business trip, per se, and we have to make sure we’re up here for a reason.'”

The Terps didn’t lose sight of that during their triumph in Philadelphia on Tuesday.

Penn jumped out to a two-goal lead less than two minutes after the opening whistle. The second score in that burst came when Quakers midfielder Austin Kreinz scooped the faceoff and beat the Terps in transition.

Despite Penn winning the game’s first four faceoffs, attackman Matt Rambo soon responded with two scores in a five-minute span with a tally from midfielder Pat Young sandwiched between. Of the Terps’ six first-quarter goals, five came off the stick of a junior or senior.

“We just brought it up and said, ‘We need more energy. We need to just start playing like Terps,'” Rambo said of the veterans’ message. “We responded well.”

Tillman had a similar message during a second-half timeout.

The Terps scored the only point of the third quarter, and the coach sensed his team was struggling against Penn goalkeeper Reed Junkin, who entered the game atop the national standings with an average of 13.57 saves per game.

“‘Both teams are flat. Who’s going to take it?'” goalie Kyle Bernlohr remembered Tillman asking the Terps in the second half. “We really carried that and took it forward.”

The Terps hope to display the same diligence in Ann Arbor. The teams don’t yet have a storied rivalry — Michigan’s program started in 2012 — like the Terps did in the ACC, but one thing won’t be different as the veterans lead the Terps into the second phase of their season.

There’s a trophy to start working toward.

“It’s not so much what’s different; it’s what’s the same,” Tillman said. “All those [conference] games are really tough.” 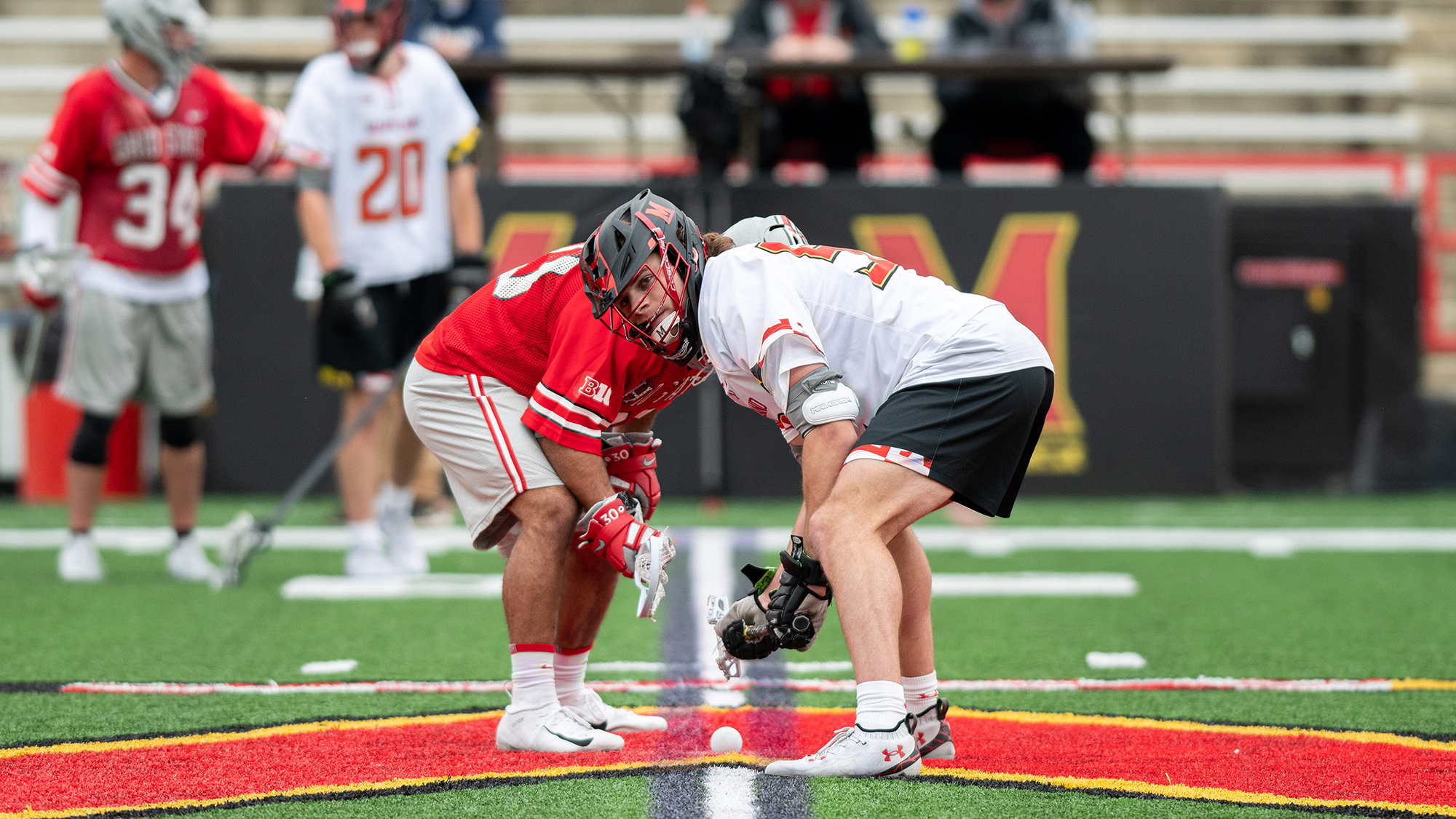