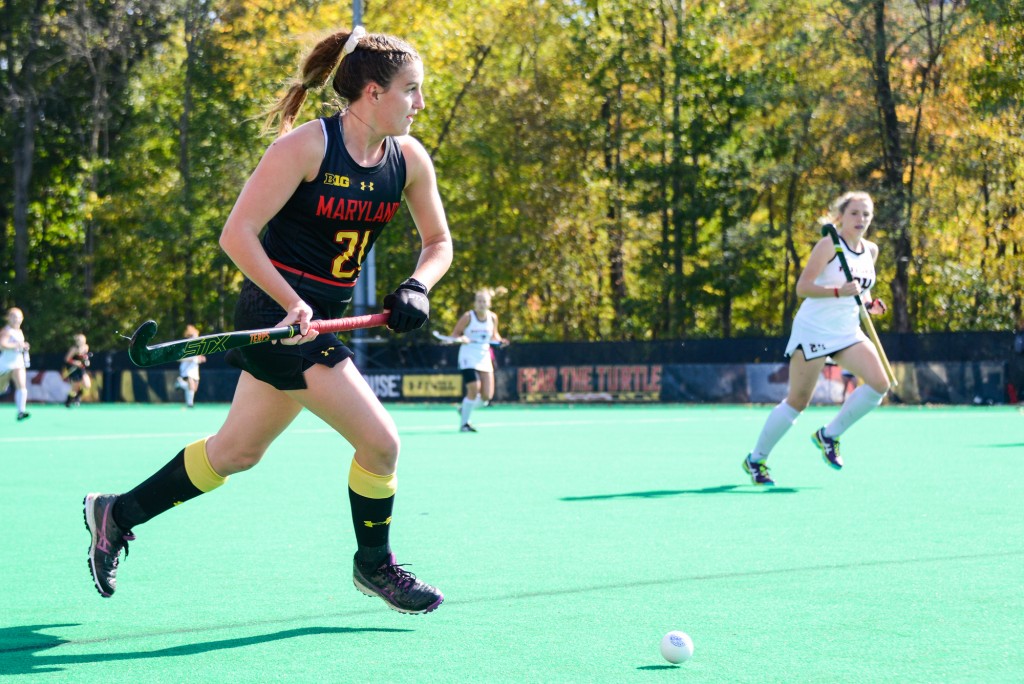 Minutes after helping goalkeeper Sarah Holliday defend a Rutgers penalty corner attempt, Madison Maguire clenched her right fist in the air and jumped in celebration. The Maryland field hockey midfielder deposited the ball into the lower-left corner of the net to give the Terps a 3-0 lead late in the first half of their 6-0 rout of No. 21 Rutgers on Sunday.

In the 47th minute, Maguire found herself open and scored her second. In the 48th, she earned a hat trick. The celebration was much less extravagant. It appeared as if an offensive outburst was expected.

There is something about the last portion of a season that resonates well with Missy Meharg-coached teams. The Terps carried an eight game winning streak into the Big Ten Tournament last season.

Since losing to then-No. 6 Michigan on a last second score on Sept. 29, the Terps offense has found its stride. The backline has shut down opposing attacking units. The Scarlet Knights offense was its most recent victim.

Seven minutes into the game, defender Melissa Wilken emerged as Maryland’s most recent offensive threat. She deposited the ball into the lower-left corner of the net to give the Terps an early one-goal lead.

Wilken entered play Sunday with two goals in 14 games. She matched that total with about 10 minutes remaining in the first, when midfielder Brooke DeBerdine’s speed helped the Terps advance the ball into their offensive zone. The ball reached Wilken, who scored again.

Maryland carried a three-goal lead and 9-4 shooting advantage into the intermission but remained aggressive in the second half. Wilken earned a hat trick — Maryland’s first this season — with her score eight minutes into the second half.

Still, the Scarlet Knights had opportunities to score. While Maryland secured three penalty corner attempts, Rutgers earned five. However, the Terps put the game out of reach early and didn’t look back.

Throughout their winning streak, the Terps have been adamant little has changed. Shots are finding the net, and their aggressive press defensive style has exposed the weaknesses of opposing attacks.

But Sunday, the Terps played like the top-10 team opposing coaches felt they were in August. It was the defense’s third shutout and the second time Maryland scored at least six goals.