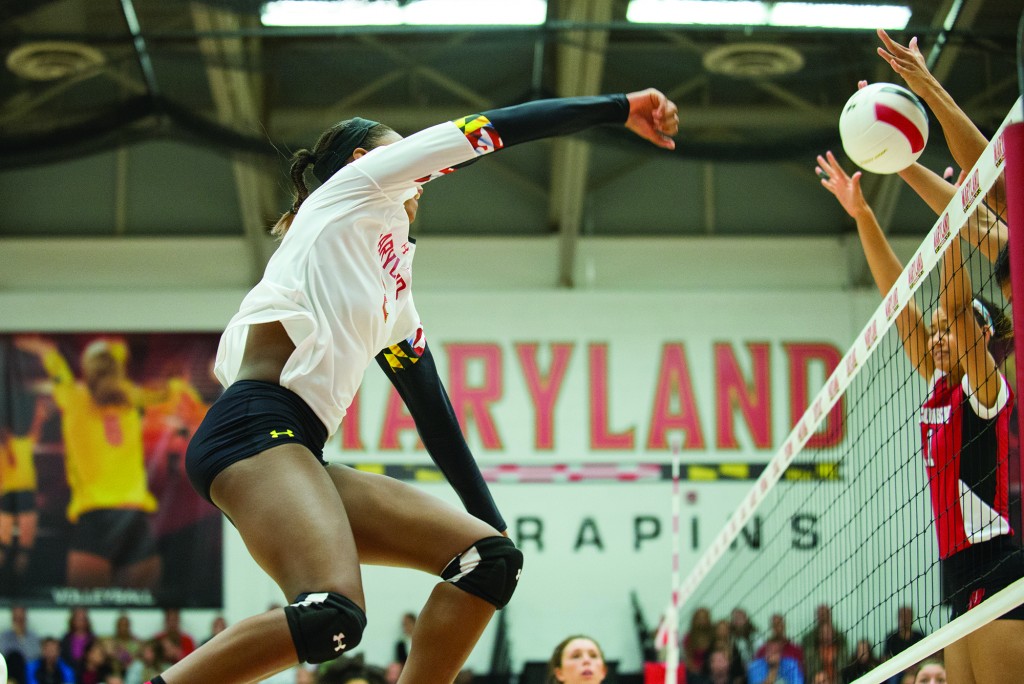 During the Maryland volleyball team’s offseason, Hailey Murray followed a careful routine. She woke up at 5:30 a.m. for yoga and spin classes. After completing those sessions, she joined teammates at the gym for practice.

The senior middle blocker has already experienced the benefits of such a strict regimen — she was named the Maryland Invite MVP after registering 1.77 kills per set and a .513 hitting percentage in the three-match tournament last weekend.

“She’s a robot,” coach Steve Aird said. “She just completely sold out to be in great shape. And because she was the only middle we had in the spring, because Katie [Myers] was still coming back, she got 100 percent of the reps.”

When Myers, a redshirt freshman middle blocker, returned to the lineup for Maryland’s season-opening tournament, she and Murray each set a team-high of 14 block assists. As a team, the Terps out-blocked Northeastern and UMBC, displaying their net dominance after emphasizing that area over the summer.

Murray finished with 93 blocks last year, good for third most on the team. Myers thinks she can improve to be one of the best net presences in the Big Ten.

“She has always been someone I’ve looked up to, even during the recruiting process,” Myers said. “She works so hard and then it’s so great just watching her, asking her questions. Always great having an upperclassman in the same position so they can always help you out.”

As one of two seniors on the team, Murray serves a key leadership role. She said practicing yoga allows her to maintain calm in loud environments, and her poise under pressure gives underclassmen teammates an example to follow.

Prior to Maryland’s match against UMBC, Murray stood apart from her teammates as they watched the Retrievers finish warmups. While the rest of the squad talked excitedly before the season-opener, she absorbed the scene in silence.

When it was the Terps’ turn for serving practice, however, she hit first.

Murray has also aided her teammates’ adjustment from high school to college play by describing her own early career experiences to them. When the Terps trailed, 6-3, in the fifth set against Temple on Saturday, she was one of the three veterans, including opposite hitter Angel Gaskin and outside hitter Gia Milana, Aird entrusted to turn the fortunes.

“She had some of the worst matches of her career early, and she was so afraid,” Aird said. “She’s done a great job with the young kids saying, ‘Hey, just play. Have fun, enjoy it.’ She’s hoping they can learn through her experience.”

Murray has started every match of her Maryland career, and Aird said her consistent fitness level has become her own brand of leadership.

With pre-dawn yoga hours and a commitment to her physical well-being, Murray hopes her durability can continue.

“My goal is to do something athletic at least every single day, if not twice a day,” Murray said. “The best thing you can do for yourself is be in the best shape of your life today. So, just getting one percent better every little increment you can.”