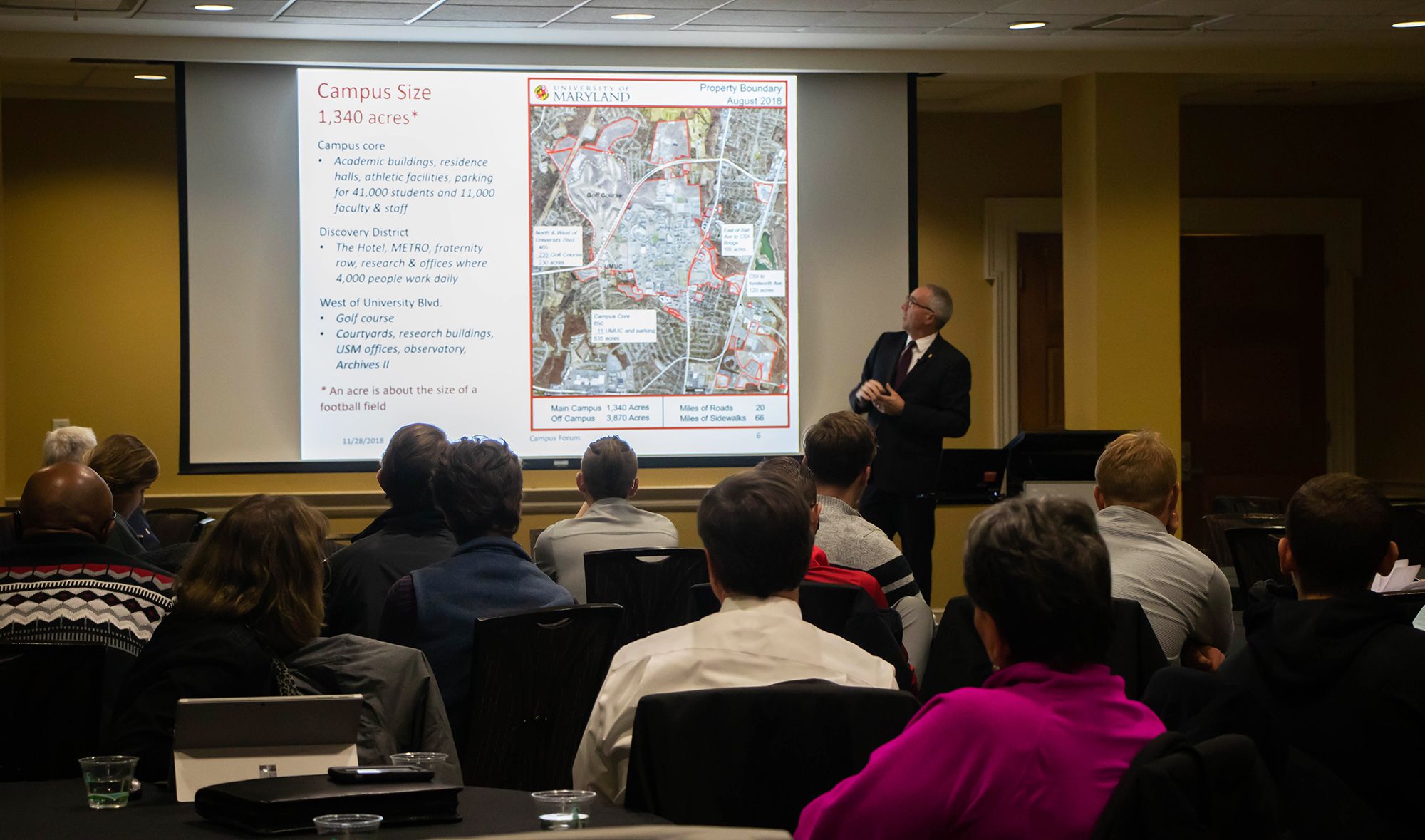 The Division of Administration and Finance held a forum in Stamp Student Union’s Grand Ballroom on Nov. 28, 2018, about a proposal to repurpose a portion of the university's golf course. (Julia Nikhinson/The Diamondback)

University of Maryland students and faculty expressed their concerns on a proposal to build illuminated intramural fields on the university’s golf course at a Wednesday town hall meeting.

Administration and finance vice president Carlo Colella laid out the proposal, which would aim to accommodate intramural groups who do not currently have an illuminated practice space, to a crowd of about 40 people in the Stamp Student Union.

The university has 14 intramural sports for the fall semester, according to the Department of Recreation and Wellness’ website.

Teams often fail to secure areas needed to practice during the day, Colella said, forcing some teams to meet at night. But there are more intramural teams than available illuminated space, so some are forced to play as late as 1 a.m.

Colella presented slides that detailed different options for how many fields could be added — one design with five fields, and another with four. This plan is to make up for two fields that will be removed when a new dorm and dining hall are constructed on the varsity practice fields beginning in spring 2019.

The space issue hasn’t just affected intramural sports. Several club sports teams have not been able to become official, SGA-recognized organizations because they don’t have places to practice, said SGA President Jonathan Allen. Additionally, hundreds of students are on waitlists for intramural programs for the same reason, he said.

“I think the need for additional recreational fields has been demonstrated — there’s no doubt to that,” said Allen, a senior government and politics major.

“More field space is going to allow more academic success,” said Tabatabai, a senior neurobiology and physiology major. “[Students] will have more flexibility with their schedules, and not only that, but it’s a safety issue — if they have to walk home in the dark very late, that’s not the most ideal situation to have.”

The proposal also outlines the addition of a new track and field facility, and additional parking, though it remains unclear how many spaces it would contain.

Construction on several projects — including the Brendan Iribe Center and A. James Clark Hall — have decreased available parking. In the last three years, the campus has lost 1,278 total parking spaces, Colella said. Lot 1 is also estimated to lose an additional 345 spaces during Purple Line construction, which will be completed in 2022, Cara Fleck, Department of Transportation Services spokesperson, said in April.

But David Allen, DOTS’ executive director, hopes the university will hold off on pushing to build more parking. He wants the campus community to decrease its use of single-occupancy vehicles.

“In any place — a campus, hospital or city — you either need more spaces or fewer cars, and we’re in the fewer cars area,” he said. “There are other ways to get to campus, through busing and providing incentives to not park on campus.”

Proposal disadvantages include that the university’s golf course might change from its current 18 holes to nine, and could have environmental impacts.

Geoff Rinehart, a lecturer and turfgrass management advisor for the Institute of Applied Agriculture, took issue with altering the golf course. He said that it make the space less environmentally friendly and push alumni away from using it.

“There is very little storm water running off that property compared what it would be for synthetic fields,” he said. “The other thing is alumni use and alumni pride, I do know that there is a tremendous amount of alumni pride in that golf course.”

Norman Starkey, the chair of the Maryland Golf Course Coalition, said he thought adding more parking, practice fields and a track would be detrimental to the local waterways, including College Creek, which runs off into the Anacostia watershed.

“Once you put impervious spaces for parking, there’s nothing for water to suck up, and it runs off into the lake,” he said. “It doesn’t take a rocket scientist to say that it’s bad to take up green space for parking.”

The project is still in planning stages and and requires approval from the Independent Site Review Committee, which reviews proposed sites for future construction projects and then the Facilities Council, which makes facility-related recommendations to this university’s president, Wallace Loh.

This site is set to be reviewed by the Independent Site Review Committee in the next week, said Allen, who is on the committee. From there, the Facilities Council is set to approve or deny the proposal in the next month, Colella said.