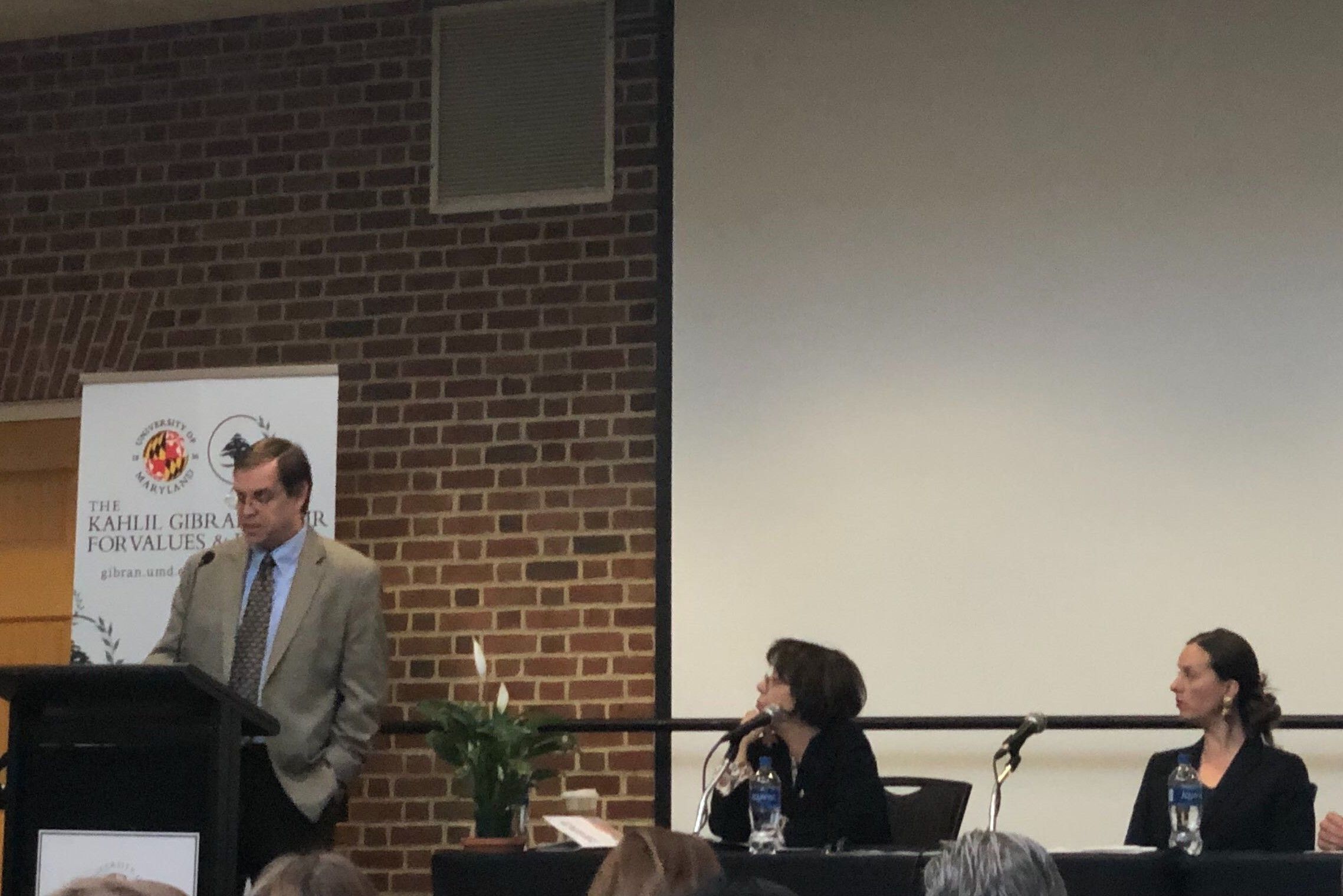 The Khalil Gibran Chair for Values and Peace hosted 10 professors from across the world who gave presentations on Wednesday March 27, 2019 about the wide-ranging impacts of three Arab-American writers, Kahlil Gibran, Ameen Rihani, and Mikhail Naimy, who championed multiculturalism and peace-building between the East and the West at the turn of the century. (Photo by Shreeya Agarwal/For The Diamondback)

At a University of Maryland seminar Wednesday, professors discussed the wide-ranging impacts of three Arab-American writers who championed multiculturalism and peace-building between the East and the West at the turn of the century.

“If you look closer at the plot, the characterization and the narrative style and structure of their works, we often see a sort of inability to escape the patriarchal worldview that they were accustomed to,” said Elizabeth Saylor, a professor at Middlebury College in Vermont, of the three writers: Kahlil Gibran, Ameen Rihani and Mikhail Naimy.

Saylor’s talk was part of the seminar “Adab-Al Mahjar,” Arabic for “the literature of those who migrated/immigrated.” The seminar is hosted by the Gibran Chair for Values and Peace, a program in the behavioral and social sciences college.

But while these writers presented critiques of gender oppression in their own works, she said they often did so in a manner that “replicated the very patriarchal worldviews they sought to protest.”

Gibran was a writer and poet who came to prominence in 1923 after publishing his book The Prophet, which championed the idea that there is common ground among all religions.

The poetic essay collection attracted international attention and made Gibran the third best-selling poet of all time behind Shakespeare and Lao-Tzu, according to Maya Montgomery, a junior and current intern for the Gibran Chair.

Rihani published The Book of Khalid in 1911, which is regarded to be the first American novel to be written by an author of Arab descent, Montgomery wrote. And Naimy was most known for his poetry that deviated from traditional Arabic form.

“Gibran, Rihani and Naimy were all very aware of the social issues of their time and were writing as though they could have been writing about issues today,” said Aina Krupinski-Puig, a senior economics major who works for the Gibran Chair.

The three authors actively spoke for women’s rights, Krupinski-Puig said, as well as the unification of people around the world in the name of social justice.

“They all touch on women’s roles and they mention the equality of women and men which are qualities that we talk about now. Their ideas, although constructed many years ago, are still applicable now,” she said. “I think that it’s great that students such as myself are learning about them.”

Other presenters who discussed the authors’ writing and poetry included professors from Princeton, Columbia and the University of London.

Attendees to the all-day event at Stamp Student Union included Arab-American scholars, Naval Academy students and university professors from around the world.

Montgomery noted the authors’ writings have “endured” to the present day, despite having written their works in the early 1900s because they wrote about issues such as gender, diversity and social justice, all of which are still relevant and important issues in society today.

“I think they are of interest to students because their literature is beautiful and impactful,” Montgomery said. “I hope that people can see their legacies and their celebrations as a part of the larger celebration of immigrants on campus and around the U.S.”