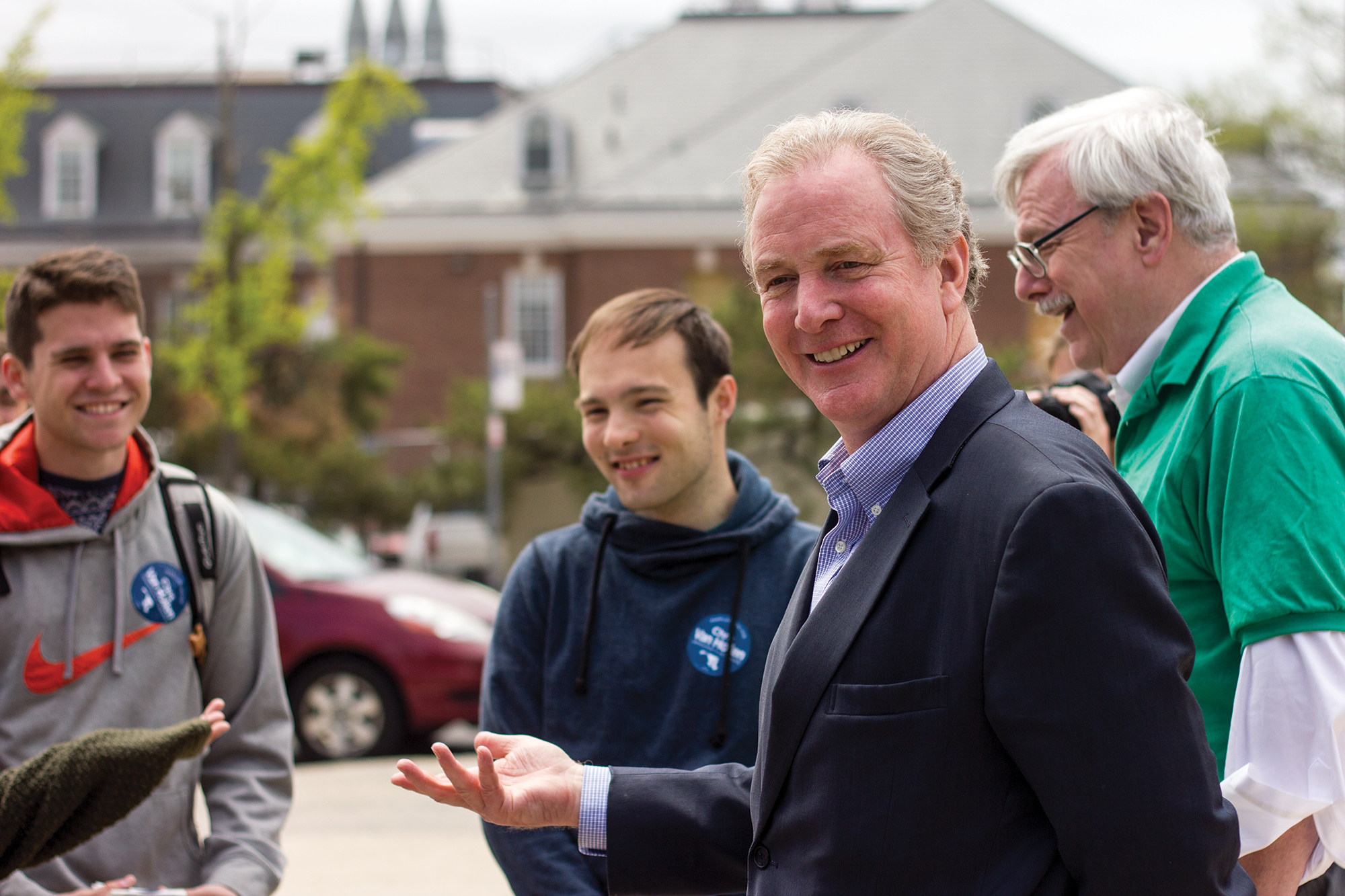 Five members of Maryland’s congressional delegation are among the 169 United States representatives urging President-elect Donald Trump to rescind his appointment of Stephen Bannon as chief strategist.

The letter these legislators signed was circulated by Rep. David Cicilline (D-R.I.), and states that Trump’s choice for a top White House role undermines his promise to unite a divided America.

As executive chairman of the alt-right website Breitbart News, Bannon oversaw articles that called Bill Kristol a “Renegade Jew,” suggested that “Young Muslims in the West are a ticking time bomb,” and said the alt-right is a “smarter” version of “old-school racist skinheads.”

Rep. Chris Van Hollen, who won Maryland’s open U.S. Senate seat, was one of the legislators who signed the letter. He tweeted a photo Tuesday standing next to a sign that read, “Fire Bannon.”

“If Trump wants to be ‘president for all Americans,’ he can start by rescinding his job offer to Bannon,” Van Hollen tweeted. “He has no place in the White House.”

If Trump wants to be “president for all Americans,” he can start by rescinding his job offer to Bannon. He has no place in the White House. pic.twitter.com/SeXULjobb9
— Chris Van Hollen (@ChrisVanHollen) November 15, 2016

Maryland Rep. Steny Hoyer, the House Democratic Whip, also was not listed as a co-signer of the letter, though he released a statement Monday saying Bannon’s “leadership of Breitbart … ought to be seen as disqualifying for a role at the White House.”

“As we seek to move forward from this divisive election, it is incumbent upon the President-Elect to show all Americans that the vile bigotry and misogyny that in large part characterized his campaign will not be carried over into his administration,” Hoyer wrote.

Hoyer’s spokeswoman Mariel Saez wrote in an email that, “as a Member of Democratic leadership, Congressman Hoyer does not sign onto every bill or letter put forward by his colleagues.”

“But he made clear with his statement that Steve Bannon’s appointment is unacceptable and he agrees the President-Elect should rescind it,” she wrote.

It is unclear what, if any, role Bannon will have at Breitbart after Trump assumes the presidency, according to The Washington Post, but he remains on the masthead.

Civil rights groups have joined political figures in denouncing Trump’s choice for his chief strategist. The Southern Poverty Law Center released a statement saying Bannon “simply has no business in the White House.”

“In July, Bannon boasted that Breitbart News was ‘the platform for the alt-right,'” SPLC’s President Richard Cohen wrote. “The alt-right, as we know, is simply a rebranding of white nationalism and is the energy behind the avalanche of racist and anti-Semitic harassment that plagued social media platforms for the entire presidential campaign.”

The Anti-Defamation League’s CEO Jonathan Greenblatt also put out a statement Sunday, calling on Trump “to appoint and nominate Americans committed to the well-being of all our country’s people and who exemplify the values of pluralism and tolerance that makes our country great.”

In her concession speech, Democratic presidential nominee Hillary Clinton told voters they owe Trump “an open mind and the chance to lead.” On Tuesday, Edwards tweeted that Trump’s appointment of Bannon reminded her of a Maya Angelou quote.

“When someone shows you who they are believe them; the 1st time,” she wrote.

Donald Trump’s nomination of Steven Bannon reminds me of Maya Angelou quote: When someone shows you who they are believe them; the 1st time.
— Rep Donna F Edwards (@repdonnaedwards) November 15, 2016

Sen. Ben Cardin (D-Md.) wrote in a statement that Bannon’s appointment “deeply troubling.” Cardin serves as the special representative on anti-Semitism, racism and intolerance for the Organization for Security and Cooperation in Europe Parliamentary Assembly.

“He has been a proud poster-child for white nationalism, anti-Semitism and misogynistic views,” Cardin said in a statement. “Unless he can show a clear break from these divisive views, Stephen Bannon should not be allowed anywhere near the White House, let alone advising the President of the United States on all matters.”