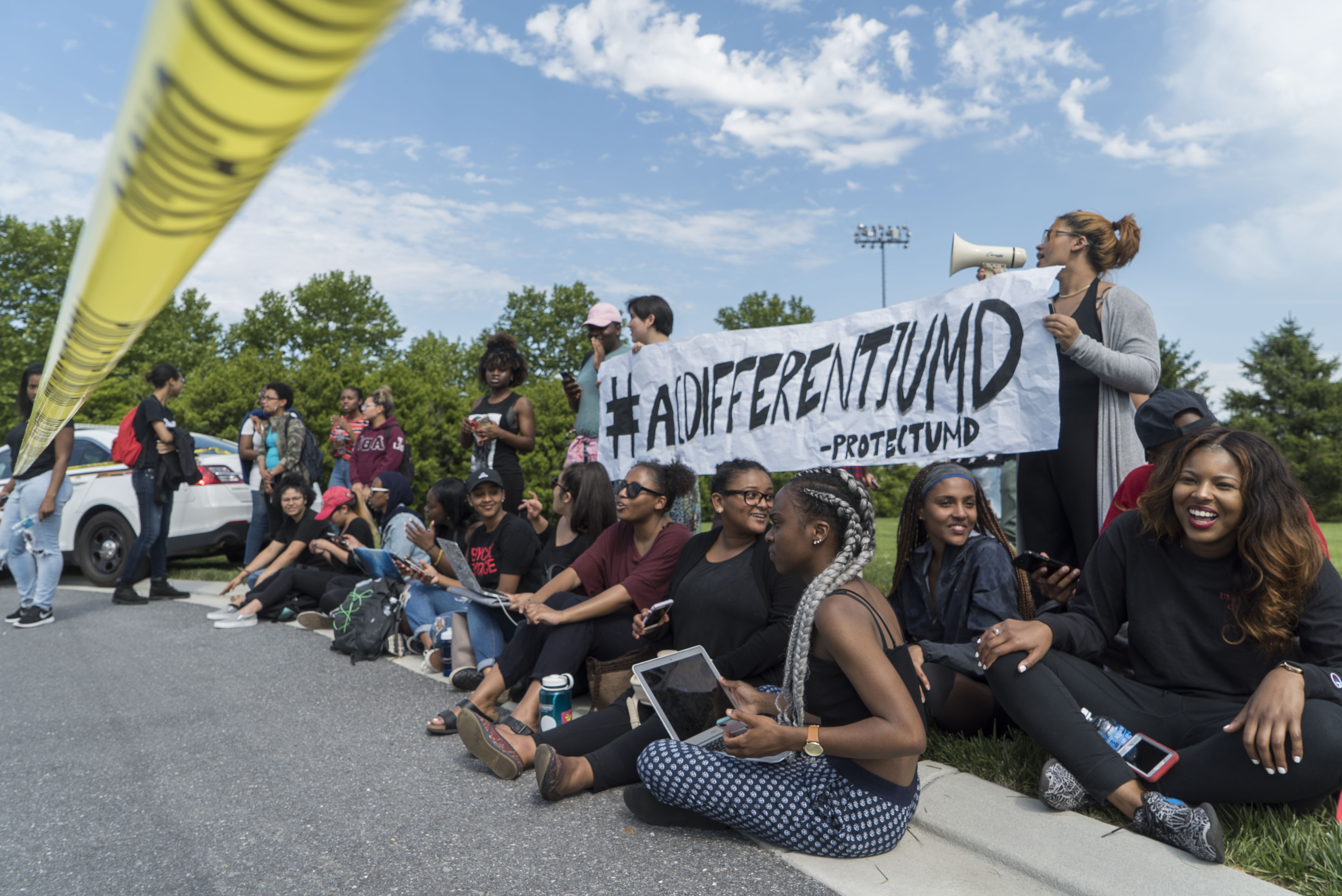 Dressed in black on the steps of the Main Administration Building, Alesia Robinson faced a crowd of students and lambasted this university’s handling of a noose found in a campus fraternity house.

“This is not an isolated incident or just a Greek life incident,” the senior public health major said through her megaphone. “There is a culture of racism and bigotry on this campus. That’s why we’re taking this to President Loh.”

University Police responded to reports of a noose in the Phi Kappa Tau chapter house in April, and are investigating it as a hate bias incident.

On Wednesday afternoon, members of ProtectUMD arranged a sit-in at the Main administration Building to demand this university take action on this and a recent spate of incidents threatening minority students on the campus.

Chalkings advocating for the deportation of undocumented students, among other pro-President Trump messages, were discovered outside Stamp Student Union about a week earlier. White nationalist posters from groups such as Identity Evropa and American Vanguard have been found in multiple locations around the campus since December.

The students congregated in the Stamp food court before marching to the administration building. ProtectUMD aimed to hold a sit-in there from 2 p.m. until their demands were met, according the group’s Wednesday press release.

They requested immediate responses to hate speech by this university, diversity training for all SGA-recognized and Greek organizations and the creation of an external review board to investigate hate bias incidents that occur on the campus.

About 100 students turned out for the event. Protesters brandished a long white banner with the words “#A[DIFFERENT]UMD” in black marker, as they marched across the mall chanting, “Stand up. Walk out. We will protect this house.”

The students’ chants also included “Black Lives Matter” and “UMPD, we want transparency” as they crossed Regents Drive and climbed the steps to the administration building, where they stated their demands through a megaphone.

Vice President for Student Affairs Linda Clement came out of the building to address those participating in the sit-in.

“[The noose] was a despicable act,” Clement said. “We’ve outlined a number of things that are in progress around Title IX and undocumented students.”

Clement said university President Wallace Loh was not in the building and the large number of students could not enter due to safety concerns.

[Read more: ProtectUMD has 64 demands to aid vulnerable students. These are the stories behind them]

Students then shouted Loh was hiding, and the administration was purposefully avoiding taking legitimate action.

After Clement went back inside, students proceeded to pound on the building’s doors and demand action.

“It’s not fair that [Loh] is throwing his colleagues out to us,” Robinson said. “[They’re] taking the bullet that he should be taking.”

In an email sent to The Diamondback, Clement said she “invited [students] to meet and speak with me individually so we can continue to engage in discussions around these important issues we are facing.”

The demands ProtectUMD presented Wednesday were three of the 64 the group had brought to the administration in November. ProtectUMD held a walkout protest earlier that month.

Danielle Gillis, a senior English and journalism major, said she attended the previous meeting between students from the coalition and the administration.

“It was about six or seven from the coalition,” Gillis said. “Linda Clement was there and then some other administrators. President Loh was not at that meeting. Whenever someone said anything that they didn’t like, there would be smirks from administration.”

Today’s protesters did not feel like Loh was taking them seriously, said Lauryn Froneberger, a member of ProtectUMD and the president of this university’s NAACP chapter.

“On a campus where diversity and inclusion is literally on every single poster and we have all these talks about fearless ideas, we’re presenting fearless ideas and no one is listening to us, so why promote these messages?” said Froneberger, a senior journalism major. “I’m graduating from the university, but I don’t feel proud to be an alumni. If it wasn’t for the black community, I wouldn’t feel safe here.”

Gillis said she was frustrated with the administration’s response.

At 3:15 p.m. students marched to Loh’s University House on the campus.

Some expressed their disappointment in the administration’s handling of the protest.

“[Clement] shouldn’t have come out,” said Fatima Ahmed, a junior public policy major. “If Loh was here, he should have come out. He should be our voice. He should be the one speaking to us directly … He’s who we look up to. He’s our president.”

Kyle Vetrano, a sophomore government and politics major, said he was impressed by the solidarity he saw at the protest.

At 6 p.m., the students decided to disperse and reconvene later because the event inside was for the Incentive Awards Program, which awards scholarships to minority students, Froneberger said.

“We’re just going to regroup and figure out the next plan of action,” Froneberger said. “That could be talking with UMPD and Loh, talking with some other students and figuring out if we want to do a rally, or a teach-in so other students could get educated about the issue, or to go down to frat row and do anything.”