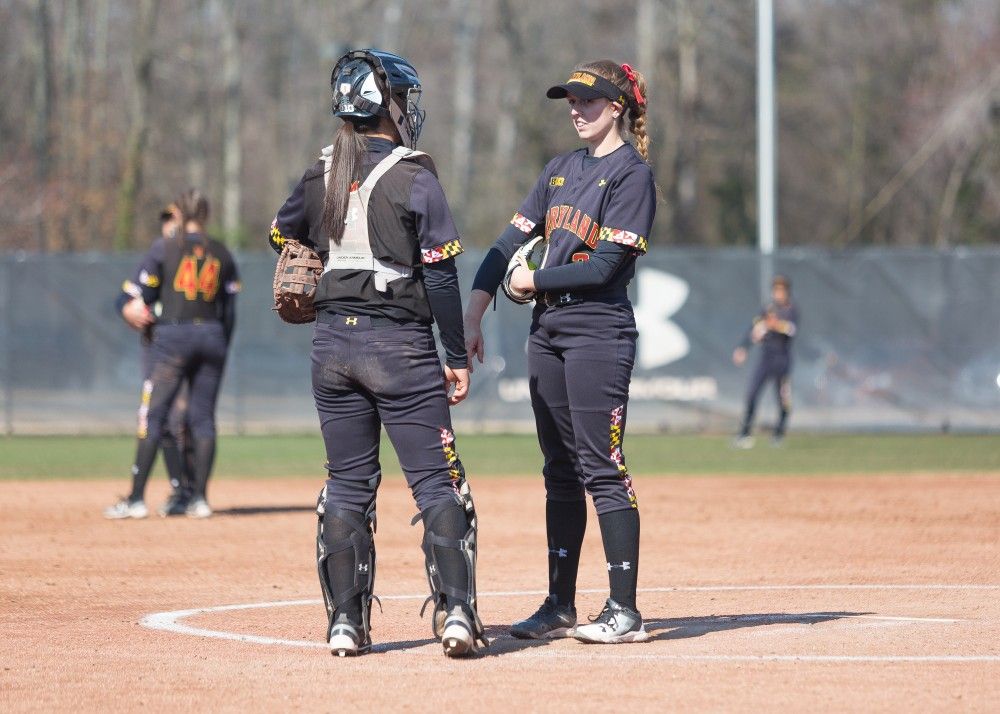 After losing its top pitcher from 2018, Maryland softball has utilized a rotation of options in the circle early in 2019, each with varying degrees of success.

But senior Sami Main, in her third start of the season, put together the best outing of her college career Saturday. The pitcher allowed one hit — a single in the bottom of the third — but shut down the rest of the Louisiana-Monroe lineup during a five-inning complete-game shutout.

Behind Main’s efficient showing, the Terps erupted on offense and clubbed their way to an 8-0 win in the first of two Saturday games, dismantling the Warhawks. In the nightcap, though, Maryland’s plate production didn’t translate, and a fifth-inning implosion pushed the game out of reach and completed another fifth-inning duel, 12-4.

Against UL-Monroe, infielder Taylor Okada went 3-3 at the plate, starting with a long double in the third inning that got the Terps’ hitters rolling. Catcher Gracie Voulgaris then drove a single to the left side, bringing Okada and infielder Regan Kerr home to give the Terps an early lead.

Okada lost no momentum in the next inning, hitting a single that advanced outfielder JoJo McRae, who then scored on an error.

With the Terps holding a 4-0 lead in the fifth inning, Okada came up big again with a two-run single, followed by another two-run single from infielder Anna Kufta to seal an 8-0 win.

Though Main’s spotless performance was the highlight against the Warhawks, pitching proved to be the Terps’ downfall in the nightcap.

Maryland put up a fight early, though, against Houston — the same team it had stymied 4-2 on Friday.

The Cougars held a 2-0 lead going into the third inning, but once Kufta got up to the plate, that all changed. The junior crushed a two-run homer to tie the game at two, and infielder Sammie Stefan followed it up with a solo home run later in the inning to give the Terps a one-run lead.

The Cougars, however, fought their way back in the bottom of the third to tie it up again. The Terps’ offense had a lull in the fourth inning, and Houston was able to get a runner home despite a pitching change for the Terps, as Victoria Galvan came in for Kiana Carr.

And with the game tied at four heading into the bottom of the fifth inning, it appeared Maryland was headed for another tight bout with the Cougars.

But the Terps fell apart in the bottom half, giving up eight runs and sealing the game in Houston’s favor. Maryland tried swapping in freshman Amelia Jarecke for Galvan amid the scoring frenzy — even putting Carr back in the pitcher’s circle near the end — but the damage had been done.

Maryland will look to close out the Houston Classic with a win against Nevada on Sunday at 10 a.m.