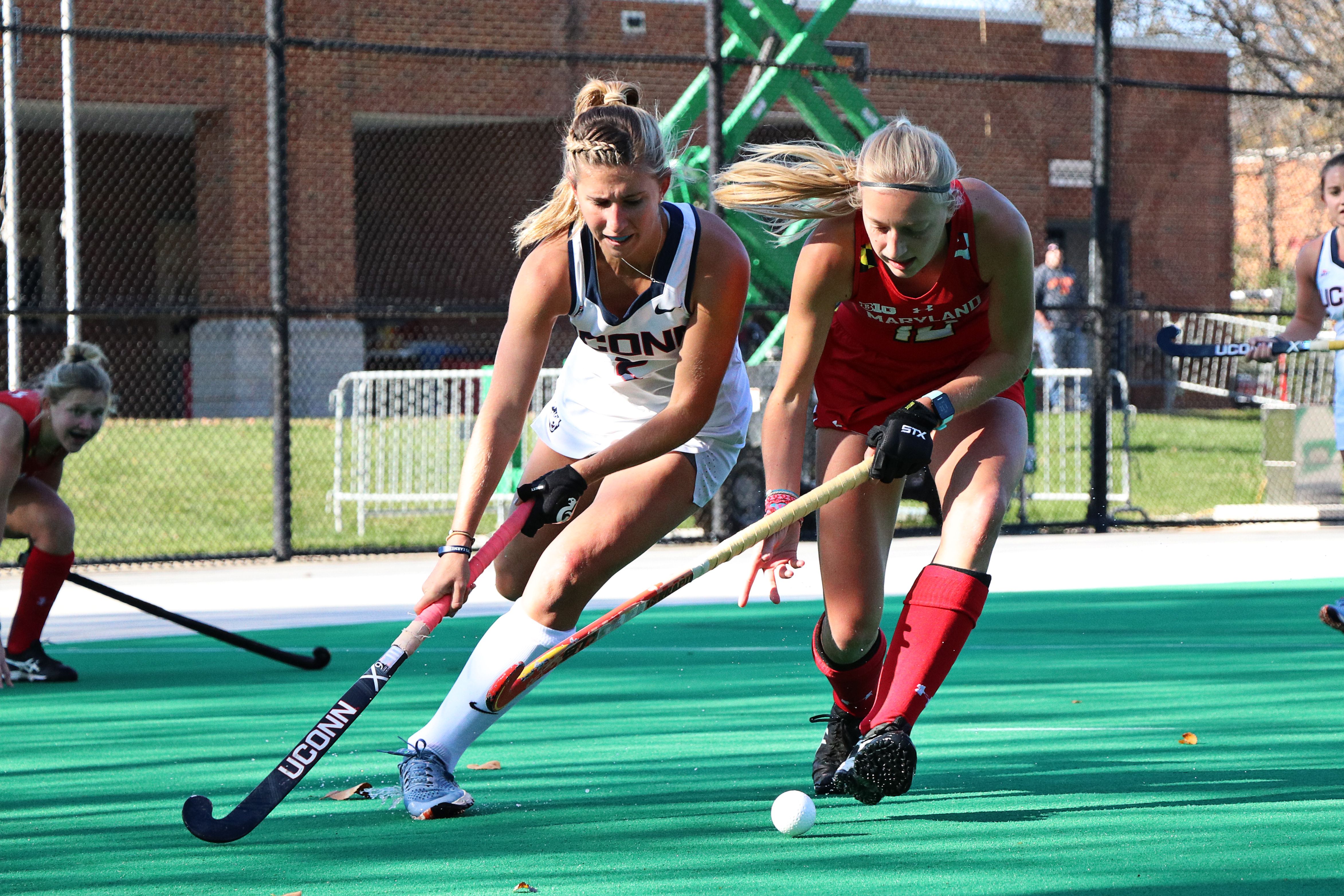 Maryland field hockey players rushed the field to surround midfielder Madison Maguire after her overtime goal in the NCAA quarterfinals against UConn.

Before Maguire’s score, the Huskies had the two best chances of the extra period. Defender Hannah Bond made a goal-line clearance to keep the Terps alive, and UConn forward Svea Boker swung and missed with a one-on-one chance against goalkeeper Sarah Holliday.

But Bond’s diving effort, Boker’s missed opportunity and Maguire’s score shortly after meant the Terps avenged that heartbreaking loss Sunday, avoiding an upset loss and ending the Huskies hopes of repeating as national champions by knocking them off in overtime, 2-1.

With the win, the Terps advance to their 19th final four in program history, which takes place next weekend in Louisville. Maryland will face Princeton with the hopes of advancing to its second consecutive national championship.

The defenses dominated early in Sunday’s quarterfinal, with both squads battling for possession near midfield. Maryland had two scoring chances in the first six minutes and had the edge in shots for much of the first half, but UConn scored the first goal in the 24th minute.

The Terps responded quickly. About three minutes later, defender Bodil Keus sent a hard pass deep into the circle from near midfield, and forward Bibi Donraadt was waiting at the post to tap it in.

UConn had the better chances in the second half, stifling Maryland’s offense and winning the shot battle, 6-2, after halftime. The Terps earned just one penalty corner all afternoon, and failed to convert the 69th-minute chance.

Coach Missy Meharg said after the game that UConn was a team with the talent for the final four that perhaps deserved a better draw than the No. 2-seed Terps.

“UConn is a great team. They have a great defensive three backs and goalie,” Maguire said. “You keep pushing and keep just pounding on the defense.”

Maryland’s defense, meanwhile, held the second-ranked offense in the country to 11 shots and one goal Sunday. UConn midfielder Cecile Piper, who ranks third in the NCAA in points (58) and is tied for sixth in goals (23), had just one shot on goal, which Holliday saved.

UConn couldn’t finish any of its five corners.

Then, in overtime, the Huskies didn’t convert their chances at a winner, and Maryland made them pay. About seven minutes into overtime, Maguire received a pass near the top of the circle, spun and fired home the game-winning goal, and her teammates spilled onto the field with their national title aspirations still intact.

“So happy for our team and our staff to be going back to the final four,” Meharg said. “We played with real fight and vigilance. … We’re just looking forward to getting back down to Louisville.”