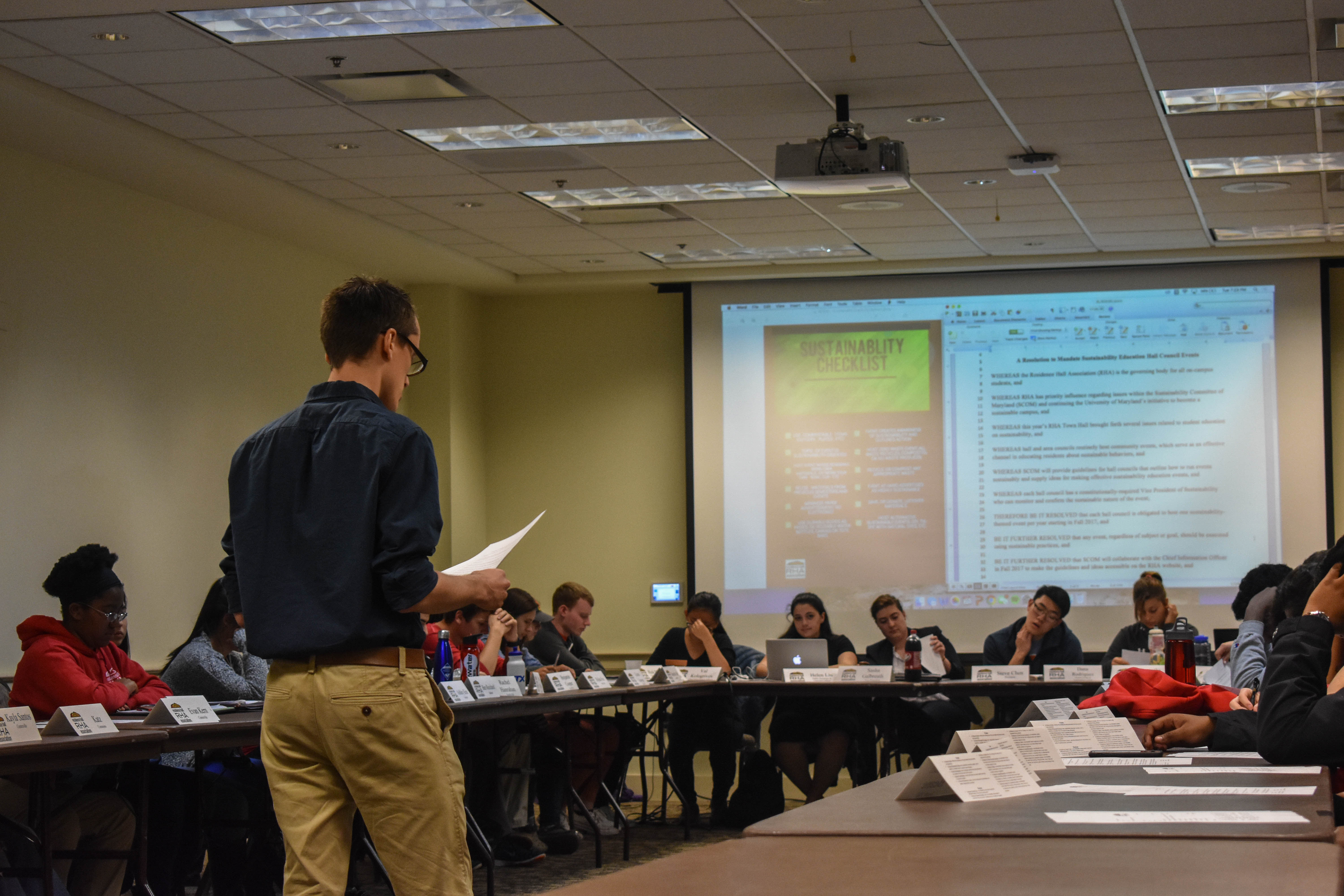 To carry on this university’s efforts in becoming a sustainable campus, the resolution also seeks to provide guidelines for hall councils on how to run events sustainably and supply ideas for making sustainability education events.

At the last meeting under current executive board positions, the resolution passed 37-2, with 0 abstentions.

“This would be a very effective [platform] for us to educate our residents about these, especially as we look to expand composting across campus,” Reichard said.

Reichard said that while the resolution mandates residence hall councils to hold one sustainability-themed event per semester, it does not require them to be conducted using sustainable practices. However, that may be considered for a future resolution, Reichard added.

Before the meeting, RHA Vice President Sasha Galbreath, a senior government and politics major, said the resolution did not have this requirement to allow the council to have more freedom in planning their events.

“We didn’t really make the details ‘stringent,’ so to speak,” Galbreath said before the meeting. “We kind of wanted the hall and area councils to enjoy a certain amount of flexibility in doing this.”

Residence hall councils have organized sustainability events in the past, but this resolution ensures that doing so will be an expectation moving forward, Reichard said.

Reichard referred to a previous event in Oakland Hall, where students were able to make their own chemical-free surface cleaners, as one example of what a sustainability-themed event could be.

“We recognize that some hall councils are already doing this, and that’s great,” Reichard said. “We would just like to see all hall councils do this every year, so it’s a recurring event, something that really builds on the education for our residents.”

This resolution demonstrates that RHA hall and area councils are as committed to promoting sustainability policies as this university is, Galbreath said.

On April 20, the Student Sustainability Fund Review Committee and University Sustainability Council approved more than $330,000 to fund sustainability-related projects on and off campus. Projects include creating a sustainability degree for graduate students, increasing the amount of water bottle filling stations in university buildings and installing more recycling bins near fraternity and sorority chapter houses.

In 2009, this university created its first climate action plan. By 2015, it had achieved its targets of reducing its carbon emissions by 25 percent, according to the 2016 Sustainability Progress Report. An updated plan calls for a 50 percent reduction in carbon emissions, from 2005 levels, by 2020.

“The university just met its climate action plan objectives and expectations, so on the heels of this, we realize that it was the best time to strike and therefore this resolution is coming to light,” Galbreath said.

The RHA senate also unanimously passed a resolution to add an online feedback system to improve communication between Dining Services and students.

This semester, the Dining Services Advisory Board conducted a survey and received responses from 192 students to determine whether they think an online comment box system would be beneficial.

DSAB chairperson Ishan Shah, a sophomore biology major, the author of the resolution, said a majority of the students surveyed were in favor of the comment box system.

The comment form will include “a rating system for several categories, a comment box, and a text box to add an email address if a response from Dining Services is desired,” the resolution read.

In February, a student’s brother found pieces of cardboard in his beef strips at the North Campus Dining Hall. The student posted a photo of what she found on the University of Maryland Class of 2020 Facebook page, attracting the outrage and sympathy of her fellow classmates.

“We are aware that students have more to say than we are hearing, so any way that would increase the communication, we’re in favor of that,” Hipple said. “We want to make sure that the managers hear what’s going on right then.”

Students will be able to access this system by entering their UID. The system is expected to go into effect in fall 2017, Shah said.