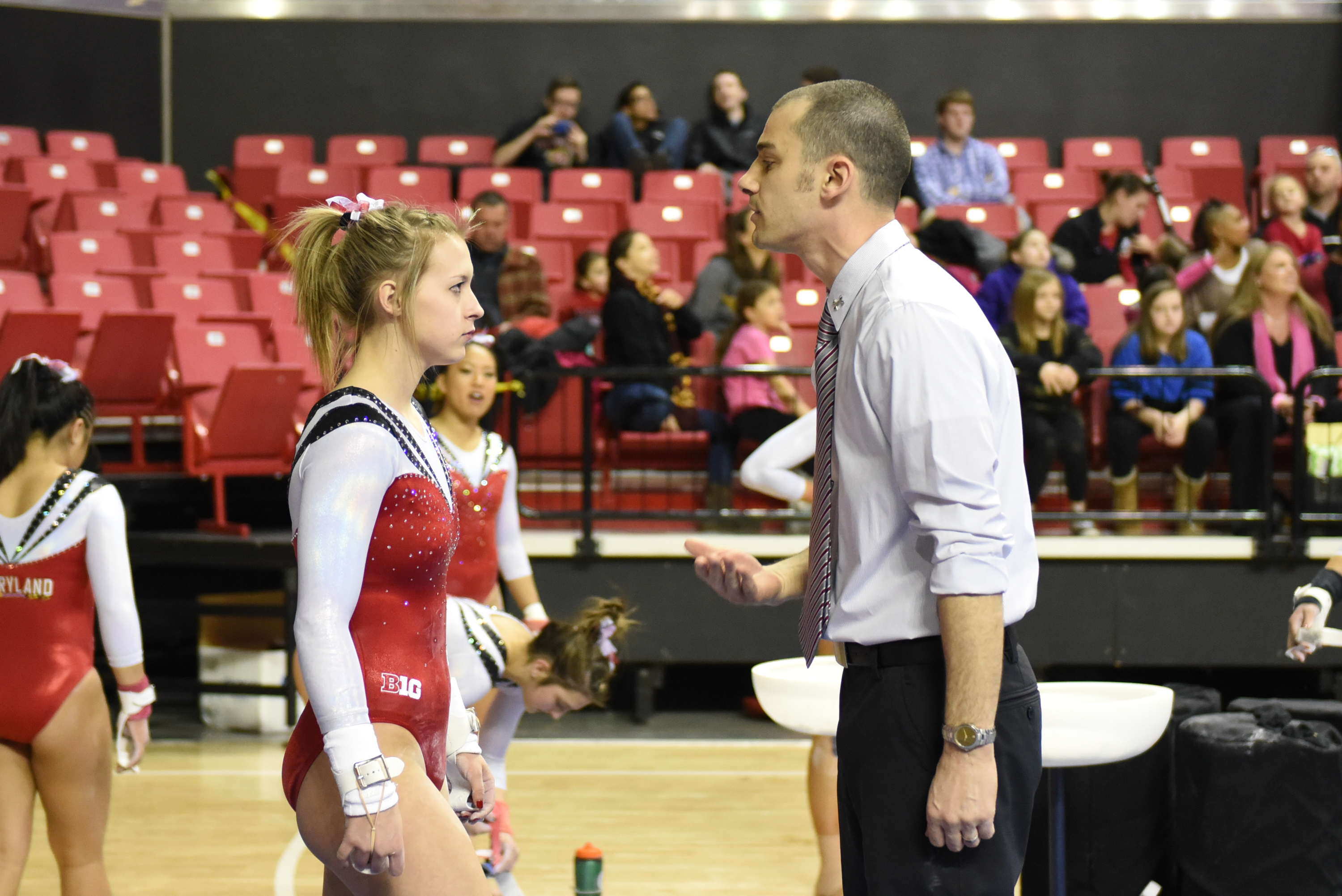 Coach Nelligen gives Abbie Epperson some advice before she performerd her bar routine when the Terps lost to Rutgers, 194.525 to 194.850 at Xfinity Center on Feb. 14, 2016. (Daniel Jenkins/The Diamonback)

So when Epperson woke up from her nap a few hours after the show, she had, “like a thousand messages” congratulating her on the accomplishment.

“I honestly didn’t expect to make it,” Epperson said, “So I wasn’t really waiting for the show.”

Epperson joins senior Kathy Tang and freshman Macey Roberts as the three gymnasts who will individually represent the Terps in Georgia this weekend. And after two weeks of practice, each gymnast has an opportunity to compete for a national title.

“It’s kind of weird. Since I’ve been here, we’ve made regionals,” Tang said. “It’s been an adjustment this year.”

Tang and Roberts will compete on floor, while Tang will also compete on vault.

But for the first time since 2008, the year before coach Brett Nelligan took over the program, the Terps won’t compete in the postseason as a team. The gymnasts said they still aren’t sure exactly what to expect in Saturday’s regional, and Nelligan said practices have been difficult since his team found out whose seasons were over and who still had competitions to prepare for.

“There’s two different modes going on here in practice,” Nelligan said. The qualifiers “are focused on routines and competition, where everyone else is already looking at next year.”

The line between this season and next year is even blurrier for Roberts and Epperson. The two underclassmen both qualified on one event but still train on all four.

While working on the apparatuses on which they won’t compete Saturday, Roberts and Epperson are trying to learn new skills and routines. But on floor and bars, respectively, their focus shifts to perfecting their current routines. For Epperson, this meant making a small change to her performance.

“It’s something I’ve wanted to do,” she said. “I think it looks a lot more professional. … I want to put my best out for regionals.”

Roberts and Tang, meanwhile, will showcase the same routines they’ve been practicing all year. Despite the unusual atmosphere, the team said its practices have been productive. Nelligan also said the team has done a good job of adjusting to unfamiliar territory.

“I think if I was [competing] on all four events, it’d be a little harder to stay motivated [while] watching the rest of my teammates getting ready for next season,” Epperson said.

For Roberts, in her first season with the Terps, the postseason is something she’s hasn’t experienced before. She’ll be competing alongside a pair of veterans, though, which Nelligan said will help her entering Saturday.

“I’m not sure she knows what to expect,” Nelligan said. “I think it’s good for her to know that she can lean on [Epperson and Tang] for advice and what to expect.”

Regardless of past experiences, the trio is keeping an open mind. They’re just hoping to enjoy their time in the postseason, even if it’s not quite the way they envisioned it at the start of the year.

“I just hope it’s a really fun experience,” Epperson said. “I hope we all don’t hold back and put all we have out there.”