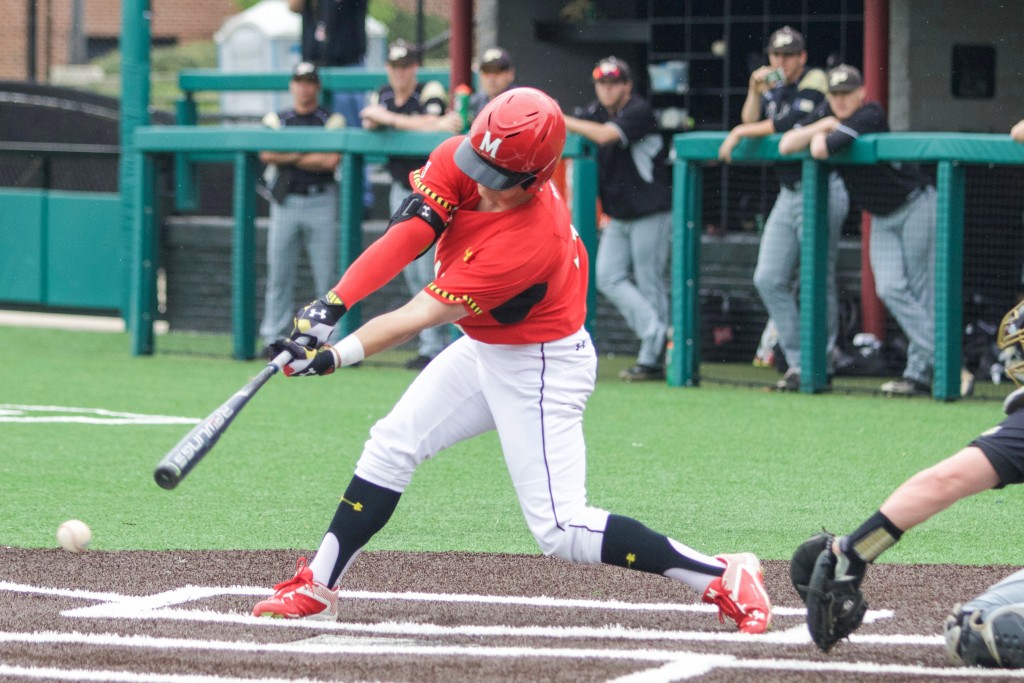 Maryland baseball senior first baseman Kevin Biondic wound back for his first collegiate pitch in the eighth inning of the Terps’ season opener against Tennessee, rifled it toward the plate, and hit outfielder Jay Charleston.

The Terps, short on relief options, opted for Biondic in a pressure situation despite his lack of pitching experience with the program.

Biondic tried out pitching during last summer in the Northwoods League, tossing a 1.62 ERA in 16.2 innings. And after putting runners on first and third in the eighth inning on Friday night, he got out of the jam by striking out Tennessee catcher Benito Santiago, preserving Maryland’s 3-0 lead. He let loose a fist pump as he walked off the mound having put the Terps in position to secure a 4-0 win.

“Dunn’s just one of the best hitters I’ve ever seen,” Vaughn said. “He did a great job managing the strike zone tonight and got two pitches up in the zone and got after them pretty good.”

But Maryland ran into five baserunning outs, squandering the opportunity to extend its lead on several occasions. The miscues, a result of Vaughn’s vow to create “chaos” on the base paths, nearly came back to haunt the Terps. Biondic, though, maintained his composure in an unfamiliar scenario to ensure Maryland’s first victory of the season.

Maryland’s aggressive tendencies on the bases led to mixed results.

In the fourth, third baseman Taylor Wright’s steal of second and third helped to create a second run and extended a lead the Terps never relinquished.

But Maryland runners were picked off first three times, Costes was nabbed trying to steal second, and right fielder Randy Bednar was thrown out attempting to take third on a grounder back to Tennessee right-hander Zach Linginfelter.

Bloom didn’t appear to need extra run support as he methodically worked through Tennessee’s lineup. His seven-inning, 97-pitch outing kept Tennessee off-balance throughout, as he worked his way out of jams in the first, third and seventh innings. He repeatedly induced ground balls to avoid allowing a run.

“That’s vintage Bloom right there,” Vaughn said. “He was attacking the zone all night. He was efficient with his pitches. I thought he had to battle and get his feel in the first and it was like, ‘Man, he threw a lot of pitches, let’s see how this rolls,’ and you blink and it’s the seventh inning and he’s still rolling zeros out there for you.”

Dunn, who earned preseason third-team All-American recognition from Baseball America, pulled his homers over the right field fence in the second and eighth innings. In the top of the ninth, Costes hit a double into the right-center field gap to score Bednar from first, pushing the Terps’ lead to four.

The late runs supported a bullpen full of question marks. The Terps saw eight relievers depart the program prior to this year, and eight underclassmen are set to contribute out of the pen this campaign.

After Biondic worked his way through a shaky first career outing, closer John Murphy worked around two walks in the ninth to seal Vaughn’s first win as a head coach.

“I couldn’t wait to get that last out in the ninth,” Vaughn said. “But mainly so happy for the guys. They competed hard, they did exactly what we wanted them to do.”