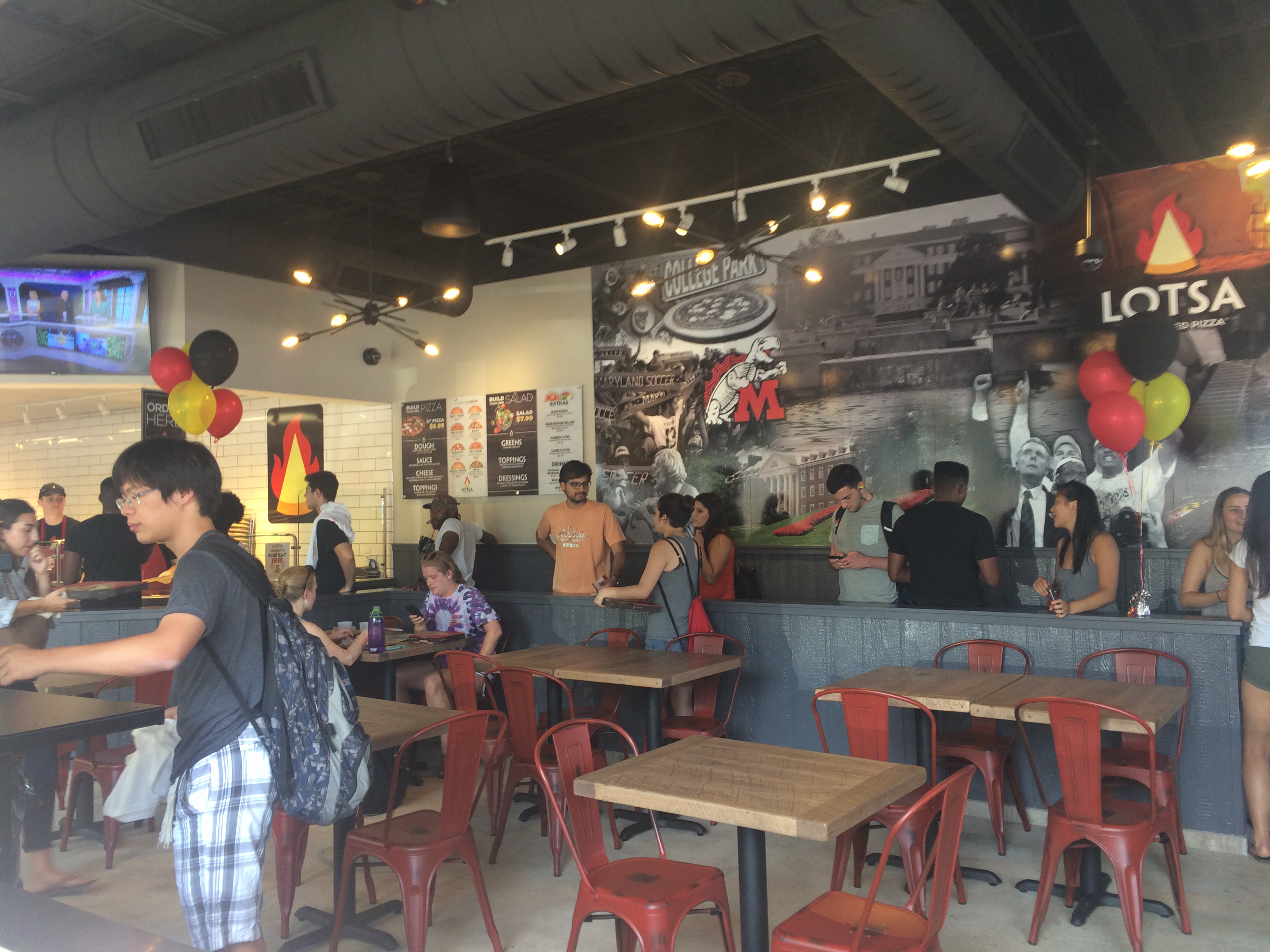 Anthony DiGangi, chief operating officer of Lotsa’s parent company Colmont Restaurant Group, said College Park was a “perfect fit” for Lotsa. The restaurant chain, which has two other locations in Maryland, looks for high-population, Division I college markets with a night life, he said. Lotsa’s corporate offices are just 30 miles away from College Park, and one of the owner’s daughters is currently a student at the University of Maryland.

[Read more: Another pizza place is coming to College Park this summer]

“We definitely stand out. We’re a little bit different from everybody else. We really don’t concern ourselves that much with the competition,” DiGangi said, adding that the store is open late and uses fresh ingredients.

Blaze, located just across the street from Lotsa, also offers 11-inch build-your-own pizzas. Lotsa’s pizzas are $8.99 for five toppings and $1 more for each additional topping while Blaze charges $8.75 for unlimited toppings.

Lotsa will be open from 11 a.m. to 11 p.m. Sunday through Wednesday and 11 a.m. to 3 a.m. Thursday through Saturday. Lotsa’s pizzas also spend 150 seconds in their ovens, 30 seconds less than they do at Blaze, DiGangi said.

After waiting in a line that stretched out the new restaurant’s door, sophomore computer engineering major Zaakira Ahmed and sophomore criminology and criminal justice major Fallon Howard ate their $3 build-your-own pizzas. Ahmed and Howard said it was better than Blaze and they would come back. For Ahmed, though, the cost may prove prohibitive.

Daniel Thompson, a junior mechanical engineering major, said that a big draw of Lotsa is its location, since it’s closer to South Campus Commons than Blaze and other pizza places.

Derek Kim, a sophomore biology major, came to the grand opening for the $3 pizzas and to take advantage of the free Slurpees being given away next door in a separate promotion from 7-Eleven. He said the location is a definite advantage for Lotsa but he would still be partial to Blaze.

“On a day when you’re dying of hunger and going to get pizza 100 percent, is this going to be your go-to? I’m going to say no,” he said.

Ken Ulman, the University of Maryland’s College Park Foundation’s chief strategy officer for economic development, said the foundation’s Terrapin Development Company currently owns the Knox Road location. While the foundation is looking for a more diverse mix of retail tenants, he said, the foundation wanted an active restaurant to bring more “vibrancy” to the corner.

Ryan Chelton, the city’s economic development coordinator, said both parties have done their research and determined Lotsa will be successful in College Park.

Lotsa’s grand opening was during the summer when most university students weren’t on the campus, but Ulman said this gives the restaurant time to “work out the kinks” and prepare for when the student population is larger. He said Lotsa would have another $3 build-your-own pizza event at the end of August to welcome the community.

Chelton said the city’s Downtown College Park Management Authority will support Lotsa in the future and welcome them to any city events including downtown businesses, such as street fairs and business listings.

“We really want to be more about Maryland than about Lotsa,” DiGangi said. “That’s another thing that makes us different: We are Terp fans. Terps are important to us.”