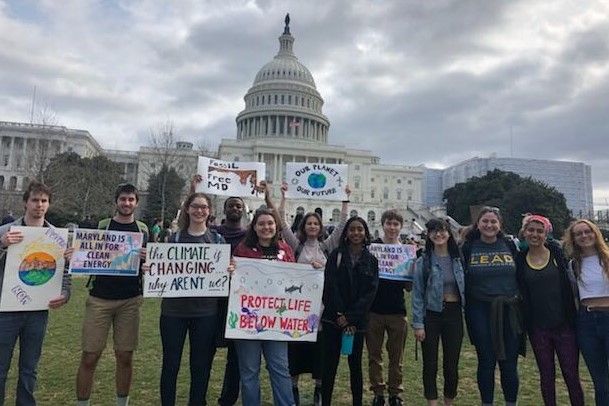 By noon on Friday, the lawn in front of the United States Capitol was crowded with hundreds of protestors, including about a dozen students from the University of Maryland.

“No action, no future!” they chanted as they held up homemade signs with slogans such as “The climate is changing, why aren’t we?” and “Don’t burn my future.”

The protest was part of a worldwide youth climate strike that took place everywhere from North and South America to Asia, Africa and Europe. Tens of thousands of climate activists took to the streets, many skipping school, to demand stronger action on climate change.

Luna Homsi, a senior anthropology major at this university who attended the strike, said she was inspired by activists who came before her to come out and show support on Friday.

“I think we’re at a point here where there is no other choice but to change,” Homsi said. “Our lives are at stake.”

The global protest was kickstarted by 16-year-old Swedish student Greta Thunberg, who began staging climate protests outside the Swedish Parliament last year. Since then, she has sparked an international movement that demands government officials address the issue of global climate change. She was recently nominated for a Nobel Peace Prize for her actions.

Rep. Ilhan Omar (D-Minn.) made an appearance during the protest. Omar outlined a new bill she plans to introduce to end the “corporate welfare” for the fossil fuel industry, as well as a bill she believes will lead us into a “zero waste future.”

“It is unacceptable that we have communities like Flint that do not have access to safe and clean drinking water,” Omar said.

After Omar ended her speech, she looked back towards the capitol.

Omar’s 16-year-old daughter, Isra Hirsi, took to the stage next to her mother to speak about the issue. Hirsi is one of three co-founders and co-directors of the U.S. Youth Climate Strike.

Hirsi stressed the importance of educating girls about climate change, especially women of color, who she said are disproportionately affected by the issue.

“A girl with a book is unstoppable,” Hirsi said.

Friday’s protest addressed the broad issue of climate change but was specifically aimed at pressuring government officials to cut greenhouse gas emissions and take action to ensure global warming remains below 1.5 degrees Celsius. That threshold was set by the Paris Climate Agreement, an 2016 agreement ratified by nearly every country in the world to reduce global emissions.

In 2017, President Donald Trump announced the United States would be withdrawing from the agreement, but the earliest the U.S. can withdraw is Nov. 4, 2020, according to the terms of the deal.

Many U.S. governors, including Maryland Gov. Larry Hogan, have committed to reducing emissions consistent with the terms of the agreement whether or not the country remains in the deal.

According to the United Nations Intergovernmental Panel on Climate Change, if significant action is not taken to address climate change in the next 11 years, global warming will rise above the 1.5 degrees threshold, which could result in catastrophic climate activity.

“Unless we commit to reducing our carbon tax in the next 12 years, our planet is going to die. So I think it’s completely reasonable to demand radical measures, such as cleaning our oceans and getting our energy from renewable sources,” Stavisky said. “None of these are unreasonable policies and we all know that we have the science to make it possible.”

Stavisky’s frustrations were echoed by other protestors, who voiced their anger at current lawmakers in office by chanting “Vote them out!” toward the Capitol, screaming that they had been ignored by their own government for too long.

Amelia Avis, a senior government and politics major and director of sustainability in this university’s Student Government Association helped organize protestors from this university.

She held a sign that read, “Protect life underwater.”

Avis said she is confident real environmental change could be made if students continued to used their voices to speak to representatives in office.

“Use your power and use your position at UMD, which is in the middle of our nation’s capital. But also act locally — we can act at a campus level, at a city level and at a county level, and that is how things get changed,” Avis said. “If you build a coalition from the ground up, then you can build support as high as it can go.”