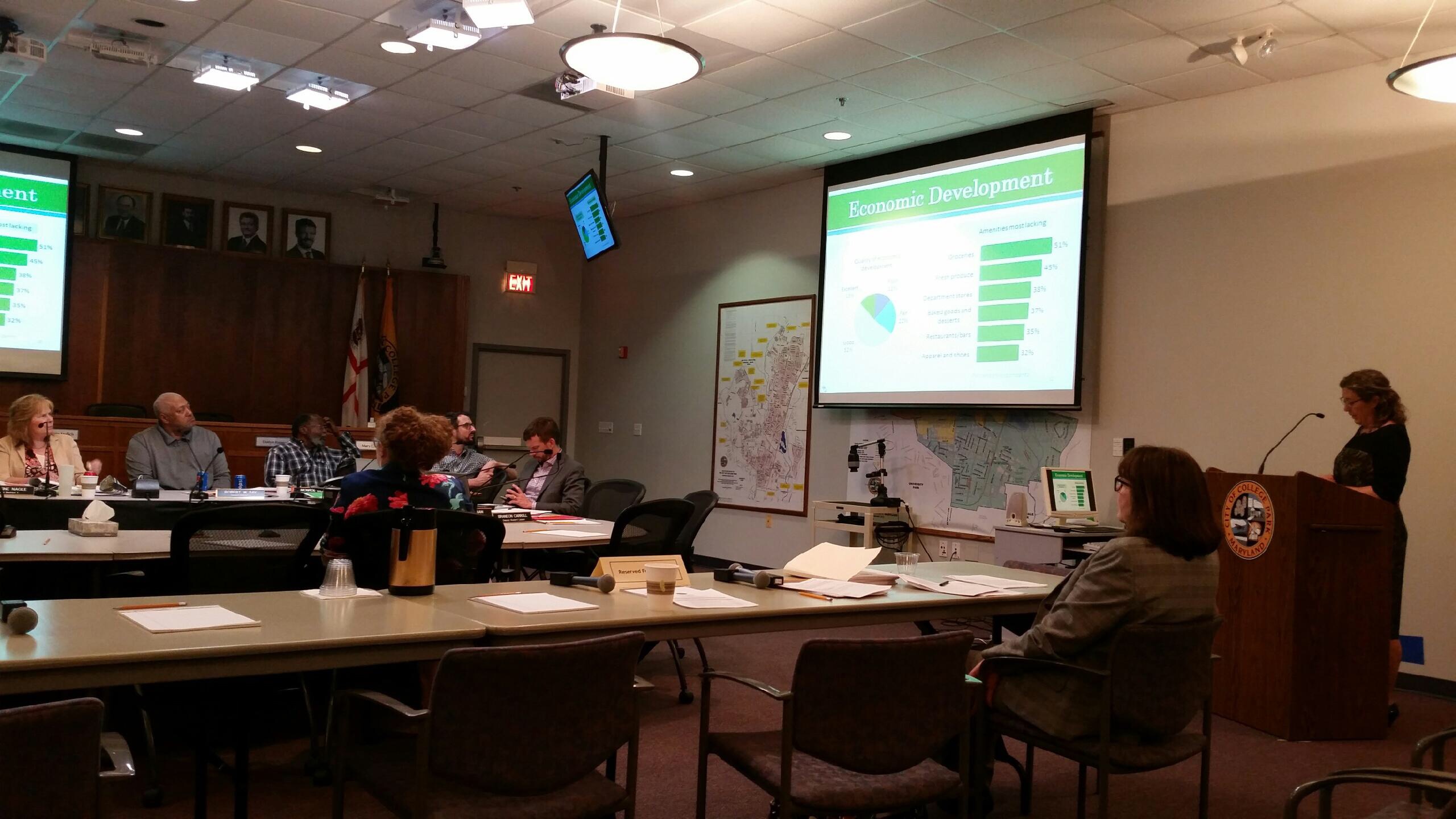 The majority of College Park residents surveyed during a city study said they like their neighborhood, though many raised concerns about the city’s schools, traffic and crime.

The survey, which was sent in January, aimed to gauge resident opinions of city services and overall quality of life. Of the 1,862 homes randomly assigned a survey, 343 returned them. The 18 percent response rate was about what the city expected, said College Park Mayor Patrick Wojahn.

“In the past, we’ve done open participant surveys, which are not as statistically significant because they’re not randomized,” said Ryna Quinones, the city’s communications coordinator who oversaw the survey on the city’s side. “This was the first completely randomized survey that we’ve done.”

Nearly 80 percent of city residents said their neighborhood was an “excellent” or “good” place to live, and more than 70 percent said they’d recommend living in College Park to someone who asked.

“We have a very active and vibrant community,” Quinones said. “I’m always talking to residents and meeting them, so … it’s nice to see that represented in the survey as well.”

About half of respondents said they felt College Park was a good place to raise children. Thirty-nine percent gave a positive opinion of the city’s K-12 education system, while 28 percent said it was “poor.”

The city doesn’t have any direct control over the education system, but it’s still taken steps to improve education, Wojahn said. The College Park Academy, a charter school which offers a blended-learning curriculum for sixth to 10th graders — the school plans to expand a grade each year until 12th grade — should be able to guarantee seats for all College Park residents within the next year, he said.

While College Park’s elementary schools are “high-class,” some of its middle and high schools lag behind, Wojahn said. Some schools have issues with infrastructure and facilities maintenance, which the city is trying to remedy, he added.

Respondents raised concerns about crime in College Park, with about half deeming it a “moderate,” “major” or “extreme” problem. Though rates in the city have decreased, District 2 Councilman P.J. Brennan said, the perception of crime is still a problem. Most crime in the city is property crime such as breaking and entering and theft, Wojahn said.

“The city can do a better job of making people understand that the city is getting safer,” he said, adding that College Park should “continue to make people aware of how to remain safe.”

However, the city’s biggest area of improvement is its shortage of shopping, dining and entertainment options, according to the survey. About 50 percent of respondents felt grocery stores are lacking.

In 2016, the U.S. Agriculture Department identified College Park as a food desert within Prince George’s County, though the city is trying to improve options in the nearby area, Wojahn said. In addition to the Whole Foods in Riverdale Park, which opened on April 12, Lidl, a German grocery chain, was cleared in October to develop a site at the current Clarion Inn site on Route 1.

The city is also bringing in nearby retail, as Junction Vintage, a boutique formerly operating in Washington, prepares to open in College Park sometime in June 2017. Brennan said adding amenities like this can sometimes elicit concern.

“Putting retail in any new city, in any new location is a huge risk for a lot of business owners,” Brennan said. “A lot of it’s going to be based on the true demand and attracting those businesses that are willing to take those risks.”

Respondents also cited traffic, specifically downtown, as an area for improvement. Thirty percent said traffic flow on major streets was “poor,” while 81 percent said traffic was a problem in their neighborhood. But traffic will always present some sort of issue in metropolitan areas, Brennan said.

“The reason we’re feeling it more today is because we have more reasons for people to come to the College Park area,” Brennan said. “We’re starting to feel the same levels of congestion that the rest of the areas are feeling.”

CORRECTION: Due to a reporting error, this story previously stated the number of burglaries and thefts in College Park dropped to a 10-year low. This information was based on University of Maryland Police Department data, which presents statistics for University of Maryland property, not the City of College Park. The article also previously stated the city has not had a reported a criminal homicide in more than 10 years. This was based on the same statistics. The article has been updated to reflect these changes.