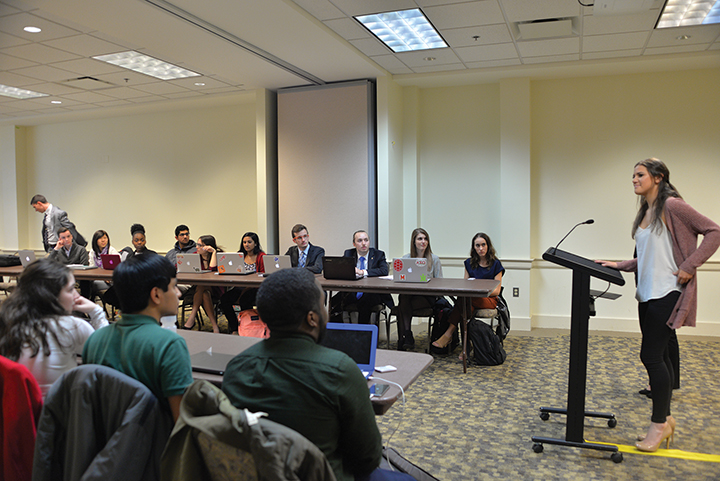 The SGA passed a resolution Wednesday night in Stamp Student Union urging the University of Maryland’s administration to declare this university a sanctuary campus.

The resolution vote was nearly unanimous, with one dissenting vote and no abstentions.

“This is something a lot of marginalized communities have been fighting for, and it came to fruition in this bill tonight,” said Erica Fuentes, PLUMAS president and the Student Government Association’s diversity and inclusion committee deputy director.

There has been widespread concern over the future of Deferred Action for Childhood Arrivals — a 2012 executive order implemented under the Obama administration that allows undocumented immigrants who came to the U.S. as children to stay in the country to work and study — as President Trump has signaled in the past that he plans to repeal it.

On a sanctuary campus, a university’s administration commits to not sharing the immigration status of students unless the federal government obtains a court order demanding the information. While this university does not have formal sanctuary campus status, it still follows sanctuary campus policies, making a designation “unnecessary,” university President Wallace Loh wrote in a campus letter on Jan. 26.

Standing before about 40 people, six students testified to the importance of declaring this university a formal sanctuary campus, including the presidents of PLUMAS and Muslim Political Alliance.

There are 113 students at this university who are covered under DACA as of fall 2016, according to Institutional Research, Planning and Assessment data. Twenty students are also covered under Maryland’s DREAM Act, which grants an in-state tuition discount to undocumented college students.

Fuentes said she was excited the vote was nearly unanimous, and added that she hopes the administration will follow the lead of other Big Ten schools. Rutgers University and the University of Minnesota have already given their campuses formal sanctuary status.

“It signifies to the country that the University of Maryland is going to stand with its students no matter what,” she said.

Junior mathematics and philosophy major Sarah Eshera also spoke to the legislators about the importance of sanctuary status, noting “sanctuary” is more than just a word.

“[Sanctuary is] a label that shows we do not cower to the threats of a bigoted and hateful government, and that we will stand with our undocumented students,” said Eshera, who is also MPA’s president.

Madelyne Ventura, a junior mathematics major, said she is optimistic the administration will heed student voices and take action.

“They will take a stance on this issue and finally listen to what we’re saying and declare this campus a sanctuary campus,” she said.

Legislators spoke on only the affirmative side of the resolution, emphasizing the SGA is responsible for listening to students’ needs and rebutting the idea that being a sanctuary campus would threaten federal funding for this university. Trump expressed intentions to hold federal funding from designated sanctuary cities in a Jan. 25 executive order.

“The fact that two of our Big Ten peer institutions are sanctuary campuses, not to mention several others, and yet no one has come for their funding, says something,” said Doron Tadmor, Ellicott community representative and a freshman international business and finance major.

The College Park City Council also showed support when they voted Feb. 14 to send federal officials a letter in support of DACA. In January, Sen. Chris Van Hollen (D-Md.) co-sponsored a bill as well that would protect confidential information of immigrants who applied for DACA.