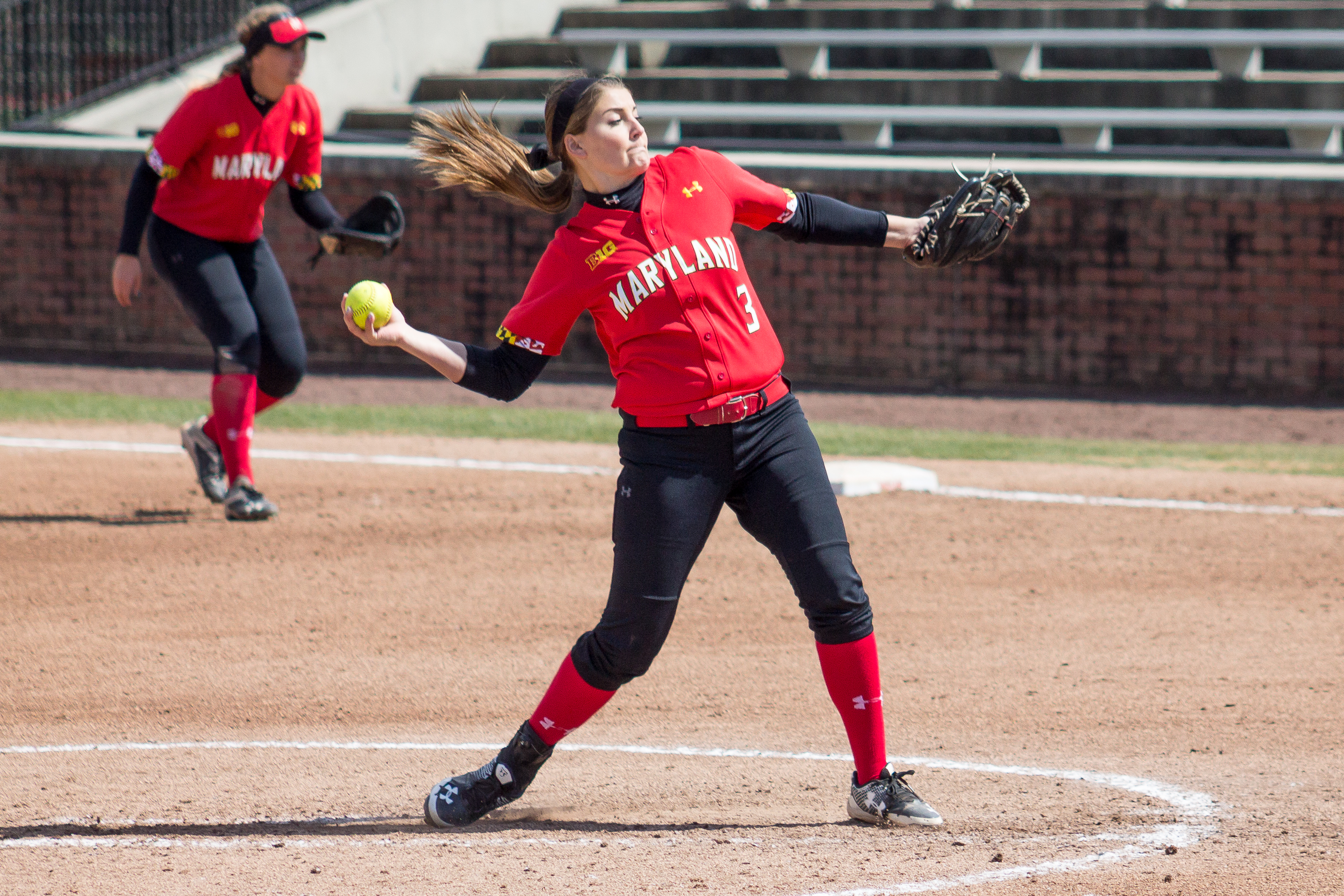 Pitcher Hannah Dewey winds up to throw a pitch during Maryland's 2-0 victory over Michigan State in their double-header series on Sun. April 10, 2016. (Marquise McKine/The Diamondback)

The Maryland softball team delivered offensively after its 12-3 loss to Michigan State on Friday, combining to score 19 runs in the final two games of the series. The team’s increased offensive production resulted in back-to-back victories and its first weekend series victory of the season.

Still, the Terps’ hitting success masked yet another down weekend for a pitching rotation that ranks last in the Big Ten in ERA. They’ll hope to pair better pitching performances with another strong outing at the plate when they face Penn State this weekend.

Terps pitchers gave up 22 runs against the Spartans this past weekend. And if it weren’t for the Terps’ 13-hit performance resulting in nine runs Sunday, their one-run win likely would have resulted in another defeat.

Pitcher Madison Martin leads Maryland with a 4.14 ERA, but she couldn’t find a rhythm in the circle against the Spartans. She left in the fifth inning Friday having allowed six runs on eight hits. Two days later, she allowed five runs in 4.1 innings and earned a no decision.

“We work hard every week and some weeks you just don’t have it,” Martin said. “I just have to keep going and just trust the process.”

The Terps benefited from an improved performance from pitcher Brenna Nation, though, who earned two wins in the series. Nation, 7.38 ERA notwithstanding, earned her fourth win of the year Sunday after pitching 5.1 innings of two-run ball.

In the series finale, she proved to be crucial out of the bullpen. Coach Julie Wright said using the hard-throwing Nation after Martin, who relies on off-speed pitches, kept Michigan State off balance. With Martin sitting on the bench Sunday after starting the contest in the circle, Nation threw a crucial 1-2-3 seventh inning to preserve a tie game.

The Terps won on a walk-off hit by pitch in the bottom of the frame.

“Every team needs people that can pick up each other’s slack,” Martin said about Nation’s contribution. “What makes good teams is being able to have one pitcher go in and do what they need to do and have someone else come in and finish for them.”

“Sunday, I came out with the approach that, like, ‘I’m in control,'” Nation said. “That helped me a lot.”

Wright said she believes Nation’s turnaround was the result of her rediscovering her “swagger” and praised the return of her pitcher’s “sassy smile.”

“She’s just being Brenna,” the coach said. “With everything she’s been through, she had kind of lost that.”

In fact, Wright commented that the whole squad took on a new personality in its series win over Michigan State, and she said she hopes the Terps (11-27, 3-6 Big Ten) can carry their momentum into their matchup with the Nittany Lions (21-17, 8-3).

“How we’re playing right now, I can describe with one word … and that word is ‘edgy,'” Wright said. “It seems to suit us.”