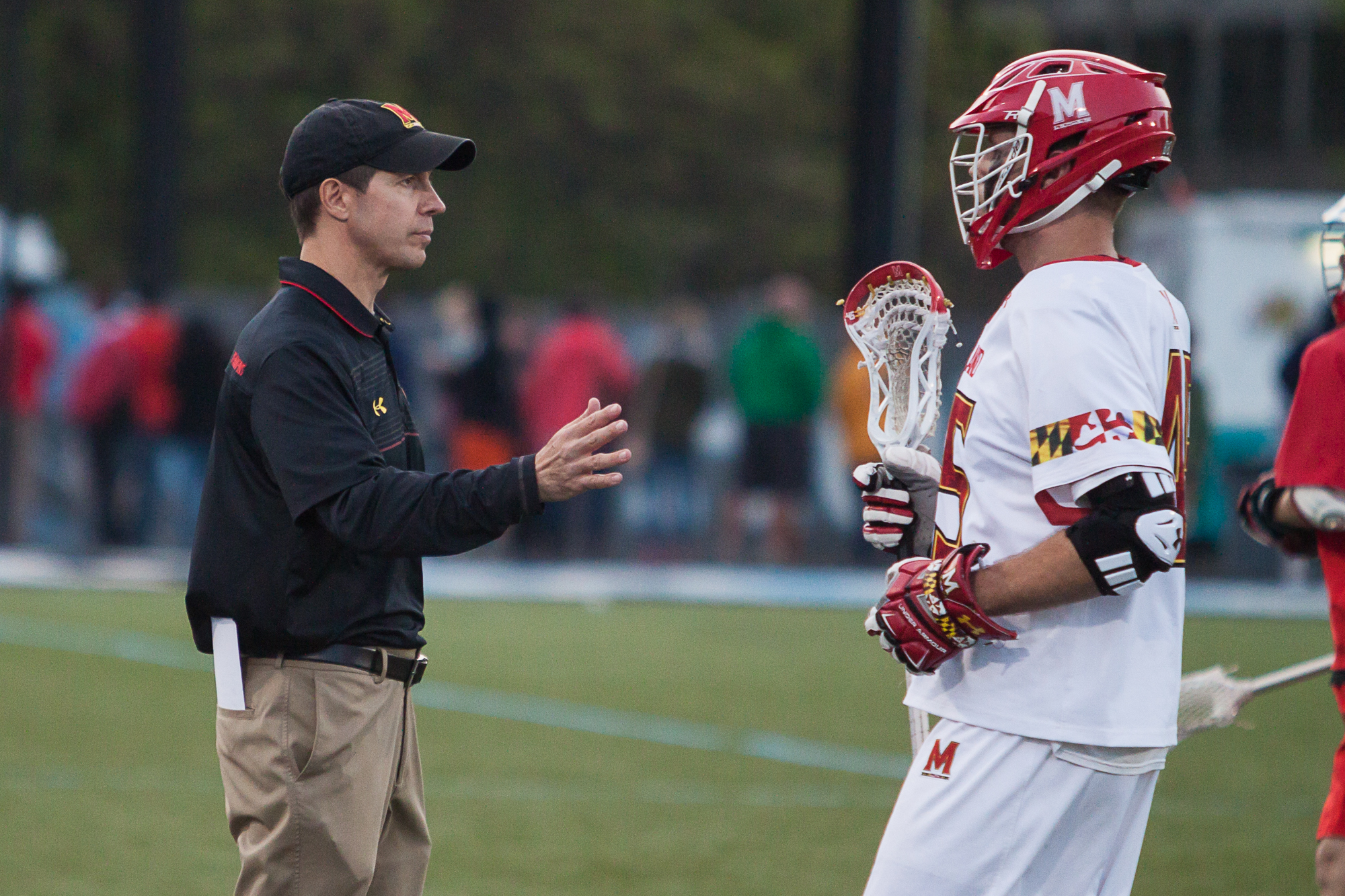 Head Coach John Tillman gives a high five to Bryna Cole as he comes off the field in Maryland's 14-8 victory over Rutgers in the Big Ten Championship at Homewood Field on May 7, 2016. (Reid Poluhovich / The Diamondback)

Before his Maryland men’s lacrosse team battled Rutgers for the Big Ten Tournament championship Saturday night, coach John Tillman had some words of caution for his group.

Before the Terps took the field, no top seed in any of the other conference tournaments had won their championship. He wanted to keep his players’ guards up before they attempted to break the streak against the Scarlet Knights.

A few hours later, the Terps paired the Big Ten Tournament title with the regular season conference crown they earned a week earlier.

The weekend ended with the Terps, Towson and Quinnipiac as the only top seeds to claim conference championship. The other seven No. 1-seeds in automatic qualifying conferences all fell in or before their respective title matches.

Tillman realizes his players grew up in a “different world” than him, having constant access to predictions, rankings and commentary on social media. So he has told his team throughout the season, “just don’t read any of that stuff,” even though the sixth-year coach knows some of his players might do so anyway.

But midfielder Bryan Cole, who’s been with the program for the past five years, said the team still looked to the coaches to set the example of self-focus.

So between the Terps’ 16-9 win against Penn State in the semifinals and their 14-8 win against the Scarlet Knights in the championship, the Terps held a walk-through practice to limit fatigue in the three-day, two-game stretch.

They studied film of Rutgers, who Maryland defeated by three goals on April 16 in College Park. Outside of the team-wide sessions, goalkeeper Kyle Bernlohr and Tillman also watched clips of the Scarlet Knights’ shots to make adjustments from the previous meeting.

The redshirt senior goalkeeper finished with 12 saves in the championship clash, helping ensure the Terps claimed the first conference crown of his tenure.

“We want to make a point of that, but at the same time, this is just another game, and it’s another win,” Bernlohr said of the program’s first tournament victories since 2011. “We’re just trying to get it out of our heads about what’s around us.”

After the Terps received their championship T-shirts and hats and posed for pictures with the Big Ten trophy, Bernlohr, Cole and attackman Matt Rambo, who combined to score 11 points in the two games, joined Tillman at the postgame press conference.

When a reporter asked Cole how the team approached the contest given the fate of the other top squads, Tillman, with his hand propping up his chin on the table, looked at his captain with a smile as he answered.

Tillman thought back to the pregame talk. He thought about the pressure riding on his team for not having won a conference tournament since his first year at the helm of the program. And he thought about the sacrifices his team had made since starting its preparation for the season in August.

So when Cole finished speaking and Tillman fielded the next question, he paused for a moment, the smile still spread across his face.

“I just like being around these guys,” Tillman said. “They’ve really earned it.”