A UMD Naval ROTC member ranked as one of the best among U.S. seniors in her field 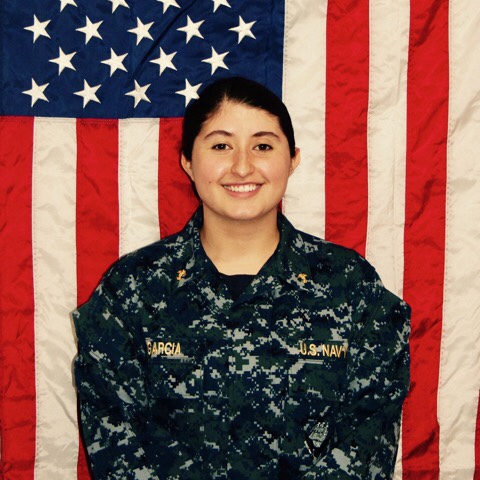 By August 2017, Naval ROTC Midshipman First Class Keanna Garcia will begin duty on her first ship in Japan as a commissioned officer of the U.S. Navy.

This next chapter of her life comes after Garcia’s rank secured her the honor of choosing her ship early on the first day of the ship selection process. Garcia, the only selected surface warfare NROTC member in her class at the University of Maryland, ranked 37 out of 280 midshipmen nationally, falling at about the 87th percentile.

“I’ve just been all over the world,” said the senior kinesiology major, whose mother has served in the Navy for more than 28 years. “I just fell in love with that lifestyle and I, from a young age, just kind of always knew that I wanted to have some type of career where it would be bigger than myself. That’s what I wanted to do. I thought that my mom was like the coolest person in the world, and I just wanted to follow in her footsteps.”

The other three commissioning NROTC seniors will join the U.S. Navy as pilots, Garcia said.

After choosing her homeport in Yokosuka, Japan, Garcia has been in the process of completing her medical appointments and overseas screening to determine if she’s healthy enough to travel, she said. Once she completes all of her appointments, she’ll receive her official orders that will tell her exactly when she’s departing from the Maryland unit to her Basic Division Officer Course in San Diego. There, she’ll learn the basics of navigation, use simulators to practice driving ships in varying conditions and take tests for two months before heading to Japan, she said.

The national ship selection process did not guarantee Garcia the ship of her choice, though. On Feb. 13, Garcia had waited — her own laptop and an office desktop set up — in the Reckord Armory, the indoor drilling and training location for the Air Force, Army and Navy programs for this university’s ROTC. Crowded around her were her mother and father, 10 to 12 other midshipmen and the commanding officer, executive officer, lieutenants and other officers in her unit.

Garcia was nervous and stressed, she recalled. It was the first ship selection day for NROTC members around the country who were chosen to become surface warfare members for the U.S. Navy and will graduate in the spring. Garcia had watched with anticipation as the lists for the different ships began to fill up. The lists were on an active site set up by the U.S. Navy that displayed the different homeports available, as well as the rank and school of selected surface warfare members choosing each ship.

“[Yokosuka, Japan, is] where the destroyers are, which is the ship that I wanted to be on,” Garcia said. “I did all my summer training on destroyers and I just felt most comfortable with them, and I liked them. I chose [the USS Mustin] in particular because I had heard great things about it … and also it was one of the newer ships that are in Japan right now … [newer ships] have less maintenance problems.”

Her nerves were slightly quelled, Garcia remembered, knowing she was choosing her ship on the second hour of the first day of selection. The total selection process spanned over three five-hour days.

The ship selection order is based off a national ranking composed of an NROTC member’s GPA, results of physical readiness tests over the years, their rank against students selected for surface warfare and officers’ inputs, Garcia said.

After waiting, the phone rang. It was Commander Julie Grunwell, Garcia’s godmother’s friend whom she had just spoken with the day before — for the first time ever — to ask for advice. Garcia said she had been surprised, not knowing Grunwell was part of the ship selection process. She told Grunwell her ship of choice, the USS Mustin, and nabbed a spot.

“It felt unreal to me, honestly,” Garcia said. “It still hasn’t really hit me yet that I’m moving to Japan, but I was just so excited that I got what I wanted and I was so appreciative of the fact that my parents could be there and a bunch of my friends came.”

Garcia will be on the ship for at least four or five years, she said, and after that is hoping she “can eventually lateral transfer into working in a hospital and put my kinesiology degree to use … I want to work in a hospital like my mom did, for the Navy.”

For her mother, Commander Diana Garcia, her daughter is already “ahead of the game.”

“When she joins the Navy in May, she will be commissioned as an ensign, and I started out in the Navy as an enlisted [member],” said Diana Garcia, an active duty Navy member. “So I was enlisted for about 14 years, then got commissioned as an officer. … From what she’s seen working around me, like [when we lived] in Spain, she experienced a lot of what I did in the Navy … I think she has a better idea than I did when I joined, and I think she’s going to be a wonderful officer.”

Ensign Rachel Marino, a 2016 graduate of this university’s fire protection engineering program and Keanna Garcia’s mentor in ROTC, said Garcia has displayed leadership, enthusiasm and engagement — even when she was commuting to this university and then to NROTC at George Washington University for the first three years of her college career. This academic year was the first year that this university had an NROTC unit, and Garcia was its first Battalion Executive Officer, which Marino said was “awesome” to see. Holding that position put Garcia in charge of managing this university’s NROTC unit.

“From a mentor-mentee perspective, [I] definitely couldn’t be more proud of the leader that she’s become,” Marino said. “I have absolutely no doubt that she will get any position and be obviously considered for early promotions and things like that very, very quickly. … I think they’ll immediately see her eagerness and willingness to learn — her excitement and passion.”