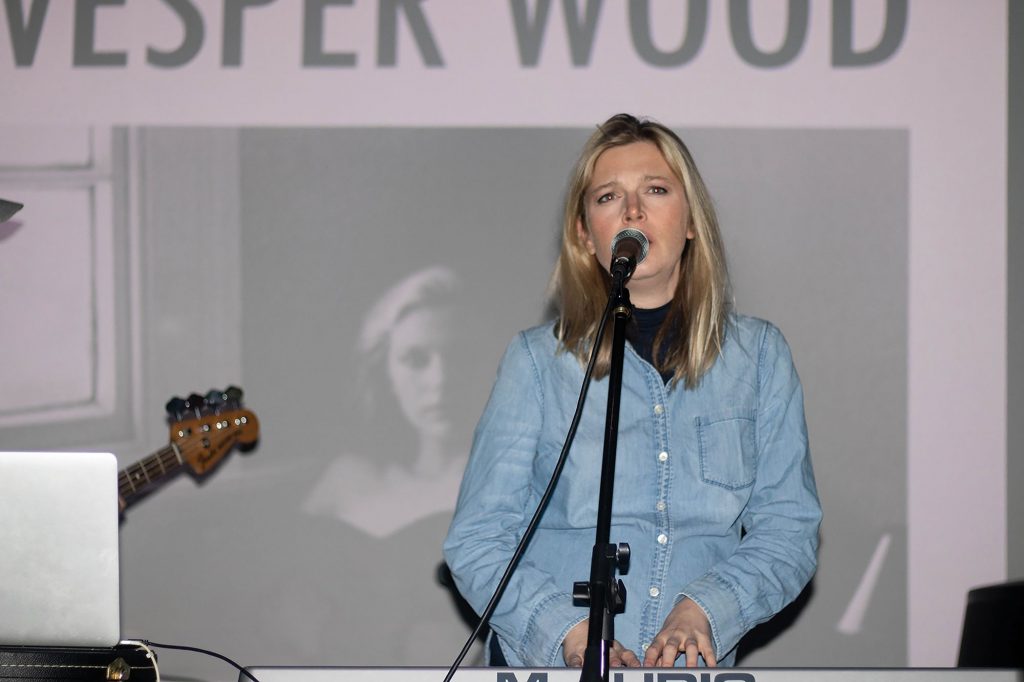 “It’s a much easier, more pure way for me to communicate,” Wood said. “Real life communication is sometimes a struggle for me.”

Wood, an artist skirting between indie and alternative, played an intimate, stripped-back show for no more than a few dozen people at the Pie Shop Bar, the upstairs venue of D.C.’s Dangerously Delicious Pies. Listeners causally bobbed their heads along to the rhythm of Wood’s set while sipping beers and munching on slices of pie.

At seven and a half months pregnant, Wood has had to switch up her pre-show ritual. “It used to be drinking a shot of bourbon,” Wood said. “Now, I guess it’s going to be meditating or something.”

With dimmed lighting and a simplistic setup of Wood on keyboards and an accompanying bassist, her stage presence was a tad quiet. There was minimal crowd interaction, aside from the occasional whispered “thank you” after she closed out a song.

But her voice picked up every time a new song began, as her niche style of deliberately restrained vocals exhibited her prowess as a performer.

Wood noted she doesn’t have a typical process in creating music.

“It’s kind of a blind groping,” Wood said. “I sit down and play around on the computer and the keyboard with various sounds, and out of a weird internal fog comes some melodies.”

She performed an array of songs from her new album, Instar. Highlights included the pervasively infectious beat of “The Wall” and the full display of her vocal range in her cover of Björk’s “Possibly Maybe.”

The best part of the performance, however, was the closing song, “Chain of Heat.” The palpable sense of momentum and the nuanced inflections of her voice made this the most intriguing number, one that could almost serve as the background music of an action film heist scene.

As part of the British electronic duo Kaleida, Wood has already toured and released a few projects. She hopes to release another Kaleida album toward the end of the year.

Outside of music, Wood works a day job as a forest commodities consultant, focusing on the sustainability of timber, palm oil and soya, among other things.

“It’s a big desire of mine to sort out our relationship with the environment,” Wood said, “which is obviously in pretty dire straits. I actually get kind of depressed about it because it just feels so impossible, but I’m still with it.”

Thoughtful and careful with her words and her music, Wood’s performance gave off an aura of wisdom and precision. Her focus was aimed solely at nailing every note of every song — she had the goal of doing her music justice, and nothing more. And when her final song ended, she simply unplugged her keyboard and began packing up her equipment.