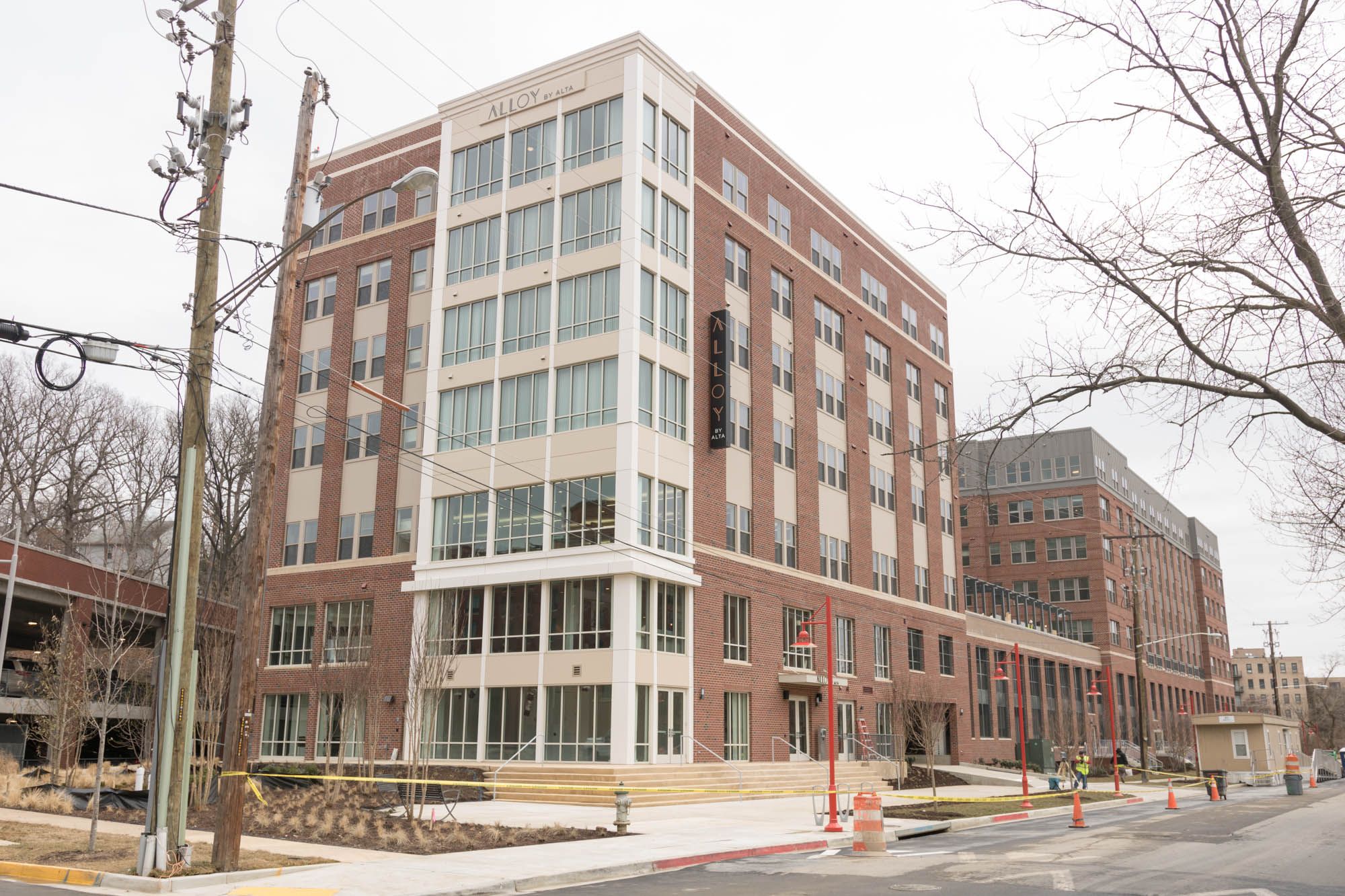 The new apartment building Alloy by Alta on Feb. 7, 2019. The complex is replacing what would have been Fuse 47. (Richard Moglen/The Diamondback)

When Cameron Bernhardt transferred from New York University to the University of Maryland a year and a half ago, he struggled to find a place to live.

Affordable housing close to the campus seemed almost nonexistent, and the junior computer science major’s transfer status made it hard to find on-campus housing, since priority is given to first-time freshmen and those who already live in dorms and want to return.

“[My roommate and I] found it really difficult to find a place that was open,” he said.

Despite finding a townhouse across from the University Club to live in this school year, Bernhardt remains frustrated by the lack of affordable housing in the area. And in the city, more expensive options keep on coming.

[Read more: A year after the Fuse 47 fire, a new apartment complex is being built in its place]

Wood Partners, an Atlanta-based property management company, is set to open its new building, Alloy by Alta, on Berwyn House Road this spring. It will replace Fuse 47, the complex that caught fire during construction in 2017. Wood Partners declined to comment for this story.

The complex will include 275 units with one- to three-bedroom floor plans, in addition to a 2,600-square-foot fitness center, “resort-style pool,” pet spa and bocce court.

But prices for rental spaces at Alloy by Alta — which start at $1,685 for one bedroom, $2,665 for two bedrooms and $3,550 for three bedrooms — are well above those offered at nearby buildings. Parkside at College Park has one- and two-bedroom condominiums for $950 and $1,900 a month, respectively. University Club, which is next to Alloy by Alta on Berwyn House Road, offers studio apartments for $1,239 and one-bedroom apartments for $1,349.

“[Alloy] seems pretty expensive, just based on the ranges for where I’ve been looking before,” Bernhardt said.

Some rooms in upscale student apartments on Route 1 — many of which rent by the bedroom, rather than the unit — are similar in price to Alloy by Alta. At The Varsity, one-bedroom apartments start at $1,674 a month, while the University View’s studio apartments fetch $1,659. But other units in those complexes are hundreds of dollars cheaper overall than Alloy by Alta.

Alloy by Alta is just one of multiple new development projects in the College Park midtown area. In 2017, Vigilante Coffee opened next to the View, and in 2018, the Cambria Hotel and Suites opened, equipped with an Orangetheory fitness studio. This spring, a German discount grocery chain, Lidl, is expected to complete construction on Route 1.

Eric Olson, executive director for the College Park City-University Partnership, said Alloy’s opening will help bring even more businesses to the area. He added that the new building would also make the city a more “walkable” community.

“It creates more people living in walking distance to campus,” said Olson. “It’s right along the bike trail, it’s not too far from the metro station, and it will bring more people who will spend their money at the local restaurants.”

And Ryan Chelton, the city’s economic development coordinator, said establishing a population that resides in College Park year-round will benefit the financial health of the city in the long-run.

“Right now, the businesses around the university really struggle while their customers go away over summer or winter breaks,” Chelton said.

Abby Ridgeway, a junior psychology major, lives in a house in Old Town. She said the rising housing prices in the area are worrisome.

“[Landlords] know that [students are] an easy market to take advantage of,” Ridgeway said. “People need somewhere to live, and they’re not just going to be homeless or sleep in their car.”

Ridgeway said the university is also responsible for burdening students with high rents.

In 2018, the university dealt with mold in multiple dorms across campus. But Ridgeway said the problems aren’t limited to campus housing, and that the city and the university should be held accountable and regulate rent prices.

“I think that everyone needs to do a better job providing safe housing, and affordable housing, and stop taking advantage of literally everybody,” Ridgeway said.

“Places like Alloy should stop treating students as literal cash cows,” Hermann said. “They are clearly not full of money, but are heavily in debt.”

In recent years, inflation and the rising cost of higher education has increased student loans nationwide for millennials. A Federal Reserve study found that student loan debt among 24- to 32-year-olds doubled from $5,000 in 2005 to $10,000 in 2014.

Like Hermann, Nicholas Hawkins, a senior atmospheric and oceanic science major, said rent costs for Alloy and other luxury apartment buildings are too high.

“College students don’t need luxury apartments and penthouses,” Hawkins said. “But it also makes me mad, because I know people are going to buy it still, because the demand for housing here is so high.”

Hawkins — who currently pays $700 a month for a house behind Fraternity Row — said students should stop buying expensive apartments. If people stop purchasing these apartments, demand will drop and some buildings will go out of business, he added.

“That would teach somebody a lesson,” Hawkins said.

Although Bernhardt still has concerns about rising housing costs in the city, Alloy’s opening has him hopeful for the future.

“Having more options will eventually drive the price down,” he said.

CORRECTION: A previous version of this story incorrectly referred to prices for individual rooms in the University View and The Varsity as being for apartment units as a whole. The article has been updated.