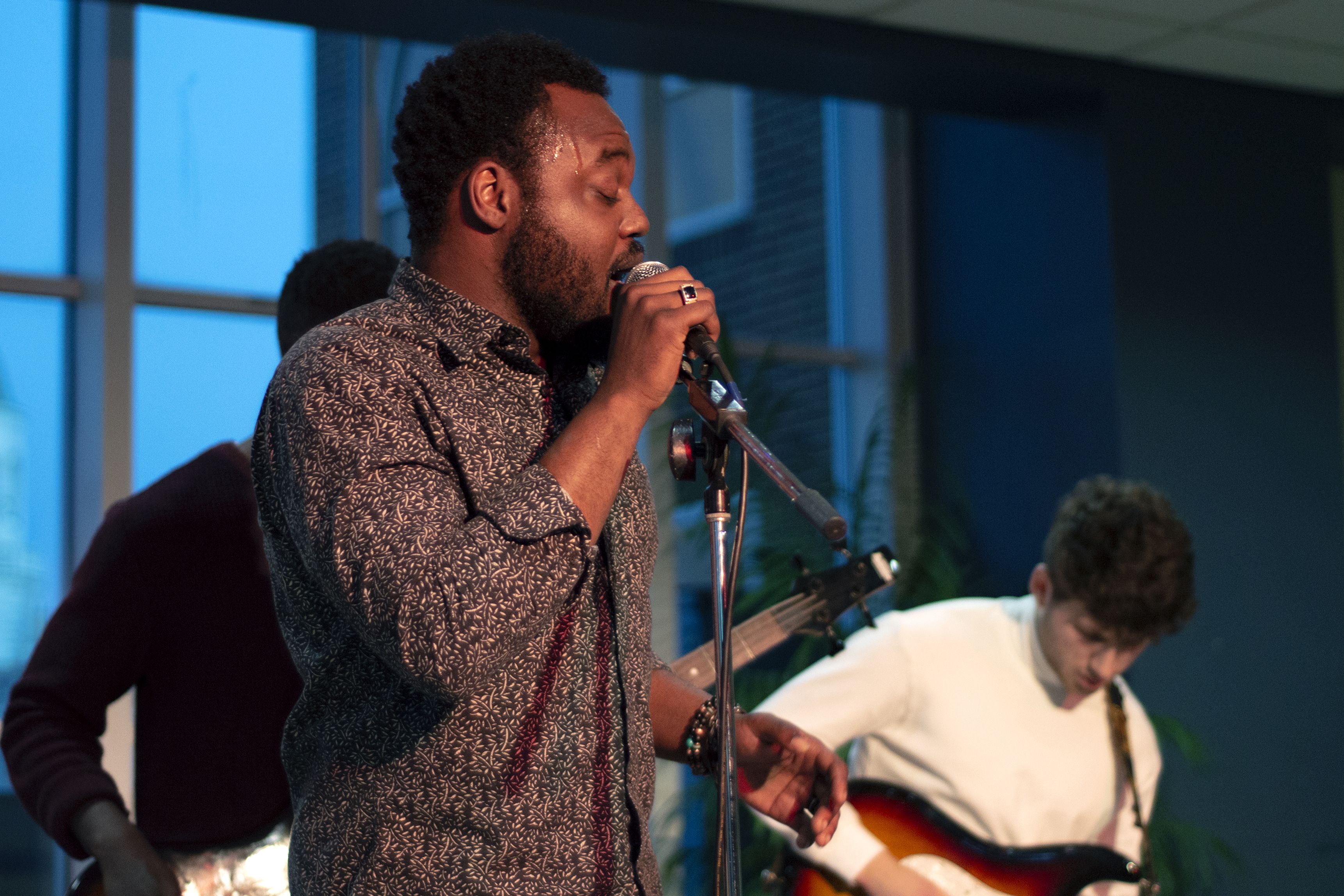 10issues performed at SEE's Battle of the Bands event in Stamp Student Union on March 12, 2019. The group will open for Art Attack XXXVI later this year (Susannah Outhier/For The Diamondback).

On a quiet Tuesday night at Stamp Student Union, three bands performed to the death.

Well, not really. But the stakes for the finalists in Battle of the Bands were basically that high: The winner would be the opening act of Art Attack 36.

Art Attack, a yearly concert hosted by Student Entertainment Events, is the University of Maryland’s biggest show of the year. It usually hosts big-name performers; if given the opening slot, bands could get a lot of exposure, and be able to perform in front of a very large audience. To be considered for Battle of the Bands, at least one member of the band has to be a student at the university.

The first act performed at the second night of the event was 10issues — a jazz, hip-hop and contemporary R&B group. Ten people were on stage, all playing different types of instruments; a few members were on vocals. A smooth trumpet and saxophone were present in their songs too. The band started off with “The Weekend” by SZA, “Best Part” by Daniel Caesar and a few other R&B songs.

10issues had a full sound, an impressive band and smooth vocals. Alexander Asifo, a senior journalism major, said the band’s friendship brought them there.

“We love playing together. We are all friends at the end of the day, but we also took the time to craft our skills on our own, so when we do come together we know how to be serious,” Asifo said.

Day of Leisure, the second band to perform, definitely had more of a down-to-Earth, crunchy vibe than 10issues. Four guys were on stage, wearing button downs with funky patterns — with some headband action going on as well. They were grooving on stage, playing originals, with some Queen and John Mayer tracks. With two guys on guitar, one on bass and one on the drums, Day of Leisure had a full sound.

Drummer Spencer Tritto, a freshman environmental science major, said the group has been together for around a year and a half; he described their genre as “classic-rock jam.” All that Day of Leisure wants to do is play music, Tritto said, which is why they wanted to compete in Battle of the Bands.

The last act, RMS, was different than the rest. Rohan Sridharan, who goes by his initials, rapped only original songs, that had some hip-hop influence. There was a DJ with him working on the beats and background.

Sridharan said the power of storytelling got him into rapping. From the performance, it was clear RMS loves to perform and tell a story.

“A lot of times [while performing] you have a bunch of people standing around you, super supportive, super energetic,” Sridharan said. “And it’s a dope vibe, it helps me forget about any type of performance anxiety.”

Judges picked the three acts, out of the initial six, for obvious reasons. Each has a passion for performing and playing music. Even though the competition was tough, there was only one winner of this battle: 10issues was selected to play in Art Attack XXXVI. Look out for tickets to Art Attack later in the semester.