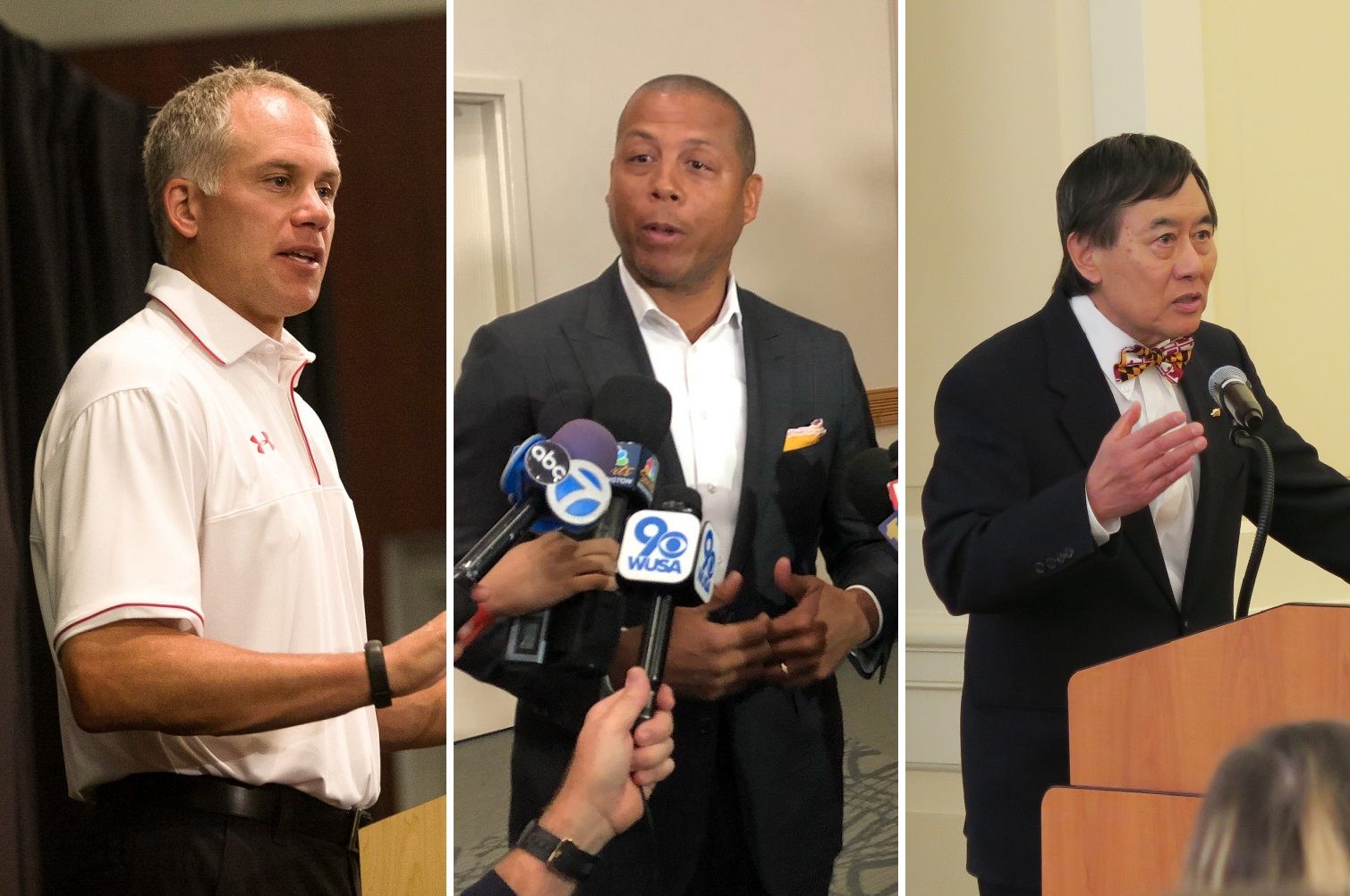 University of Maryland president Wallace Loh, athletic director Damon Evans and football coach DJ Durkin appeared in front of the Board of Regents on Friday as the body continues to discuss results of an investigation that found the trio shared responsibility for an abusive culture in Maryland football.

It was the board’s fourth meeting since the investigation concluded, but no announcements have been made regarding any personnel decisions. As Evans left the meeting, he told reporters, “We just have to wait to see what happens.”

Durkin was in the meeting for nearly an hour and did not respond to reporters’ questions as he left. Loh also was unavailable for questions, and the board did not make any statements Friday. The board’s meeting lasted about five hours.

In the aftermath of offensive lineman Jordan McNair’s death from heatstroke he suffered at a team workout, the university launched two external investigations — one into the medical care McNair received, and one into the culture of the program — that the board later assumed control of. The results of the first investigation were released last month, and The Washington Post obtained and released a copy of the second investigation Thursday.

On Thursday, after the Post published the 192-page document, regents chair James Brady said in a statement that the board “accepted both the findings and the recommendations” created by the eight-person commission, which was formed in August in response to an ESPN report that the program’s culture under Durkin was “toxic.”

“This excellent report provides the board and the people of Maryland a much more complete window into the culture of the football program and athletics department,” Brady said. “We will work with [this university] and every campus in the system to ensure that these recommendations are promptly implemented.”

While the report clarified that it would not label the program’s culture “toxic,” it did say Loh, Evans, Durkin and former athletic director Kevin Anderson all bear responsibility for creating an environment that allowed former strength and conditioning coach Rick Court to be abusive to players, and for failing to stop him from doing so.

The board was briefed on the findings of the investigation last Friday and met Tuesday, Thursday and Friday this week to discuss them. The board originally said that any decisions or recommendations were “expected” to be released within one week of the Tuesday meeting, but that was prior to the announcement of two additional meets.

The board also responded Friday to a claim from the law firm representing McNair’s family that an ouster of Loh would be motivated by prior politics rather than McNair’s death or the program’s culture, according to the Post.

In a letter to the board, Murphy, Falcon and Murphy — the Baltimore law firm hired by McNair’s family to pursue potential legal action — accused the regents of planning to fire Loh as punishment for publicly accepting “legal and moral” responsibility for McNair’s death, as well as other “unrelated” reasons, such as the renaming of Byrd Stadium three years ago.

“The McNair family will not rest until you accept legal and moral responsibility for the death of their son,” the letter reads, according to the Post.

In 2015, after student outcry and protests of the football stadium on campus being named for segregationist former Maryland coach Harry Clifton “Curley” Byrd, Loh helped lead the charge to change the name.

The board, which sets policy for all institutions in the University System of Maryland, voted in favor of the name change in December 2015. The final vote was 12-5. Brady was one of the dissenting votes, due to his belief that focusing on the past is misguided, according to a Diamondback article from the time.

“The test … is not whether you change the name of the stadium,” Brady said after the vote. “It’s about what we do every day on campus to make our campus as inclusive and as nondiscriminatory and as fair as it can possibly be.”

In a statement, a board spokesperson rebuked the firm’s accusations.

“Any suggestion or attempt to inject other, unrelated issues, is a disservice to the many talented and honest people involved in these investigations,” the statement read. “Every investigator, commission member and regent has been, and continues to be, determined to serve the university, the university system and the state of Maryland responsibly and transparently by uncovering and responding to issues related to Terps athletics and football.”