Advocates for people with disabilities marched almost 40 miles from Baltimore to D.C. 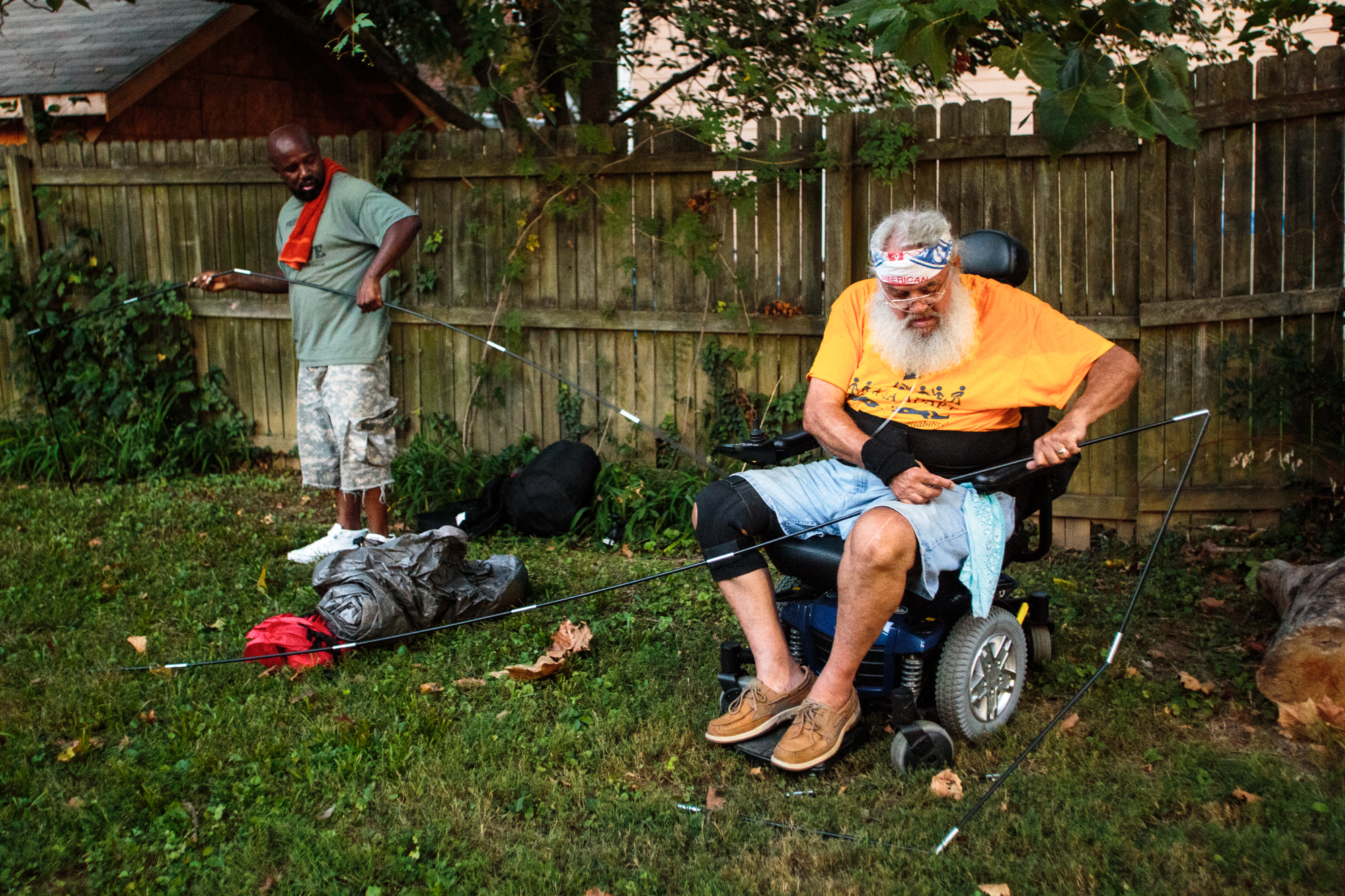 Behind Berwyn Baptist Church on Friday, there was a little city of tents. Two little girls played on the jungle gym. A dog walked freely around the area. A few men and women sat in a circle eating pizza, talking and laughing and oldies music played in the background. It could have been any group of friends on any Friday night.

These individuals, however, all had a purpose.

On Wednesday morning, they marched from McKeldin Square in Baltimore via Route 1 and finished at the National Mall in Washington Sunday afternoon to raise awareness for the disabled vote. According the National Center for Independent Living, 30 people participated in the march.

“The minority of [people with a] disability is the only minority that includes all others,” said John Sorenson, a member of ADAPT, a national grassroots organization that coordinates disability rights activists to engage in direct action. “Anyone from any race, any religion can become a member of the disability minority at any time.”

Nineteen percent of the U.S. population in 2010, or about 56.7 million people, had a disability, according to the U.S. Census Bureau. More than half of those people had a severe disability, which means that they require extensive support on more than one major life activity in order to participate in the integrated community, according to the Office of Head Start, which administers grants and oversees private for-profit and nonprofit agencies that provide the office’s services.

“We’re trying to let everybody know that our population is large enough that if we all get out and vote, we can sway an election,” Sorenson said.

Maryland’s ADAPT chapter organized the march, but because it is a national organization, some participants hailed from other states. Charlie Miller, a senior at Kennesaw State University in Georgia, attended the march as a participant with the national ADAPT organization.

“This march has been a blast,” Miller said. “It’s been truly a family setting the whole time.”

Similarly, Ericka Jones, a systems advocate, is part of Rochester ADAPT. She’s also the voting advocate at her center for independent living.

“It’s been tiring, but it’s so worth it because when you see these people stopping and trying to figure out what you’re doing and asking questions … now they know more about the disability vote than they did when you first got there,” Jones said.

Though spirits are high in the morning, the march gets hot quickly, said Crosby King, a Maryland ADAPT organizer, because some people have to push manual wheelchairs and some walk.

Joanie Bacashihua, a participant on the march, said she thinks some people get annoyed with them interrupting traffic. The group was accompanied by a police escort along the way.

“But on the other hand, I think we’re being noticed and that makes it all worthwhile,” she said, and described it as a “joyful experience.”

And the group has received plenty of support.

“Onlookers clapping and supporting us, cars honking at us and the support we’ve seen on social media has been tremendous,” King said. Some participants on the march even start chants along the way.

The group blogged and posted on Facebook about the experience. King said he can’t even look at his Facebook app anymore because of all the likes and comments he’s been getting.

In addition to empowering the disabled vote, the group is also pushing for the Disability Integration Act, which King calls “the most significant legislation since the ’80s.” If passed, this civil rights legislation introduced by New York Sen. Chuck Schumer, would address how people who need Long Term Services and Supports are forced into institutions and losing their basic civil rights, according to ADAPT.

“We have civil rights just like every other American,” said Patrick McMurtray, board president of the Freedom Center, an organization that assists people with disabilities in independent living. “If given the opportunity, we can live successful, productive, independent, self-directed lives and be an asset to others and to our community.”