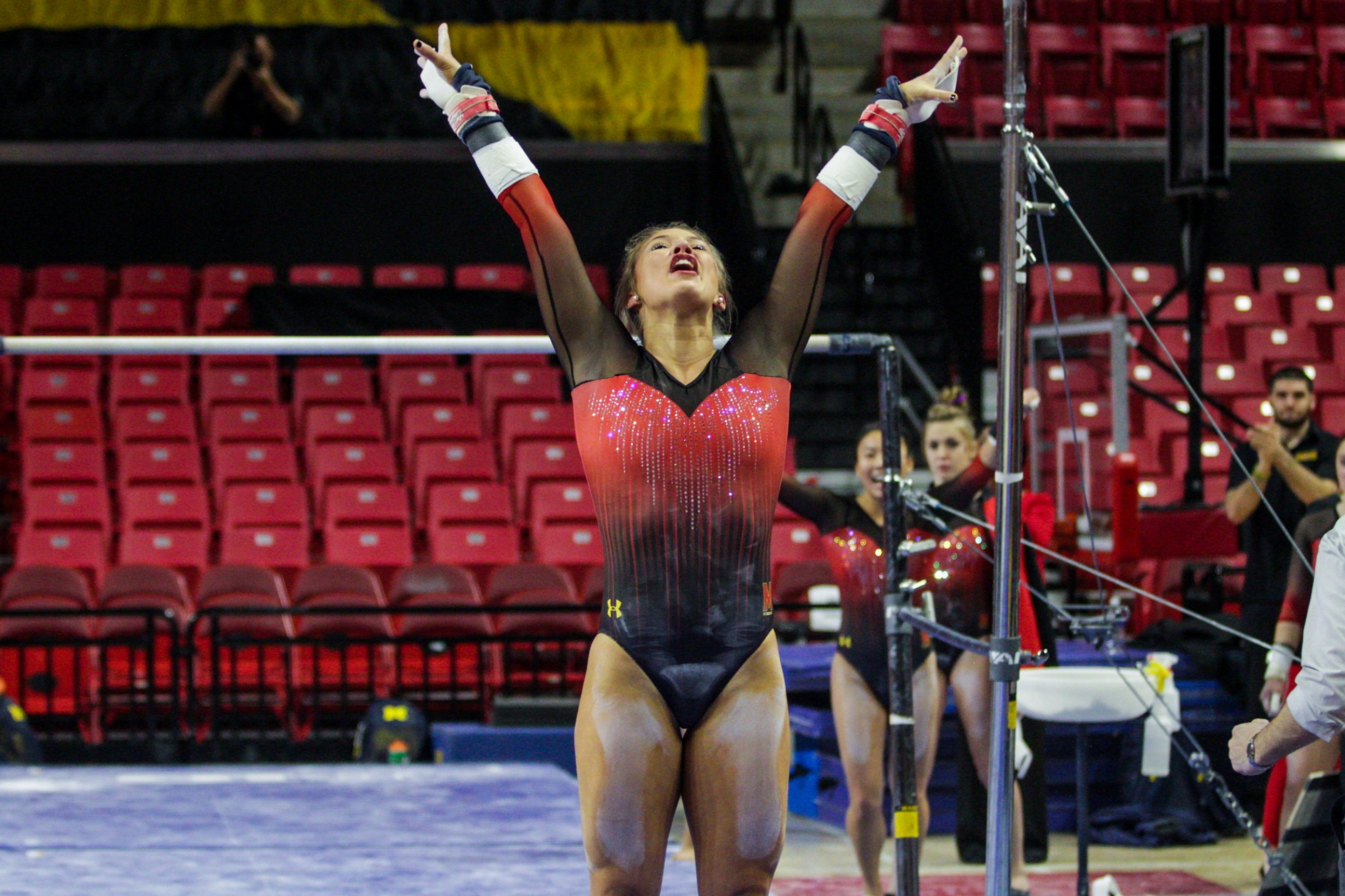 Evelyn Nee’s throat hurt, her body ached and she was exhausted after a weeklong bout with flu-like symptoms. She had trouble sleeping the week before the Maryland gymnastics team’s quad meet at Rutgers on Saturday because she couldn’t stop coughing.

Still, the junior went through warm-ups thinking she was well enough to perform. After all, she had competed while sick several times in high school.

But in the opening rotation, Nee couldn’t finish her bar routine in Piscataway, New Jersey, earning a 7.325. While the Terps were able to drop her score from the team total, Head Coach Brett Nelligan praised Nee for her willingness to compete through her sickness.

“I’m proud of her,” Nelligan said. “She told me she could do it, and when an athlete tells you they can do it, you believe them. She fell in the middle of the routine and was really out of it, so I just told her to [stop.]”

Several Terps called their meet Feb. 5 against Michigan a fresh start after earning a season-high 195.625, but Nelligan wasn’t sure the momentum would continue Saturday with half his roster ailing throughout last week.

But the eighth-year coach said the Terps were determined not to let the adversity affect their performance. That hardship also included the conditions in Rutgers’ gym, which Nelligan estimated held about 600 people, many of them close enough to touch the gymnasts.

“As soon as you walk into the gym, it’s like a million degrees,” freshman Alecia Farina said.

“I couldn’t even hear myself think on beam,” senior Sarah Faller added. “I said, ‘If we have to fight for this, then let’s fight.'”

The Terps tried to follow their captain’s mindset after Nee’s early miss.

Nelligan has preached for mental steadiness throughout the season, so when Farina had to follow Nee’s bar routine, she relied on the advice.

“Right before my bar routine, I was like ‘OK, I really need to focus on what Brett told me,'” Farina said. “I remember I was so nervous before because we needed my score on bars to finish well. In my head, I was breathing deeply and thinking ‘One skill at a time.'”

Farina anchored with a 9.80 and the Terps finished the first rotation in second with a 48.675.

“This is why we’re a team,” Farina told Nee. “This is why we have more than six people on the team because [Nee] had the rest of us to back her up.”

“That was really comforting for her to tell me that,” Nee said.

The Terps returned to College Park at 1 a.m. Sunday, and they had little time to recuperate before that afternoon’s practice. Faller admitted it’s difficult to fully heal during the season with few days off.

Still, Nelligan expects that Nee will recover to perform next weekend. She practiced Sunday but welcomed Monday’s off day.

“It says a lot about their character,” Nelligan said. “They say they’re a tribe, and I think they did it for each other. Yeah, we had a lot going against us but they had put in the work this whole first semester, so I knew they could rely on that.”