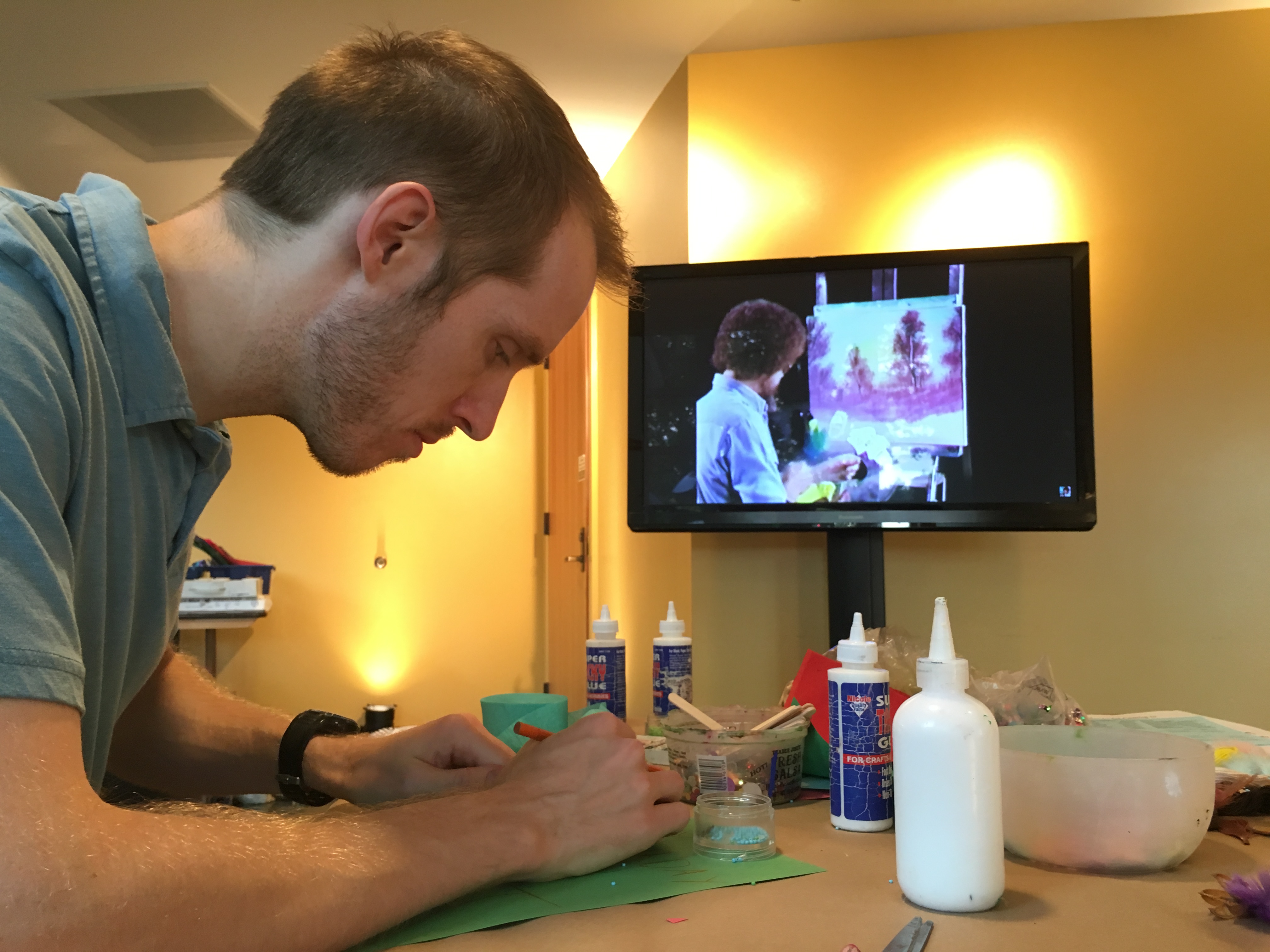 Up the stairs and around the corner of the Clarice Smith Performing Arts Center, Bob Ross painted. Over and over again he stroked into existence pine trees and overcast skies. He stayed until late Friday night, and returned Saturday to the crowd’s delight. Inside two giant television screens, Bob Ross painted as if inspiration radiated from his puffy, brown perm.

More than a hundred people got a taste of the master artist during NextNOW’s “Crafting With Bob Ross.”

“I thought we were going to be painting some abstract trees and stuff so I came,” he said over his interpretive glue painting. “But I’m still having a great time.”

Goldberg had reason to be disappointed — there were no easels in sight, no paintbrushes or palates. The mess-making was confined to four paper-covered tables spread with glue, beads, yarn and glitter.

“Note it’s crafting, it’s not painting, with Bob Ross — we don’t have those resources,” said junior Megan May. The art history major works for the Art and Learning Center in Stamp, which put on the event.

“I’m happy with any crafts,” freshman government and politics major Meredith Riley said as she decorated construction paper with cutouts of pumpkins. “I’ve already started decorating our dorm for Halloween so I am making more things to hang on our door.”

Nearby, four students laughed and joked as senior Gina Anzalone drew a smiley face and sprinkled glitter on her page. She carefully added seashells and a little heart gem. One of her friends teased it was a fourth grade art project.

“[Bob Ross] definitely inspired me with some of his nature paintings even though mine doesn’t look like his, but I tried,” the psychology major said.

“The Joy of Painting” rolled in the background as student’s focused on their own art. May said students had the option to follow along with Ross’s expertise, but most choose a more free-form route. Downstairs, there were trumpets and food trucks, performers and exhibits. But the atmosphere in the little corner of The Clarice made everyone want to stay.

“I love Bob Ross. He’s just so calming, I love him,” Riley said.

May said she noticed three consecutive feelings toward her event. First, people were understandably excited to see Bob Ross, followed by instant disappointment at the lack of oil paint and easels.

And thirdly, May said, “Relaxation and happiness because they realized they were able to create a craft they loved.”