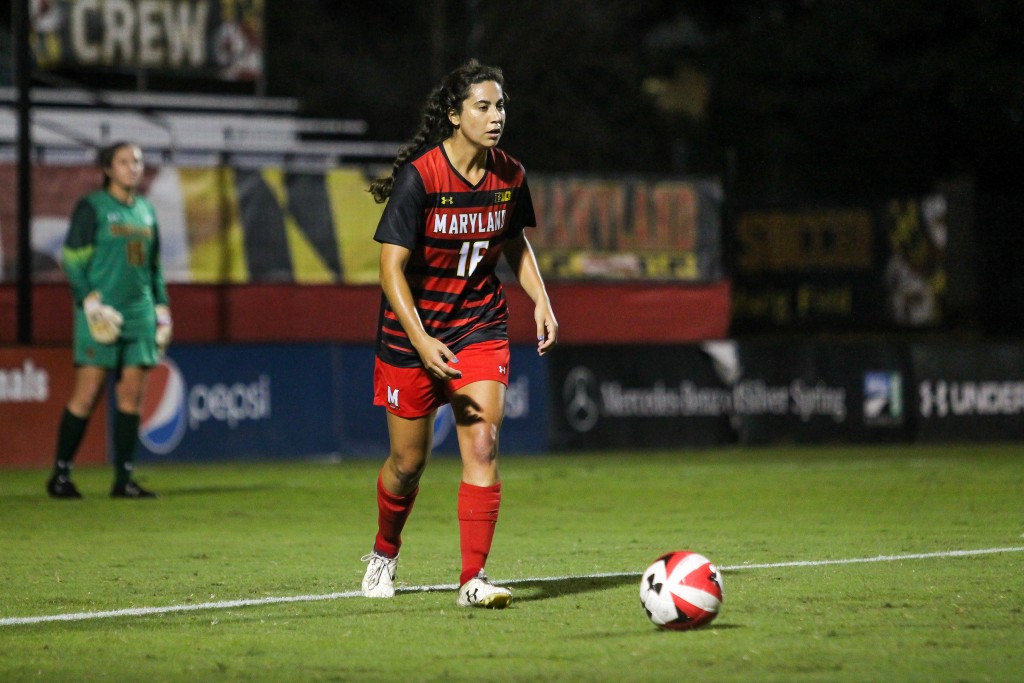 Maryland women’s soccer midfielder Hope Gouterman forgot about her prophetic third-grade assignment until she was a senior in high school.

That’s when her mom showed her the letter she addressed to her future self, posing questions about what life was like as a high school graduate.

When the Terps play Michigan State on Saturday, Gouterman will celebrate senior night with the program she once dreamed of joining. She and five other Terps will be honored for their contributions.

Gouterman has been a key figure for the Terps (7-7-2, 1-7-1 Big Ten) this season. The team captain has played more than 100 more minutes than any other Maryland player and is the only one who has started all 16 contests.

Freshman midfielder Hope Lewandoski said she looks up to Gouterman, citing her approach to the “soccer lifestyle” as an admirable asset. Her work ethic is something Lewandoski tries to emulate.

Coach Ray Leone called Gouterman an emotional player who brings passion to the field, a trait inspired by her connection to Maryland from a young age.

“It’s an important thing for someone like that to show how much she loves the ‘Terp for life’ type of attitude,” Leone said. “Hope is definitely that person. It’s a cool thing.”

Gouterman and her fellow seniors have endured more coaching changes than winning seasons in College Park, sticking out the transition from former coach Jonathan Morgan to Leone.

However, a victory over the Spartans would ensure at least a .500 finish in 2017.

Leone appreciates the seniors for staying with Maryland to help rebuild the program.

“I’m forever grateful to them because, without them, we would have been starting the team from absolute zero,” Leone said. “I’m proud of them. It’s been a pleasure to coach them. They want it so bad for the program.”

Forwards Chelsea Jackson and Natasha Ntone-Kouo, midfielders Madison Turner and Kate Waters, and defender Zoe Clark will depart the Terps with Gouterman after this season.

“A lot of the people that are here for senior night stuck with it through a really tough time,” Turner said. “That definitely means a lot.”

Jackson remains tied for the team lead in goals this year despite suffering a season-ending injury in Maryland’s eighth game. Turner is level with her atop the score sheet. Waters notched the winning goal in the Terps’ only Big Ten victory this season, while Clark, a graduate transfer, has been a steady contributor on defense.

In Gouterman’s mind, the seniors have achieved their goal at Maryland through the ups and downs, supplementing the one she set for herself all the way back in third grade, which was just to be there.

“The main theme for all the seniors was leaving [our team] better than it started,” Gouterman said. “Whether it’s on or off the field, a culture change or chemistry building, as long as I can leave and say that I made a positive impact on something, that’s the most I can say and I can be proud of that.