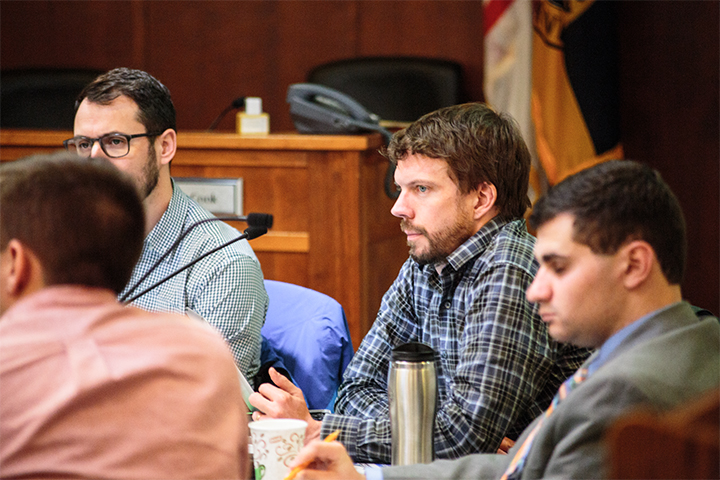 By Alex Carolan and Laura Spitalniak

McCabe, a Calvert Hills resident, said she and some of her colleagues joined Saturday’s protests at the airport as part of a welcome home to refugees and travelers who were coming back to the country. On the day of the Women’s March on Washington, she’d also hosted a morning kickoff that 40 city residents attended.

These stands of solidarity, she said, are what College Park is all about.

“College Park has a long tradition of really standing together as a community,” McCabe said. “It’s not my place to issue directives for what the city should do, but I think it would be fantastic … that the city sends the message that it stands with its immigrant communities, that it’s not going to be divided, and frankly, that we’re not going to stand for the marginalization of people that are a part of our community.”

A few residents have written to city Mayor Patrick Wojahn about their support for College Park as a sanctuary city, Wojahn said. Students at this university affected by the orders have also been reaching out to Wojahn for assistance, he said.

“When you bar people from entire countries from coming into the United States who may have student visas, that is certainly going to impact some people at the university,” he said.

The immigration ban affects about 350 university members, university President Wallace Loh wrote in a statement to the campus community on Tuesday. Security officials detained Mohammadi, a junior public health science major and green card holder from Iran, for five hours after her flight home from Turkey. And engineering doctoral student Abubakr Suliman Eltayeb Mohamed Hamid, who works and lives in the Language House as an Arabic teacher, is unable to return to the U.S. after visiting his home country of Sudan this winter break.

Wojahn said the College Park City Council will likely “take action in support of maintaining the Deferred Action for Childhood Arrivals program ” on Feb. 14, based on a recommendation from the city’s Education Advisory Committee.

DACA protects undocumented immigrants who came to the U.S. before the age of 16 — and who meet other guidelines — from deportation, and gives them permission to work and study for two-year intervals. The program also allows eligible students to pay in-state tuition at public colleges and universities. There were 113 undergraduate and graduate students receiving DACA at this university as of fall 2016, and 20 are covered under this state’s DREAM Act.

“Given the large immigrant population in College Park … I would like to see the city council take that step to support the DACA program,” Wojahn said.

Looking forward, Wojahn said the council also plans on addressing other immigration policy. This city, along with Prince George’s County, has already said they will continue to uphold sanctuary city policies despite Trump’s executive order.

For McCabe, such executive orders conflict with her perception of U.S. values.

“The reason that I am so involved in it is it’s just so antithetical to what the U.S. constitution means,” she said. “I am so bothered by it. Specifically speaking about the immigration one.”

Though city resident and university alumnus James Nealis said he agrees with protests that back refugees and immigrants, he added that he views the immigration ban as a precaution for the country’s safety rather than a violation of rights.

“We need to be cautious,” Nealis said. “I understand the concern that government officials have about … who comes into our country.”

However, Nealis said he opposes green card holders not being allowed back into the country.

“[They] have already been admitted, they’ve been researched and they’ve been granted permission to come here to work or be a student … even if they haven’t been given full citizenship,” he said.

Overall, this city is a community that comes together “on what is right,” McCabe said.