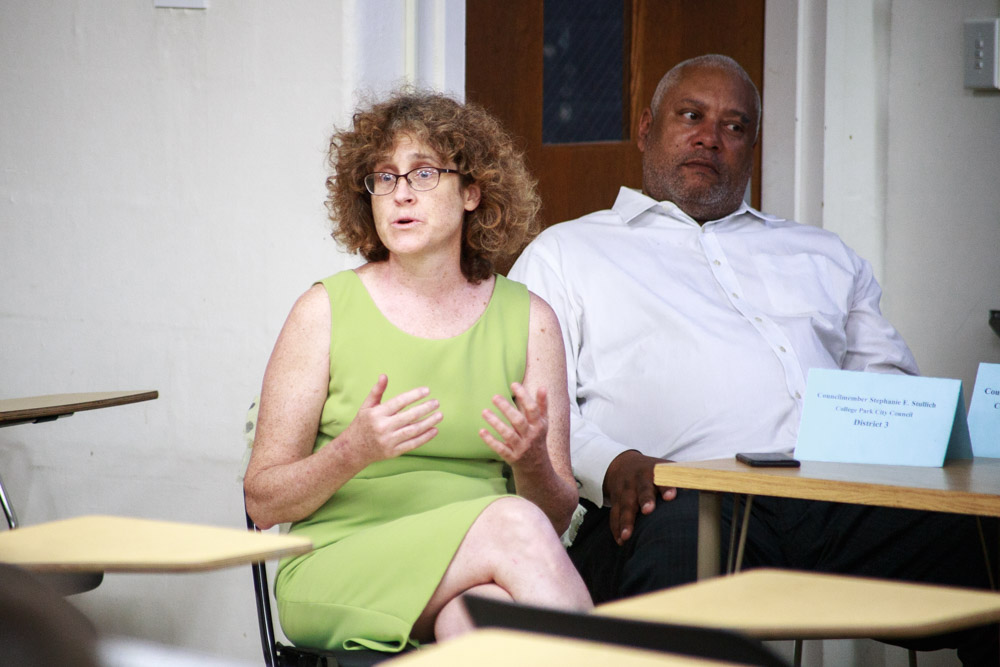 The College Park City Council and the University of Maryland’s SGA addressed the division between the city and this university at a town hall Monday night.

About 45 students and faculty, along with the city’s eight council members and Mayor Patrick Wojahn, gathered in the public health school for the event. The council answered questions from the Student Government Association about the city and its relationship with this university at what was the first town hall between the two in recent memory, said Chris Keosian, the SGA’s director of city affairs.

“The more dialogue that you create between students and council members and residents, the faster the city will feel a sense of oneness,” said Keosian, a junior government and politics major and the event’s moderator. “We are a little bit divided right now, and we need to not be.”

Junior economics and government and politics major A.J. Pruitt, SGA’s vice president of student affairs, asked the council what the organization can do to bridge the gap between city residents and students.

“What we’re doing today,” District 3 Councilman Robert Day said. “The fact that we’re sitting in here today, having this discussion with you, is another huge step.”

If the SGA keeps holding events like town halls, it will help lessen the distance between them, he added.

“Unless you come out and meet some of the neighbors out there, you’re not going to really know what College Park is all about,” she added. “You’re going to know about this one area.”

Keosian also voiced his perception that the city council itself can sometimes be split.

“We ultimately work together … and it’s important for us to recognize that commonality,” Wojahn said.

District 1 Councilman Fazlul Kabir said he would rather label the different opinions as “diversity.”

Kabir cited “a good fight” he had with Day at a March 28 council meeting about a joint child care facility scheduled to be built on Calvert Road, where he introduced a failed amendment to explore other options for the site.

“We do fight at the meetings, and those are good fights,” Kabir said, adding most of the council’s decisions are unanimous.

Other topics discussed at the town hall included the council’s split opinions regarding the on-campus Interfraternity Council tailgate, revitalization and gentrification, recycling at bars and University Police’s shared jurisdiction over residential communities.

While District 1 Councilwoman Christine Nagle and Kabir questioned the city’s role in funding the IFC PHA tailgate, others, such as District 2 Councilman P.J. Brennan, said it helps create the vision of a cohesive College Park.

CORRECTION: Due to a reporting error, a previous version of this story incorrectly referred to this university’s on-campus tailgate as the IFC tailgate. It is known as the IFC PHA tailgate. This story has been updated.