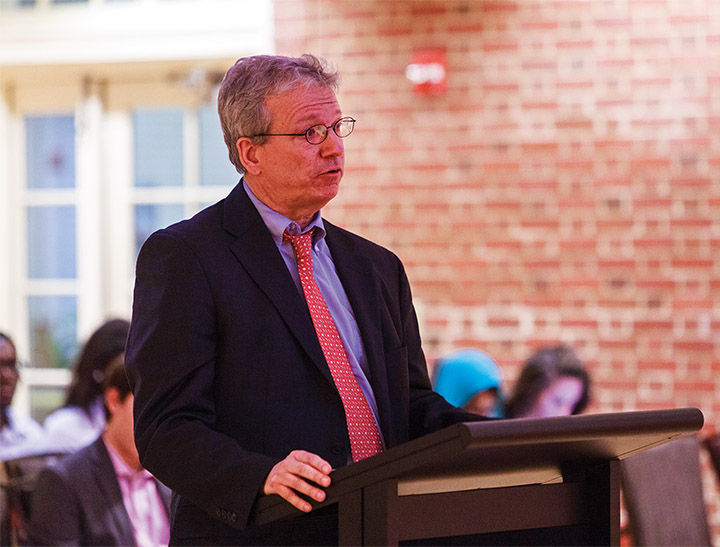 Andy Fellows’ parents met in College Park while they were undergraduates at the University of Maryland.

They raised their son only six miles away in Silver Spring, and Fellows was often on the campus to watch the 1960s-era Terrapins men’s basketball team compete under his father, former head coach Frank Fellows.

So when he decided to attend this university for graduate school in 1991, Fellows had no illusions about College Park. He knew it didn’t have a reputation as a great college town, but he thought it had potential to become one.

Fellows, who stepped down last week after three terms as College Park’s mayor, has spent more than 20 years working to improve the city, and he doesn’t plan to stop now that he no longer holds its highest elected seat.

“College Park really is a good college town, and we have a great plan to become a great college town,” Fellows said during last week’s inauguration ceremony for Mayor Patrick Wojahn and the city’s council members. “I’m proud to say I played a small part in that.”

“We’ll look back 20 or 30 years from now and say the years when he was mayor was the turning point in putting College Park on the track to become a real world-class city,” Rosapepe said. “It’s really almost a historic period.”

The Landmark apartments and the in-progress Hotel at the University of Maryland are perhaps the most visible signs of the city’s “unprecedented economic boom,” Fellows said, with $540 million in active development, according to the city’s 2014 economic development report.

In addition to the new developments changing the face of Route 1, the city’s charter has been updated, too. It now includes a provision stating that the city will not discriminate based on religion, gender or sexual orientation, among other bases, with regards to employment, housing and public accommodation.

That’s one of the changes Fellows said he is most proud of from his time in office.

When Fellows took office in 2009, he pledged to increase collaboration with the university on public safety, housing and development, education, transportation and sustainability. He can rattle off numerous ways each area has seen improvements.

To improve safety, the city implemented speed cameras, lowered the speed limit and built a median barrier after a spate of pedestrian accidents on Route 1, including three pedestrian deaths in 2014. It invested more than $6 million in a supplemental police force to work alongside Prince George’s County Police and University Police, Fellows said, and in 2013, the university’s Code of Student Conduct was expanded to apply off the campus.

Fellows’ tenure also saw the creation of the Neighborhood Quality of Life Committee, which deals with problems between long-term residents and students and the opening of new luxury apartment buildings like Domain College Park and Landmark, with more on the way.

The city and the university worked to found College Park Academy, a charter school that scored above state and county averages in all categories of the Maryland School Assessment last year.

With plans for the Purple Line light rail on track — following support from this university and the City Council — transportation is poised to improve. And this year, the council voted to support a comprehensive City Operations Sustainability Plan.

The city and this university launched their Greater College Park vision last summer — an initiative encompassing a series of announcements such as the creation of the Maryland International Incubator and a homeownership program to incentivize university employees to live in the city.

Fellows is “easy to talk to and listens well,” said university President Wallace Loh. “We’ve been able to do many things together as a result. His involvement and very open style of communication has been essential to it.”

Fellows doesn’t take credit for many of the initiatives that came about in the last six years. Instead, he names the council members and city staffers responsible for making them happen. As mayor, he said, one of his primary goals was enabling others to take on leadership roles.

“I wanted to not make it about me as mayor, but to make it about the council,” Fellows said. “I think I did a pretty good job empowering council members to be as good of leaders as they could be. I think we get more accomplished if we’re sharing credit and new leadership is developed.”

That mission is part of why Fellows said he’s known as a “pretty quiet elected official.” After his 14-minute speech at last week’s inauguration ceremony, newly sworn-in District 1 Councilwoman Christine Nagle joked it was the most she had ever heard him speak.

“It’s my observation that we can accomplish more with the mayor saying less,” Fellows said.

His style comes in sharp contrast to former Mayor Stephen Brayman, who was “aggressive,” “[had] strong opinions” and was called a “bully” by one councilwoman, according to a 2009 Diamondback article.

But Fellows’ tenure was not without disagreement. The council voted to rebuild City Hall in its current location downtown, ending a decades-long discussion in which residents expressed interest in relocating the building to a more central spot.

“The location of the City Council should serve all the citizens — more than half of them live in the north part, and I simply do not think it is fair to have them drive all the way down here to do city business when other locations are available,” Arthur Eaton, vice president of the North College Park Citizens Association, told The Diamondback in 2014.

The council also voted 5-3 to lower the minimum age to run for College Park office to 18, which Fellows said created a sense of division.

Wojahn said he learned from both mayors he served under. The biggest lesson Fellows taught him is how to “build consensus through patience and listening and allowing others to step forward and take initiative,” he said.

Fellows endorsed Wojahn for his seat after he decided that six years “was about right” to serve as the city’s mayor. Following “lots of 14- to 16-hour days,” he wants to focus more of his time on his full-time job as a program manager at this university’s Environmental Finance Center.

“He has an understanding and ability to relate to and engage, not just leaders and elected officials, but also citizens,” said EFC Director Daniel Nees. “He’s been very effective.”

Fellows will also be working as part of Hillary Clinton’s State Leadership Council for Maryland.