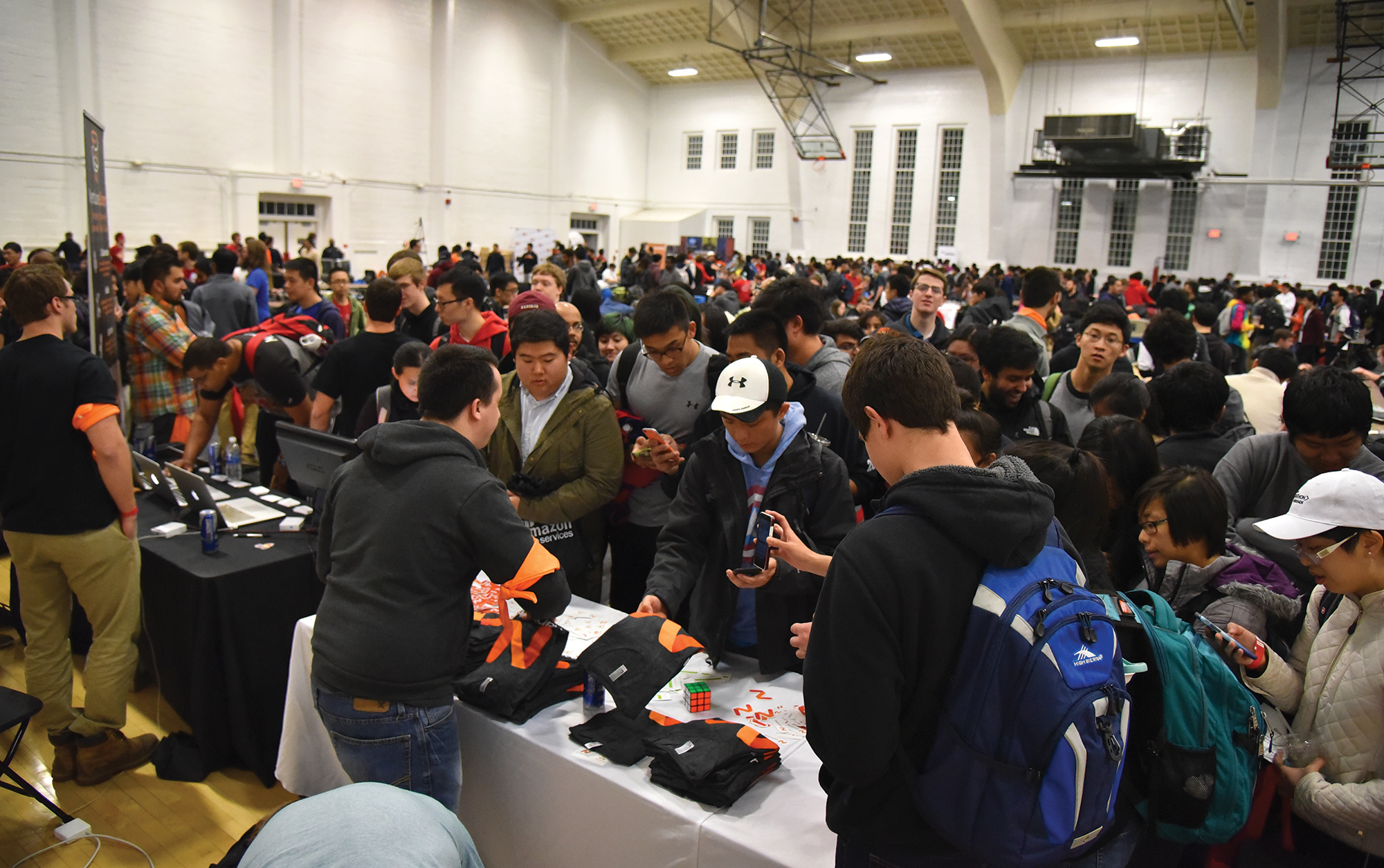 Students check out vendor tables at Bitcamp on April 8, 2016 in Reckord Armory.

Denver Phillips and his Bitcamp teammates struggled to come up with a name for their new app; they brainstormed words related to College Park and came up with “turtles,” which turned into “toitles.”

Phillips, along with his teammates, worked over a 36-hour hacking period between April 8 and April 10 during the University of Maryland’s Bitcamp, an annual hackathon in which students from around the country design and create their own unique tech projects. As the contest closed, the group submitted an app to serve students and residents living in College Park.

This contest’s purpose was to create an app to benefit the city, and Mayor Patrick Wojahn and Cole Holocker, the City Council’s student liaison, reviewed about two dozen submissions.

This was the first year the city has held a contest at Bitcamp, and Wojahn said he was “pretty open-minded and open to the ingenuity of the students” and that he looked forward to potentially being involved in future years.

Wojahn and Holocker selected CP Toitles, pronounced “toy-tulls,” as the winner April 10, which earned the creators $1,000 to market and develop the app, as well as the title of “Best Hack to Serve College Park.”

“When we heard we had won, we were just so shocked and overjoyed,” said Michael Alper, a freshman computer science and psychology major. “We were pretty modest, so it came as a huge surprise.”

The CP Toitles app allows users to see nearby community events, such as picnics, fundraisers or study sessions, through dropped pins on a map. By clicking on a pin, a description of the event appears along with a location. The app also features maps to help guide users through the streets of College Park.

“While someone in Canada could download the app, we have it set to the locations at College Park, so it wouldn’t really be useful to them,” Phillips said.

Users can also register and advertise events on the app for free, according to the CP Toitles website.

Wojahn said that while the submissions were varied, CP Toitles focused on the area and would benefit residents and the community.

“We were looking for something geared toward College Park,” he said, “and CP Toitles did that. There’s a lot of resources in College Park that people don’t necessarily know about, and this highlights the different events and other amazing things we have going on.”

Using the cash prize, these students will continue to develop and market the app, which is currently in its prototype phase. Once the app is available, it will likely be downloadable for free, Phillips said.

The group is still in touch with the mayor, Alper said, as they have an opportunity to present their app to the City Council. The team plans to ask for more funding and assistance in planning future development of the app, Phillips said.