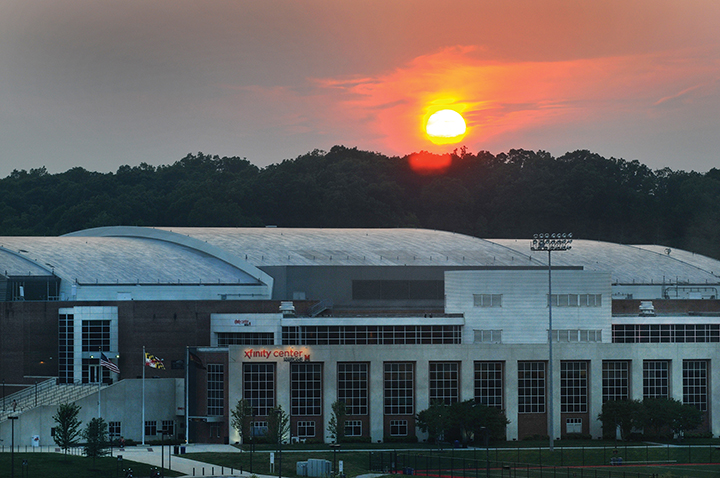 Alcohol will now be sold at Maryland sporting events such as the basketball games in Xfinity Center. This may impact the way that UMPD polices games.

Xfinity Center may see a new parking lot in the nearby forested area if a plan from the University of Maryland’s DOTS is approved by campus organizations and state environmental authorities.

The proposal — part of a larger plan to maximize parking space in wake of upcoming campus construction — would involve clearing the forest for 1,000 parking spots just north of the Shuttle UM complex, said Department of Transportation Services Director David Allen.

Even with preventing freshmen and sophomore residents from parking on the campus starting next year, there won’t be enough parking spots for the fall 2017 semester, Allen noted. But building a parking garage from scratch is out of the question, he said, because it would easily triple the parking fee for everyone and would cost about $110 million — a cost the university isn’t capable of taking on.

The surface parking lot, in comparison, would cost between $8 million and $9 million to construct, Allen said, but there would be no increased fee involved with it. He said DOTS has been paying the mortgage for Stadium Drive Garage for 20 years now, and it’s almost finished. Therefore, DOTS could take the money that they always pay toward that mortgage and put it toward paying off a loan for the new parking lot.

“We already have the payment ready, so it would not cost anyone anything more for this new parking lot,” Allen said.

The proposed lot would take out the wooded area north of the Shuttle UM complex. (Photo courtesy of UMD Campus Map)

The motion for this parking lot has to go through various campus organizations, such as the Division of Student Affairs, the Campus Transportation Advisory Committee and Facilities Management. DOTS is in the process of working through these approval stages, Allen said. If every campus group approved the proposal, it would move to the state’s Environment Department to get permits.

“We have gone through that first stage [of approval],” he said. “The Division of Student Affairs has approved that site for parking. … We showed [the plan] to CTAC, but have not officially proposed it to them yet. We just wanted to let them know what’s on our radar.” There is no current timetable for when final approval could be expected.

Allen added the transportation department has also presented the idea to the Residence Hall Association, Student Government Association and Graduate Student Government, but noted that some of the details — such as who will use the parking lot — are not figured out yet.

Samantha Bingaman, an RHA member, said the association will consider a resolution about the parking lot during one of its first meetings after Thanksgiving break. So far, the idea has only been presented to their Transportation Advisory Committee.

“It’s my understanding that we do have a resolution coming to the floor soon, but I’m not sure if that’s going to be pro-parking lot or anti-parking lot yet,” the senior environmental science and policy major said. “But we will be discussing the issue.”

The RHA has recently been in collaboration with DOTS on potential solutions to combat decreased parking, including using a park-and-ride lot in South Laurel about 13 miles away for underclassmen, according to a November Diamondback article.

Speaking apart from RHA as a student and member of the campus, Bingaman said the proposal for the lot near Xfinity does not necessarily align with some of the university’s plans to be a more sustainable campus.

“We’ve made a goal to cut our carbon emissions, so this parking lot is not very consistent with those goals,” she said, referencing this university’s 2009 Climate Action Plan to cut 50 percent of its emissions by 2020. “It’s encouraging driving as well as getting rid of a forest in that area.”

In addition to hindering the university’s sustainability goals, Bingaman said she was concerned about the long-term effects of DOTS only looking at a short-term solution to parking.

“This is a classic environment versus economy dilemma, and too often, especially with the new federal administration change, we’re about to see the environment get put on the backburner a lot,” she said.

Allen said DOTS will take feedback about the environmental concerns into consideration.

“If for some reason SGA [or one of the other two groups] says, ‘The environmental impact is too much, we should not build this,’ … we probably wouldn’t, but I still would have to say, ‘Okay, then what?'” he said.

A.J. Pruitt, the SGA student affairs vice president, said Allen presented the idea to CTAC on Thursday, adding that he has been trying to get more information about it ever since then.

“What’s important to note is that this is maybe even a step before preliminary,” said Pruitt, a junior government and politics and economics major who sits on the committee. “The job of David Allen and the vice president of student affairs office has been to identify places … or plans for additional parking, because we’ve run out of parking. This has sort of come to the forefront as one of those options.”

Although Pruitt acknowledged the environmental concern as well as the benefits that could come from additional parking spots, he saw this debate as a way for students to get involved in a project that might affect them.

“There are a lot of steps that this proposed lot still has to go through,” he said, “so I think it’s an opportunity for students who don’t think that this is the best option … to speak up and be part of the process.”