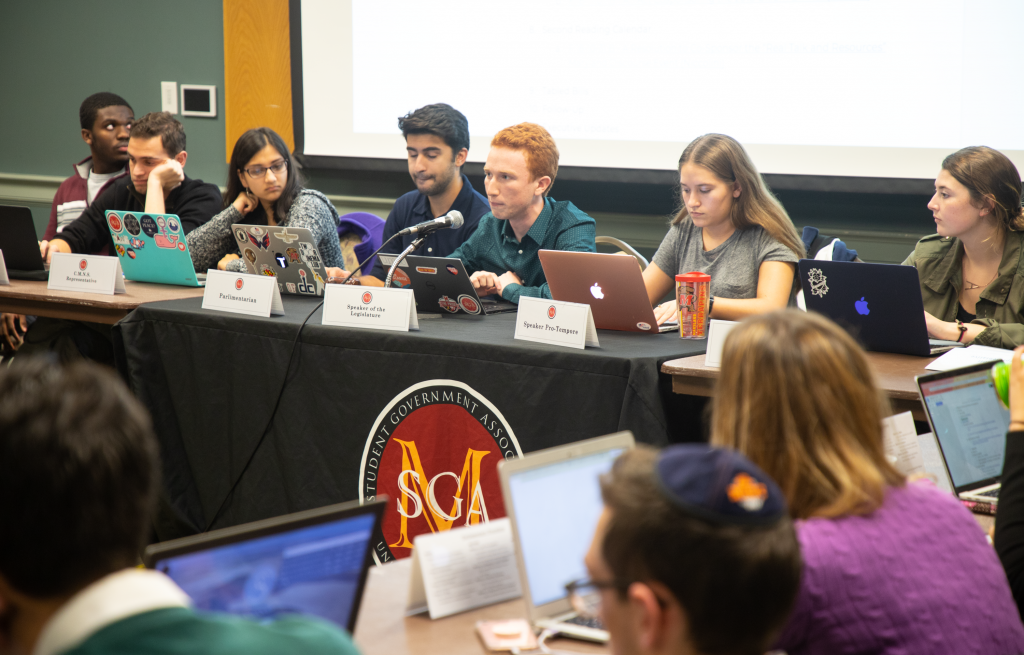 The University of Maryland SGA’s plan to establish cultural liaisons for religious, racial minority and other protected groups of students has hit a wall.

Though the Student Government Association unanimously voted to create the positions nearly three months ago, not one person has been appointed to the roles since then. Meanwhile, the director of the committee charged with recommending liaisons unexpectedly resigned, the body’s president subverted the appointment process and members have called for the posts to become permanent positions.

“It’s kind of indicative of an underlying problem that we have — which is we say we’re making progress and we don’t do it,” said representative Serena Saunders. “That’s the norm across the board.”

[Read more: UMD SGA is bringing back a program to track and address student concerns]

The SGA passed a resolution in December laying out a selection process for the cultural liaisons. The legislation tasked the diversity and inclusion committee with designating which student groups would get a liaison, reaching out to these groups and providing President Jonathan Allen with a list of recommended appointees.

But at the SGA’s Feb. 13 meeting, Allen attempted to tap Senam Okpattah, one of the co-sponsors of the original resolution, as the cultural liaison for the black community — despite the fact that the committee had yet to compile or give him that list.

After extensive debate, the nomination failed, 10-15-4.

Allen said he bypassed the recommended procedure because there are only six weeks left in his term. He said the diversity and inclusion committee never did the outreach or provided the recommendations they were charged with creating.

“I thought it was important also having someone that was already familiar in the organization while piloting that role,” Allen said. “What I tried to do was to appoint a liaison and strengthen the role over the last few weeks of my term, so that when the next administration comes in, they’ll have the role fully fleshed out.”

Many legislators didn’t agree. They expressed concern that the procedure laid out in the resolution was ignored, since there wasn’t any official application process or feedback gathered from specific groups, such as the Black Student Union.

“We don’t want to strike while the iron’s hot,” said first-year representative Margaret Attridge. “We want to have a slower process to make sure we do this right, because there could be a wrong way to do it and that will just hurt us even further.”

Prior to appointing Okpattah, Allen said he didn’t communicate or touch base with the diversity and inclusion committee.

The liaisons — external representatives who would meet with SGA members on a monthly basis to talk to them about “issues of race, diversity, gender issues, religion, sexual orientation, and cultural competency” — were intended to address discontent the legislature noted from some student groups.

Some of this frustration came to the forefront in early November, when a coalition of 24 student groups came together for the “Fire the Liars” rally. The coalition’s protest, which called for new leadership in the university’s administration, was a response to the SGA-led “Justice for Jordan” rally held the previous week, where legislators handed out football tickets and pushed for attendees to show their support for student-athletes.

When the diversity and inclusion committee started discussing the plans for cultural liaisons, members who already had connections to student groups told Taylor Green, the committee’s chair at the time, that many of those groups were already distrustful of the SGA.

“If a narrative shared through many student groups, and many groups of color, is that SGA does not care about them, that SGA uses them, that SGA tokenizes them,” Green said, “moving forward, you need to think about how you change that narrative.”

Since Green’s resignation in early February, the diversity and inclusion committee’s meetings have halted, said Maleeha Coleburn, a committee member.

Coleburn, a junior public policy representative, agreed that distrust was one of the biggest obstacles on the liaison appointments before Green resigned.

“A lot of our work has to do with both what the groups on campus want and what they think they need,” Coleburn said. “If they’re not communicating with us, and if they don’t trust us, then we’re not able to get work done.”

Green attributed her resignation to a number of factors, saying she wasn’t impressed with the SGA’s “culture” surrounding race.

“I honestly cannot tell a black student to join this organization because it would be good for you,” Green said. “So if I can’t tell people to join, why am I here?”

Debate at the Feb. 13 meeting drew attention to the fact that the resolution isn’t binding, since it’s only a recommendation. Attridge and Coleburn think they should be, and have discussed writing legislation to officially make the liaison positions permanent.

“This position is really needed right now, and I think it could increase communication between SGA and our student groups and hold the entire legislature more accountable,” Attridge said. “I know personally as a legislator, I try to make it out to different student groups to kind of see what their feeling. But you can’t make it to all of them — there’s so many.”

But creating new permanent positions requires a change to SGA’s bylaws. Attridge said this couldn’t happen until the omnibus, the last meeting of the legislative session.

For now, Allen said he won’t nominate another liaison, leaving it up to the next president, who will take on their role in May.

“I think that the roles are important — it’s something that I would’ve wanted to get started this semester,” Allen said. “But seeing that [the legislators] are holding up the process, I don’t think it makes sense under the current timeline to go ahead and do so, though I wish I could have.”