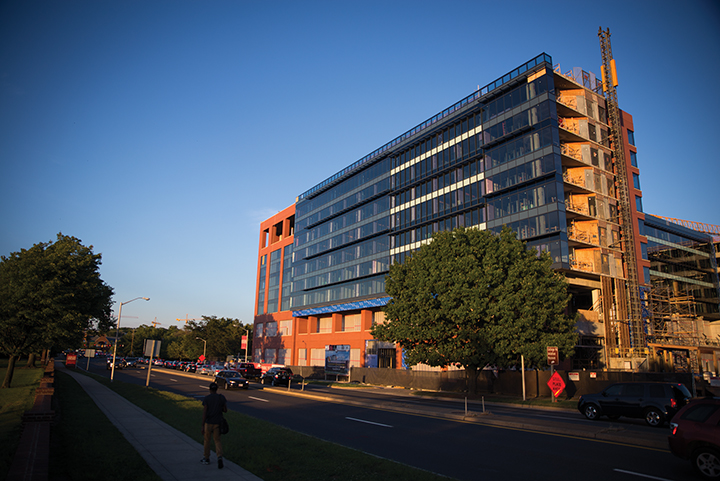 As students become acclimated to the different paths, closures and shortcuts created by on-campus construction at the University of Maryland this semester, they may also be wondering how off-campus developments — such as The Hotel and its neighboring buildings — will affect their experiences.

Numerous officials, including university President Wallace Loh and Prince George’s County Councilwoman Dannielle Glaros, described The Hotel as an “anchor” for this university as well as the entire community, they told The Diamondback in previous articles.

“Calling it a hotel really minimizes its impact,” Ulman said. “It’s really a mix-used building … we are creating a dynamic area in a place where no one really had place.”

The $140 million project will provide more than 43,000 square feet of meeting space while offering variety of restaurants — ranging from upscale dining, such as Franklin’s Grill and Oyster Bar, to more casual eating, like Potomac Pizza, Ulman said.

These eateries, along with the Red Door Spa and other retailers, will attract more people to College Park while also providing students and other individuals with job opportunities, Ulman said.

And this increased foot traffic is exactly what this project is about, Loh said.

“Route 1 right now is not crowded,” Loh said. “Route 1 is crowded with cars — not with pedestrians. I think what I envisioned would happen to [Route 1] … Think of Wisconsin Avenue. It’s a highway no different than Route 1. But when you have cafes on the sidewalk, and retail and people — it’s a bustling place [and] cars slow down.”

Despite these concerns, Wojahn said he has not heard any complaints about traffic or these developments, and said “everybody is pretty excited about it.”

The city and university are encouraging many of these development projects, such as the new art house, which will open at the former site of The Barking Dog. These projects will not only revitalize Route 1, but will also create “a more walkable community” that is “pedestrian-friendly,” university spokesman Brian Ullmann said.

In terms of increased pedestrian safety, Loh said there will be changes to traffic patterns as “people will be crossing in large numbers.” Lowering the speed limit, as well as parking opportunities along Route 1 were also options Loh mentioned.

“Once you have cars parked there, and you have all of that pedestrian traffic, it’s no longer going to be a highway,” Loh said. “The city’s all on board with this.”

The Hotel, especially once the adjacent arts and entertainment hall opens, could be another center for student activity — much like the Stamp Student Union, Loh said, which will leave students “migrat[ing]” between the two.

The arts and entertainment hall, which was announced in March, is another multi-million dollar project opening sometime late spring or early summer. The 15,000 square foot site features a “premier restaurant with an indoor-outdoor stage,” a demonstration kitchen, outdoor classrooms and stages for different types of performances, according to a March 2016 Diamondback article.

“The Hotel with its variety of space, a co-working space in a separate building, all of those buildings will interact well with each other,” Ulman said. “… we’ve spent a lot of time thinking about the entire experience. So it’s really an exciting time to introduce a whole new area into Greater College Park.”